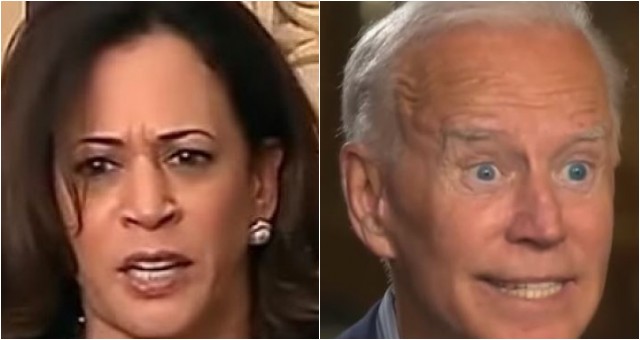 The Democratic candidate for president and his running mate tweeted the street slogan, “Say Her Name,” amid a wave of raucous and sometimes violent protests from coast to coast.

The protests and tweets came after a grand jury in Kentucky did not recommend murder charges against several police officers for the March 2020 shooting death of Breonna Taylor. The announcement prompted sharp objections and triggered a wave of national protests, Breitbart reports.

As our nation continues to erupt into more racial violence that lead to riots, looting and attacks on innocent victims, the Democrats once again, stand with those who are in the streets destroying our cities.

We must continue to speak Breonna Taylor’s name, support her family still in grieving, and never give up on ensuring the full promise of America for every American.

We must continue to speak Breonna Taylor’s name, support her family still in grieving, and never give up on ensuring the full promise of America for every American. https://t.co/KJU21tQq4B

According to the AAPF (The African American Policy Forum), the “SayHerName Campaign” started in 2014.

Launched in December 2014 by the African American Policy Forum (AAPF) and Center for Intersectionality and Social Policy Studies (CISPS), the #SayHerName campaign brings awareness to the often invisible names and stories of Black women and girls who have been victimized by racist police violence, and provides support to their families.

As Breitbart reported, Biden made a second statement in which he encouraged people to “say her name” and eluded that justice was not served and that the way our Police deal with people in our nation has to be changed.

Breonna Taylor was a beloved daughter, member of her community, and an essential worker who served as an E.M.T. as COVID-19 began to spread. But she died, shot in her own home by the police. In the wake of her tragic death, we mourn with her mother, family, and community and ask ourselves whether justice could be equally applied in America.

I know for so many people today’s decision does not answer that call. A federal investigation remains ongoing, but we do not need to wait for the final judgment of that investigation to do more to deliver justice for Breonna. We know what is necessary. We need to start by addressing the use of excessive force, banning chokeholds, and overhauling no-knock warrants. I know people are frustrated and they have a right to peacefully protest, but violence is never acceptable. And we can express pain, grief, anger, and disappointment at the way things are, but remain focused on rebuilding trust in our communities and delivering change that can be.

We must continue to speak Breonna Taylor’s name, support her family still in grieving, and never give up on ensuring the full promise of America for every American.

Of course Kamala Harris, who has been influential in not only her donations to Black Lives Matter but also publicly standing with those who “take to the streets for justice”, told the nation we must change our nations Police and “speak her name”.  As reported by Breitbart

Tonight, I’m thinking of Breonna Taylor’s family who is still grieving the loss of a daughter and sister. We must never stop speaking Breonna’s name as we work to reform our justice system, including overhauling no-knock warrants.

Tonight, I’m thinking of Breonna Taylor’s family who is still grieving the loss of a daughter and sister.

We must never stop speaking Breonna’s name as we work to reform our justice system, including overhauling no-knock warrants.

Instead of using their public forum to call for an end to the chaos, they chose, once again, to add fuel to the fire for more people to take to the streets and demand defunding and changing our nation’s police departments.