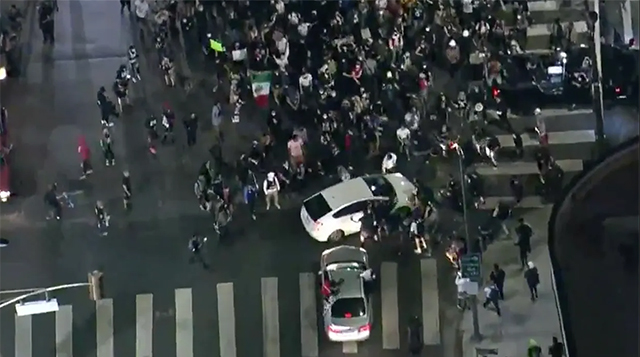 Shocking video shows a giant Black Lives Matter lynch mob in Hollywood, California on Thursday night surround a Prius driver, attack his car, chase him down with a truck, pin him in and then get out and try to pull him from his vehicle while smashing his windows with a skateboard, flag and even a bicycle.

When the man remarkably managed to somehow escape with his life and not injure any of his assailants, he proceeded to peacefully surrender to the police who were seen putting him in handcuffs!

MOMENTS AGO: Prius drives through a protest in Hollywood, protestors then chase the vehicle down, smash the windows with a skateboard while attempting to pull the driver out of the car. The driver then speeds away and is pulled over by LAPD and handcuffed. @NBCLA @elianamoreno pic.twitter.com/OZuU1r8QoG

WATCH: A person driving a white Prius was chased down and by protesters after trying to drive through the crowd in #Hollywood. The group that chased the driver began hitting the car and possibly broke a window. @RoadSageLA was overhead in #Sky9 as it happened. #CBSLA pic.twitter.com/OYFMOezUpx

JUST IN FROM @LAPDHQ ⬇️ https://t.co/M1PNSptYFM

The LAPD released a ridiculous statement saying the “protesters” were “largely peaceful” up until the whole lynch mob incident (for which no one appears to have been arrested):

On the evening of September 24, 2020, approximately 7:00 p.m., a group of more than 300 protesters marched through Hollywood. While there were isolated reports of vandalism, the group was largely peaceful. The group eventually made its way onto Sunset Boulevard.

Shortly after 9:00 p.m., a blue pick-up truck traveling on Sunset Boulevard maneuvered through the crowd and became involved in an altercation. As the driver of the pick-up truck attempted to get away from the situation, he struck a protester standing in the street. That individual was transported to a local hospital with minor injuries.

Moments later, a white Prius attempted to drive around that same protest and also became involved in an altercation with individuals in the crowd. A black pick-up truck leading the protests accelerated and pinned that white Prius in, forcing it to come to a stop. The driver of the Prius attempted to flee the area and reversed into a green mustang behind it. That vehicle was also participating in the protest.

Both the drivers of the pick-up truck and the green Mustang attempted to extract the driver of the Prius from his vehicle. However, that driver was able to get away from the scene.

Several blocks away, that motorist was detained by Hollywood officers. There were no injuries associated with that second incident.

All of the drivers and victims involved in both altercations have been identified by Hollywood Officers and the investigation is on-going.

The Prius driver got into an “altercation” and the lynch mob that hunted him down were part of the “protests.”

I wonder if the city of Los Angeles will appoint Frederick Franklin as a special prosecutor to bring the victim up on charges?