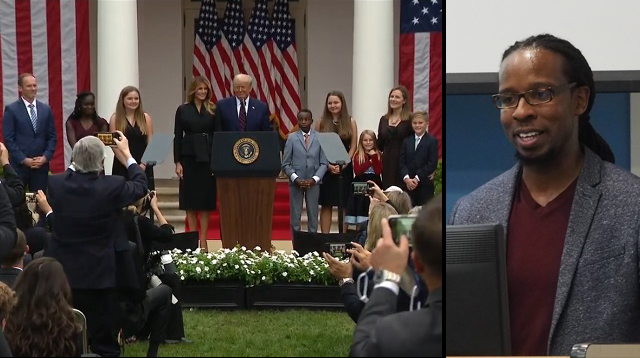 If you’re not familiar with Kendi’s work, he is pretty much Ashleigh Shackelford with 10 more IQ points and a thesaurus.

“Some White colonizers ‘adopted’ Black children,” Kendi said on Twitter after it became clear Barrett was President Trump’s pick for the Supreme Court. “They ‘civilized’ these ‘savage’ children in the ‘superior’ ways of White people, while using them as props in their lifelong pictures of denial, while cutting the biological parents of these children out of the picture of humanity.”

Some White colonizers "adopted" Black children. They "civilized" these "savage" children in the "superior" ways of White people, while using them as props in their lifelong pictures of denial, while cutting the biological parents of these children out of the picture of humanity. https://t.co/XBE9rRnoqq 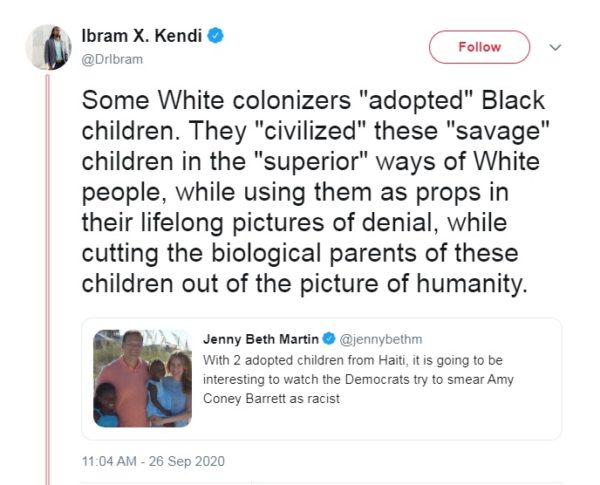 After people pointed out the picture he shared was not of Barrett but instead her sister Carrie, he said it doesn’t matter (facts never do).

“And whether this is Barrett or not is not the point,” Kendi said. “It is a belief too many White people have: if they have or adopt a child of color, then they can’t be racist.”

According to Kendi, all white people are racist and all his critics are Russian bots.

Earlier this month, the Washington Free Beacon did a deep dive into what Kendi has done with all the money he’s been handed and learned the answer was very little.

For the afternoon crowd, my deep dive on Ibram Kendi's last research center. It took 100s of 1000s of $ for projects which never happened; instead, it ran swanky galas and book festivals. This hard work got Kendi $10 million from @jack for his new outfit.https://t.co/AtyMdh1wVg

It appears these grants are nothing more than a way for wealthy, privileged elites to buy their way into “oppressed minority” and “woke ally” status.

In August 2019, as young journalists agitated for their newsrooms to pivot toward social justice, Dr. Ibram X. Kendi’s research center at American University secured a $50,000 grant from the Ford Foundation to develop a “racial reporting guidebook” to help the media hew to Kendi’s “antiracist” principles.

The school touted the grant as one of its 2019 achievements, and Kendi’s academic perch at AU, the Antiracist Research and Policy Center, proudly advertised on its website a fall 2019 symposium on “racial reporting.”

But neither the guidebook nor the symposium ever materialized—further details were promised well into 2020. The project’s mysterious disappearance is but one instance in which Kendi and colleagues’ big promises never came to fruition.

Over the past half decade, Kendi has become liberal America’s guiding light on the academic study of racism. He has written three bestselling books, published op-eds in the New York Times and Washington Post, and has been named a contributor to the Atlantic and CBS News. But the glitzy academic center at which he roosted for much of that time produced no real academic research.

Instead, the ARPC hosted a swanky gala honoring liberals from George and Amal Clooney to Barack and Michelle Obama, as well as “conversations” with people such as Black Panthers founder Bobby Seale. And it ran an “antiracist confessions board” on which students and administrators were encouraged to overcome the “denial” that characterizes racism by “confessing” the details of their “journey” to being antiracist.

Attacking Barrett for adopting Black children is an interesting response for leftists but apparently they’ve decided to run with it.

"I was glad her two kids did come out, I couldn't find too many other people of color in that audience."pic.twitter.com/uH7gEdzfy9

Read this from Democrat activist & Hill staffer. Questioning whether #AmyConeyBarrett *illegally* adopted her children from Haiti, maybe snatching them from birth parents! This is the Dem gameplan. Nothing but raw bigotry and hate. I promise you, this will not stand pic.twitter.com/JEMqhe05dY