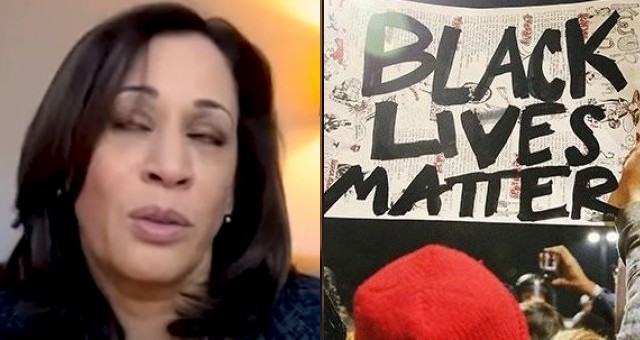 Harris said in a speech during the NAACP’s national convention:

Kamala Harris has been very vocal about Black Lives Matter while ignoring the riots and looting going on all across our nation.  She has not only encouraged people to take to the streets and continue “protesting”, she has donated money to bail out any who get arrested.

She added that protests were “necessary” as “the people’s voices must be heard, and it is often the people who must speak to get their government to do what it is supposed to do, but may not do naturally unless the people speak loudly — and obviously peacefully.”

Harris also praised the “brilliance” and “impact” of “Black Lives Matter,” which has received media praise but also come under fire for promoting left-wing stances like opposing the nuclear family. “I actually believe that ‘Black Lives Matter’ has been the most significant agent for change within the criminal justice system,” she said.

Some may claim that this is just part of the democratic ticket to combat President Trump and pave their way into The White House.  While clearly that holds some validity, it goes far beyond that and is not only costing our nation millions, it is destroying peoples lives and people are getting violently attacked and some killed.

It is beyond baffling that she can continue to gaslight the hate and chaos in our nation and do so openly and with no accountability.   These politicians are supposed to work for “We The People” and our nation, that means finding the peaceful solutions to the issues that plague our nation.

Across the country, violent confrontations during these demonstrations have led to deaths and injuries, including for demonstrators, journalists and police officers. In Louisville, Kentucky, two officers were shot, and subsequently hospitalized, during protests surrounding Taylor’s case.

Former Vice President Joe Biden and other Democrats have been criticized for allegedly not doing enough to denounce violent demonstrations, while President’s Trump campaign has attempted to tie their statements to on-going riots.

Trump, in his GOP nomination address Thursday night, alleged Biden and his allies were “completely silent” on the riots – noting the issue was glossed over at their own convention a week earlier – and are only starting to mention it now for political reasons.

“It is too late, Joe,” Trump declared.

I have read that all of the insanity will come to an end after the elections, all the chaos in the streets and even the pandemic.  That is not what I personally see, I don’t see a global pandemic starting simply for our elections and to remove Trump and I don’t see Antifa and Black Lives Matter just vanishing after President Trump wins another 4 years.