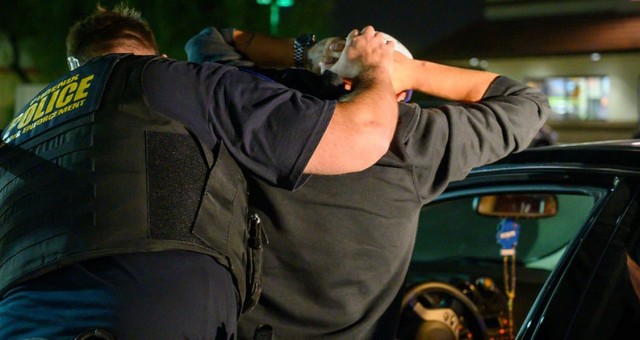 Tonight the streets in America are safer after 140 violent fugitives including at least 50 gang members were arrested and locked up as part of a massive sting.

This operation was presented to Phoenix PD, and the task force partners, as a targeted enforcement initiative focused on combating the crime spikes seen in parts of the metro area during the pandemic period. The highly successful results of Operation Snake Eyes provided local communities relief as those who preyed upon and terrorized our citizens were arrested along with their tools of criminality seized.

“One issue that most people will agree with while debating police issues, is that those who intentionally and indiscriminately cause harm, murder, and terrorize citizens should be a priority of the criminal justice system. Operation Snake Eyes focused on gang member, violent criminals, and communities with a high degree of violent gun related crimes,” said United States Marshal David Gonzales. “This evidence-based approach to violent crime has shown to be an effective strategy in reducing crime and helping in make our communities safer.”

Dubbed Operation Snake Eyes, this 6-week enforcement initiative led to the arrest of 140 violent fugitives, 51 of whom are gang members. Additionally, 131 firearms and $145,831 in cash was seized along with 3,027 counterfeit Fentanyl pills which were taken off the streets. This decidedly effective operation partnered Detectives, Troopers, Agents, Prosecutors and Deputy Marshals from the Phoenix Police Department, Glendale Police Department, Mesa Police Department, Tempe Police Department, the Department of Public Safety, the Bureau of Alcohol, Tobacco, Firearms and Explosives, and the United States Attorney’s Office.

The goal of Operation Snake Eyes was to focus on communities impacted by significant gang presence and target the most violent gang members and organizations to combat crime and violence associated with gang activity. The operation employed a systematic and sustained approach to target and arrest fugitives wanted for higher level felony crimes including homicide, robbery, weapons offenses, dangerous drugs and aggravated assault.

In 2010, the United States Marshals Service identified gangs as a priority within its violent crime reduction strategy and made a commitment to reinvigorate its gang enforcement efforts. As a result, Operation Snake Eyes focused on three main areas: fugitive investigations; targeted firearm and drug investigations (the tools of the trade for gang members); and proactive street investigations and patrols. Communities are made safer by this unique cooperative relationship with federal, state, and local law enforcement partners to locate and apprehend the criminals most responsible for crime and violence in those communities.

“I am proud of the men and women of the Phoenix Police Department for their dedication to our community,” said Phoenix Police Department Chief Jerry Williams. “Investigations like these bring so many partners together to address common crime trends in each of our cities. Working with intelligence driven information allow us to specifically target those individuals who are responsible for crimes which often result in violence.”

“The success of Operation Snake Eyes is a testament to the hard work and collaborative effort of our law enforcement partners,” said United States Attorney Michael Bailey. “As prosecutors we are proud to serve alongside these dedicated men and women, as well as our colleagues at the MCAO, in seeking justice against gang members and violent offenders in our state.”

The following arrests are examples of the type of career criminals focused on during this operation:

Miguel Botello was arrested during Operation Snake Eyes on the charge of illegal drug sales, specifically fentanyl, to undercover Detectives. Botello is a documented member of the Westside Hollywood 39th Avenue criminal street gang. The Phoenix Police Department along with the U.S. Marshals Service Task Force members initiated a fugitive investigation. On September 2, 2020, Botello was located near 51st Avenue and McDowell Roads. Botello was taken into custody and during a search, Botello was found to be in possession of $36,351. 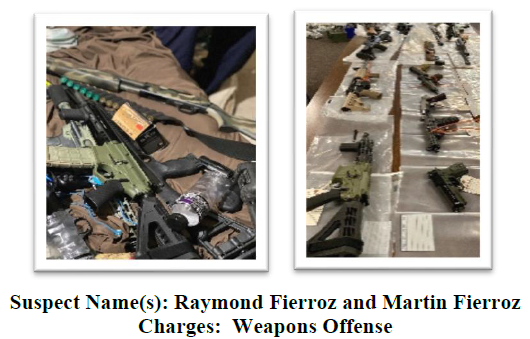 Brothers, Raymond Fierroz and Martin Fierroz were arrested during Operation Snake Eyes on the charges of weapons offenses. Both Fierroz’s are documented members of the ICG criminal street gang. The Phoenix Police Department, the Department of Public Safety, ATF and U.S. Marshals Service Task Force members initiated a criminal investigation. On August 26, 2020, a search warrant was served at a residence near 73rd Avenue and Turney Avenue where the Fierroz’s were taken into custody. The search yielded 16 firearms, 1302 fentanyl pills, 347 Xanax pills, $3,495 in U.S. currency, a ballistic vest and 20,000 rounds of ammunition.

David Medina was arrested during Operation Snake Eyes on the charges of possession of dangerous drugs, misconduct involving weapons and probation violation. Medina is a documented member of the Mini Park criminal street gang and Mexican Mafia prison gang. The Phoenix Police Department along with the U.S. Marshals Service Task Force members initiated a fugitive investigation. On August 18, 2020, Medina was located near 34th Avenue and Holly Street. Medina was taken into custody and during a search, Medina was found to be in possession of a handgun and a loaded 50 round drum magazine and illegal drugs.

Thomas Lee was arrested during Operation Snake Eyes on the charges of 2 counts aggravated assault with a firearm, unlawful flight from law enforcement, misconduct involving weapons, assisting a criminal street gang, discharging a firearm at an occupied structure, possession of a firearm during the commission of a drug offense, possession of marijuana. Lee is a documented member of the Southern Bloods criminal street gang. It is alleged, that on August 28, 2020, Lee fired multiple rounds from a rifle toward a residence and surrounding vehicles. The Phoenix Police Department, ATF, and U.S. Marshals Service led Arizona WANTED Violent Offender Task Force initiated a fugitive investigation. On September 9, 2020, Task Force members attempted a traffic stop on Lee’s vehicle who failed to yield and drove away. Lee later ditched the vehicle near 20th Street and Southern Avenue before attempting to flee on foot. Lee was taken into custody and during a search and was found to be in possession of a rifle, a handgun, $7,540 in U.S. currency and a narcotics scale.

“Operation Snake Eyes is another example of the longstanding beneficial relationship with the U.S. Marshals Service. Members of the Mesa Police Department Special Operations Division including the Gang Unit, the Violent Offender Unit, and the Major Crimes Unit, working with the U.S. Marshals Service, continue their consistent, day-to-day work investigating violent and gang crimes during this operation,” said Mesa Police Chief Ken Cost. “Partnerships such as this are the way to combat modern violent crime, which has no city borders. The U.S. Marshals have always been consistent partners in this ongoing fight against violent crime.

ATF Special Agent in Charge Gabriel Pinon added, “The success of this operation is attributed by combining the resources of the various agencies, we are able to accomplish many things that one agency by itself would be hard pressed to achieve. When law enforcement and the public join forces, each are doing their part to ensure the safety of our communities. This is truly a team effort.”

The Arizona WANTED Violent Offender Task Force is a U.S. Marshals Service led multi-jurisdictional fugitive apprehension unit responsible for more than 1748 arrests in the last year. The task force is comprised of 22 agencies bringing together the resources of federal, state and local law enforcement agencies to locate and arrest the community’s most violent offenders and sexual predators.

We want to thank the brave men and women who have dedicated their lives to protecting Americans 24/7/365.