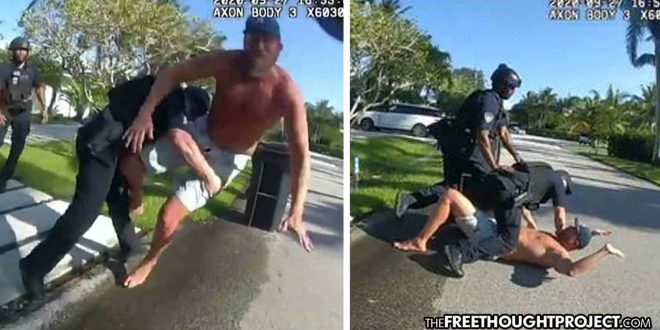 Fort Lauderdale, FL — On Sunday, shocking news broke of the former campaign manager for Donald Trump. Brad Parscale had reportedly barricaded himself inside his home in a standoff with police. On Monday, body camera footage was released showing the incident.

On top of the body camera footage, police also released the 911 call which led up to the incident. The entire ordeal started when Parscale’s wife’s called police for help and police saw cuts and bruises on his wife that she said were caused by Parscale.

As the Sun Sentinel reports:

The encounter with police started Sunday afternoon on DeSoto Drive, where Parscale, 44, lives with his wife, Candice Parscale. The couple had argued, and Candice Parscale said her husband chambered a round into a pistol during a heated exchange between the two.

It’s unclear what they were arguing about, but she said she fled the house in fear and asked a realtor, who was about to show a nearby house, for help. The realtor called the cops.

On the phone, Candice Parscale told a 911 dispatcher that she heard a gunshot shortly after exiting her home, and was afraid her husband was going to kill himself. Later, she told an officer she couldn’t be sure if it had been a gunshot, or a car backfiring.

“Oh no, did he do that? Oh my gosh, your arms, both your arms, has he been hurting you?” the realtor can be heard asking Candice.

Candice told police that her husband suffers from PTSD and had multiple guns in the home. Luckily for Brad Parscale, he had a personal friend — who is a cop — Officer Christopher Wilson, show up with other officers who helped to diffuse the situation. Police were well armed, including donning AR-15s with silencers, and appeared ready to pounce.

While he wasn’t shot or killed, Brad Parscale did find himself on the receiving end of a violent police takedown.

As the video shows, Officer Timothy Skaggs was the first on scene and called Parscale after talking to his wife. He reported that “Bradley’s speech was slurred as though he was under the influence of an alcoholic beverage and he seemed to be crying.”

“Can you come outside with no weapons please?” Skaggs said.

Brad Parscale did not immediately emerge from the home, instead he paced and raved, according to the police report.

“I called Brad on the phone and asked if he would come out and speak with me,” Wilson writes in a police report.

As the video shows, Brad Parscale appeared in front of his home and seemed extremely intoxicated before he received a hefty tackle from one of the officers on the scene.

Brad Parscale was shirtless, shoeless, was complying and had his hand up when an officer tackled him from behind, sending him crashing into the pavement.

“I didn’t do anything!” Brad Parscale yelled repeatedly, in a display that many would call extremely ironic.

As the Sentinel reports, he was involuntarily committed for psychiatric evaluation under Florida’s Baker Act, a law that allows authorities to detain a person deemed mentally unstable and a danger to themselves or others at a mental health facility for up to 72 hours.

In one of the comments on the video, released to the police department’s Youtube page, a user pointed out yet another ironic point.

“If you ever wanted to see a white man change his mind on why “defund police” is a thing….start watching at @2:28″

Indeed. It will be interesting to see how the pro-cop MAGA crowd spins this one.