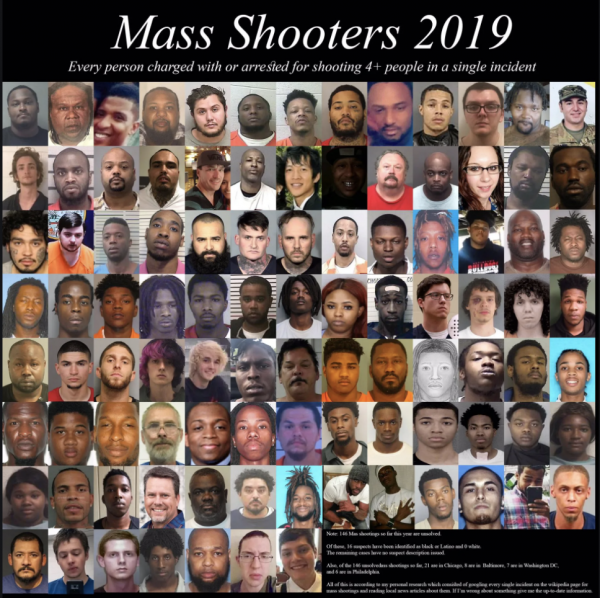 Previously on SBPDL: Between July 16 and July 28th, 2019, There Were 36 Mass Shootings Across the United States: Blacks Were Suspects in 34 of Them

So what does this article, showcasing the vast majority (disproportionate amount) of mass shootings in America happen in majority-black communities, leave out? See if you can find it.

This summer’s Rye Day celebration in Syracuse, New York, almost ended — as it had the past 14 years — without a hitch. The event, a public birthday party hosted by a local business owner and philanthropist, drew hundreds of residents to an outdoor performance space on June 20 on the city’s Near West Side, where they ate and drank, registered to vote, and escaped the various pressures of the pandemic.

But then a scuffle broke out. A Facebook Live stream shows a girl dancing, then noticing the commotion. “It’s a fight,” someone remarks, off camera. “Time to go.” The girl in the video agrees, playfully, but her concern escalates. The music stops. People scream. The crowd scatters, and the video turns into a whir of bodies and grass. Seconds later, more than a dozen gunshots ring out.

“It was chaos,” said Nitch Jones, a local youth pastor who was at the center of the crowd. “You had wounded individuals, wounded friends, family members, associates on the ground, all crying out for help. People experiencing someone who looks like they’re dead. People experiencing trauma for the first time.” At the scene, Jones rushed to help the wounded. He spotted a body lying motionless on the asphalt. It was a boy who had been shot in the head. Jones helped calm the boy’s family until paramedics arrived, and wheeled his body to an ambulance. Photos from the aftermath show a woman standing in a haze of red light from the vehicle’s sirens. She’s barefoot, wearing a shirt with the words “Proud Mom” emblazoned on its back.

Her son, Chariel Osorio, had graduated from high school earlier that day. He was 17 years old. Less than a week later, he died of his injuries in a hospital bed.

Osario and the eight victims wounded in the Rye Day shooting are among more than 320 people killed and over 1,600 injured in mass shootings so far in 2020, according to the nonprofit Gun Violence Archive. What constitutes a “mass shooting” varies between government agencies and groups like Gun Violence Archive, which defines the incidents as any with four or more people wounded. Our analysis of Gun Violence Archive data found a total of 395 mass shootings as of August 24, an almost 45 percent increase over the same period last year. If the pace holds, this year’s total will be the highest tally since the organization began tracking shootings seven years ago.

Every act of violence shocks the conscience, but the public setting of many mass shootings renders them acutely horrifying. People pursuing an activity presumed safe – going to church or school or the store, putting in a workday, enjoying a night out – suddenly confront a barrage of bullets. The ensuing media coverage stirs public mourning and donations. Activists and Democratic politicians cry for reform. But when a gunman in a dispute kills or injures multiple bystanders in a predominantly Black or Latinx community, the bloodshed is written off by some journalists, politicians, and onlookers as predictable, endemic to the neighborhood and therefore not worthy of the same sympathy.

Figure it out? The salient point this article leaves out regarding who is doing the shootings in this majority-black neighborhoods of the USA, accounting for the vast majority of mass shootings in America?

It’s not white people in blackface gunning down black people – though many conspiracy theories abound such a plot is happening in Chicago – but individual black people responsible for the violence in all of these majority-black communities, that make up where the bulk of mass shootings in America occur.

Such information should guide sane gun control polices in America. Instead, gun control is all about disarming law-abiding white people.