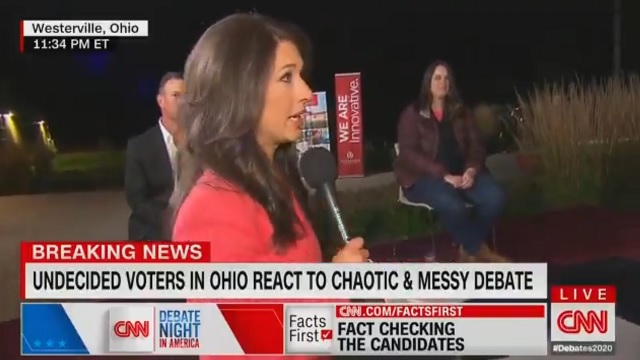 CNN on Tuesday night asked a panel of “undecided voters” in Ohio if the first presidential debate had a clear winner and then downplayed the results as meaningless after only one person raised their hand for Joe Biden.

CNN asks their 'independent panel' if there was a clear winner…
Only One person raises their hand for @JoeBiden LOL #Debates2020 pic.twitter.com/Fq7QhUR1x6

“The big question here is was there a clear winner from this group?” CNN host Ana Cabrera said.

“Raise your hands if you thought Joe Biden won the debate.”

“Show of hands if you thought Donald Trump won the debate…”

CNN’s camera man refused to pan over the full group as he did with Biden and chose to cut off half the group so viewers couldn’t see how they voted.

Cabrera refused to say how many raised their hands for Trump but the video shows at least two in the middle of the group did, meaning he got at least double Biden’s support.

“And of course, that doesn’t necessarily mean that those people who are raising their hands have made up their minds at who they’re going to vote for,” Cabrera blurted out.