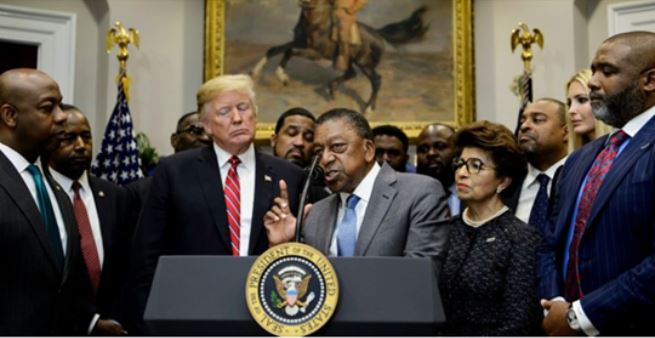 “Where I come out as a businessman, I will take the devil I know over the devil I don’t know any time of the week,” the billionaire businessman said.

“I know what President Trump has done and what he’s said he will do. I don’t know what Vice President Biden has said he will do other than masks, listen to the scientists,” he said. The 74-year-old also added “pandemic safety” versus “economy growth” in response to how the coronavirus will be handled, 100 Percent FED Up reports.

Johnson went on to say, “As for black Americans we vote consistently 90% for Democrats. But if we don’t get clear and concise direction on the benefit of changing courses at this time. Again, I am speaking as a business person. I would rather know who I am going to deal with in the White House. I want to know what regulatory decisions they’re going to make. What fiscal policy decisions. What monetary policy decisions they’re going to make than be taking a chance.”

Here is a portion of his interview:

"I would take the devil I know over the devil I don't know anytime of the week, and that seems to be what business people are confronting today," says BET Founder Robert Johnson. "I'm not endorsing anybody." pic.twitter.com/XnXTxNSKlD

Johnson has been known as a big Democratic supporter but does support some of Trump’s policies. In 2019, the first Black Billionaire told CNBC that Democrats have moved “too far to the left,” in his view.

We previously reported that Johnson slammed Biden for his “arrogant and out of touch attitude” for his comment “If you have a problem figuring out whether you’re for me or Trump, then you ain’t black.”

“VP Biden’s statement today represents the, arrogant and out-of-touch attitude of a paternalistic white candidate who has the audacity to tell Black people, the descendants of slaves, that they are not Black unless they vote for him. This proves unequivocally that the Democratic nominee believes that Black people owe him their vote without question; even though we as Black people know it is exactly the opposite. He should spend the rest of his campaign apologizing to every Black person he meets.”

Apparently the BET founder is exactly a Joe Biden fan!