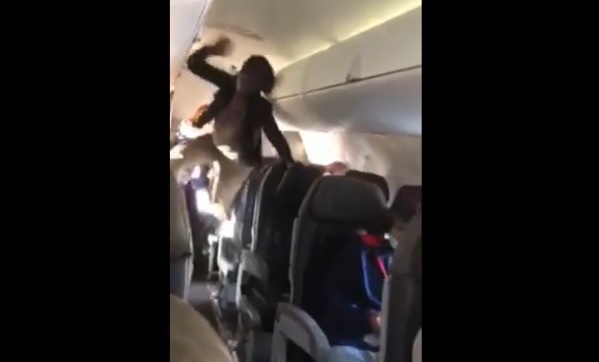 (Natural News) Perhaps it was lack of oxygen due to her mask, or maybe she just needed deliverance from some type of demonic possession. Whatever the case may be, a deranged woman traveling on a commercial flight to Detroit the other day had an Exorcist-style meltdown in the cabin that left other passengers and flight crew shell-shocked.

Video footage shared by World Star Hip Hop – be warned, the footage is very graphic and full of vulgarity, and is not suitable for younger viewers – shows the unidentified woman climbing over seats with her legs arched across the aisle, mask pulled down, screaming obscenities and gyrating like a scene out of the 1973 thriller The Exorcist.

Flipping around and climbing wherever she could grab hold, the woman at one point kicked out an overhead luggage bin, knocking out items and putting other passengers at risk of injury. She also mounted two armrests and began screaming, “B******, we’re going to f*** all night!” while howling, screeching, and banging whatever was around her.

The woman did not appear to be targeting anyone in particular with this horrific display, but her movements did put others at risk, prompting two men to eventually approach the woman in order to lead her off the aircraft. Other passengers were seen pretending as though they were unaware of what was going on, trying to avoid being kicked or punched while they waited for someone else to do something.

Reports are very vague as to which airline was involved, and what ended up happening to the woman. But we wanted to bring it to your attention to show that people are increasingly having meltdowns and displaying overtly demonic behavior in public places, a sure sign of the times in which we live.

“Commenters on World Star Hip Hop compared the freak-out to the memorable exorcism scene from the 1973 horror classic, in which a possessed 12-year-old girl (portrayed by actress Linda Blair) performs a series of bizarre acts,” writes Tamar Lapin for the New York Post.

Is demonic possession on the rise?

Far from humorous, this woman’s behavior would seem to be a powerful example of what Dr. Richard Gallagher, a researchers with degrees from both Princeton University and Yale University, warned back in 2018 was fast-becoming an epidemic of demonic possession.

According to Gallagher, demonic possession is very real and exceptionally rampant in today’s world. A private psychologist, Gallagher is well-versed in behavioral abnormalities, and claims to be able to discern between human and non-human characteristics of evil.

Many people who are demonically possessed, he says, were outsmarted by demons that are far more advanced cognitively than the average human. In many cases, demon-possessed people, which possibly includes the woman on the airplane, do not even know that they are under demonic influence when they are committing horrors in front of, or against, other people.

“They’re very, very smart,” Gallagher is quoted as saying. “The intelligence level of a fallen angel, which is what I call them, is far superior to human beings.”

With that said, looking closely at the aforementioned video footage reveals striking behavioral abnormalities that are suggestive of demonic possession – hence why many are asking what may have possessed the woman to act that way, for no apparent reason.

With escalating social conflict, continued lockdowns and mask restrictions, and other societal upheavals barraging people day in and day out, with no end in sight, we can only speculate that such behavior will only continue to become more mainstream as people become increasingly unhinged.

More related news stories can be found at DemonicTimes.com