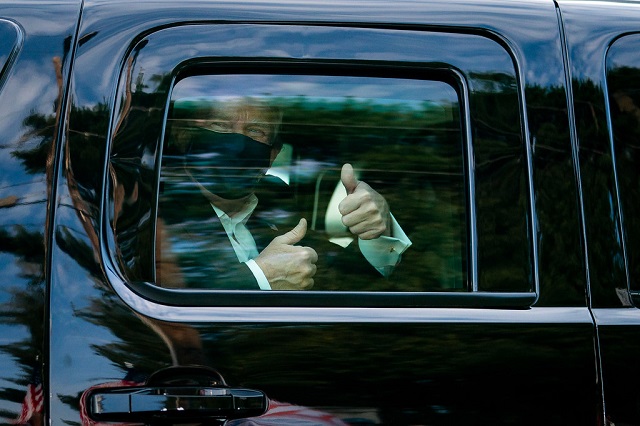 Will President Trump’s “October surprise” be lifting the tyrannical lockdowns across the country and demanding life go back to normal?

“Don’t be afraid of Covid. Don’t let it dominate your life. We have developed, under the Trump Administration, some really great drugs & knowledge. I feel better than I did 20 years ago!” Trump said.

I will be leaving the great Walter Reed Medical Center today at 6:30 P.M. Feeling really good! Don’t be afraid of Covid. Don’t let it dominate your life. We have developed, under the Trump Administration, some really great drugs & knowledge. I feel better than I did 20 years ago!

I suspect the steroid they put him on probably has a lot to do with him feeling great, it’s the comedown which is going to be an issue.

Regardless, our president is 74-years-old and is, shall we say, a man “of size.”

If he is to be taken at his word, his tackling CV with some of the latest experimental drugs in development in 4 days is a very good sign.

“You see it in enthusiasm for the President outside Walter Reed Hospital. You see it in Registrations, from Florida to Pennsylvania & West Virginia, where Republicans are outstripping Democrats by 2 to 1. If the President bounces back onto the campaign trail, he will be an….

….invincible hero, who not only survived every dirty trick the Democrats threw at him, but the Chinese virus as well. He will show America we no longer have to be afraid.” @MirandaDevine @NYPost  Thank you Miranda. Was over until the Plague came in from China. Will win anyway!

Another indicator Trump may push for lockdowns to be lifted is that Florida Gov. Ron DeSantis, who often follows Trump’s lead, started aggressively lifting his state’s lockdown measures just 10 days ago.

Florida Gov. Ron DeSantis says he's lifting all restrictions on businesses statewide that were imposed to limit the spread of the coronavirus.

That means restaurants and bars in the state can now operate at full capacity.https://t.co/97dvZOwRuo

This lunacy has gone on far enough.

Since the lockdowns were implemented we’ve seen:

– Nationwide rioting and social upheaval
– Massive wealth consolidation by Big Tech and the destruction of small businesses
– An “unprecedented” surge in suicides
– An explosion in online prostitution though sites like OnlyFans
– Around 210,000 deaths from coronavirus in a nation of 328,000,000 (if the CDC’s official numbers are to be taken at face value)

These lockdown policies were an absolute disaster and whether they saved any lives has not been scientifically proven.

(On the bright side, our medical “experts” were completely discredited when they signed on to supporting mass protests amidst a supposed “pandemic” and declared “racism” a more serious public health crisis.)

I think it was reasonable to take extreme measures in December or January when we had no idea what this virus was (was it a leaked bioweapon? a new black plague?) but it’s been clear for many months now the only people who statistically face any particularly serious risk are elderly people and those with pre-existing conditions.

Joe Biden, who himself has been on lockdown for months now to avoid making any gaffes, wants to keep the lockdowns going indefinitely, probably until we can get that experimental vaccine Zeke Emanuel promised back in April.