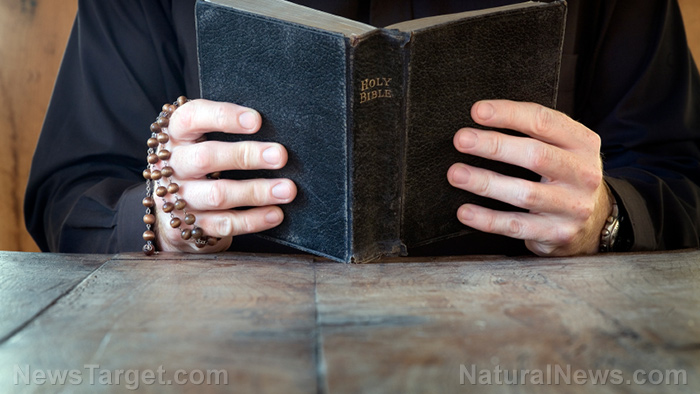 (Natural News) The Chinese Communist Party (CCP) sentenced a Chinese Christian online bookstore to seven years in prison and ordered him pay a 200,000 RMB ($29,450) fine for “illegal business operations” on Sept. 27. In addition, authorities confiscated Chen’s iPhone and the Linhai City Public Security Bureau is set to destroy 12,864 books seized from his bookstore, according to a document obtained by Father Francis Liu of the Chinese Christian Fellowship of Righteousness.

Authorities previously detained Chen in September of 2019 for selling unapproved religious publications imported from the U.S., Taiwan and other countries. Following his arrest, authorities conducted a nationwide investigation to track down buyers who purchased Christian, resulting in the confiscation of books from customers who purchased from his online shop.

The CCP previously banned the sale of bibles in Chinese e-commerce platforms. Following that, it announced that the Bible would be reinterpreted to conform to “Chinese-style Christianity,” in line with Chinese President Xi Jinping’s goal to “sinicize” religion.

International Christian Concern regional manager for Southeast Asia Gina Goh said: “The sentence for Mr. Chen Yu shows how the Chinese government is increasingly frightened by all things religious. From religious symbols, Chinese couplets, to Christian books, anything that features religious elements is no longer tolerated.”

Open Doors USA President and CEO David Curry spoke out against the persecution experienced by Chinese Christians in a January 2020 blog entry. He mentioned that the “tightening on the Christian community in China” stemmed from the fear that Chinese Christians who follow Jesus “have a greater allegiance to Him” than the CCP.

“Every once in a while, the Chinese government will arrest some pastors, or shut down churches, or do something aggressive like take down crosses from steeples,” he said. “But more often, the way they squeeze the church is quieter – and perhaps deadlier.”

He further remarked that Jesus “doesn’t fit nicely” with a government such as that of China’s, which mandates “allegiance to a Communist state above everything.”

In an interview with Bitter Winter, a Shenzhen pastor who was summoned by the local security bureau for buying from Wheat Bookstore said that “people who buy Christian books are practicing believers, so the government looks into them to determine how dangerous they are to the stability of a regime.” The Shenzhen pastor leads a house church, a group of worshippers unaffiliated with Chinese state-approved Christian organizations. (Related: Communist Chinese government announces bounty rewards for informants who identify Christians to be “disappeared” by the regime.)

The CCP’s crackdown on Christianity is not just limited to restricting the circulation of books and other print media. It has also extended online, with the so-called Great Firewall of China banning online Christian content. A September 2018 report by The Straits Times mentioned new regulations being enforced by the Chinese government over the kinds of religious content being posted online – including Christianity.

The new rules drafted by the Chinese religious affairs bureau state that members of officially licensed organizations are the only ones allowed to post-religious content online; overseas individuals or groups are proscribed to propagate “religious information” in China. Furthermore, individuals are not allowed to post links, videos, photos and text related to preaching and other religious activities – with violations to be handled “according to law.”

The rules on religious content aimed to promote “social stability” and stop “religious fraud, cults and appeals to ‘extremism.’”

Read more news about the CCP’s suppression of Christianity through confiscating bibles and Christian books at Banned.news.