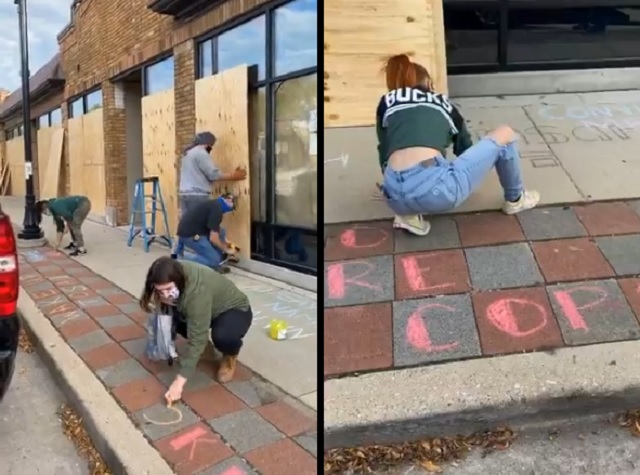 Small business owners in Wauwatosa, Wisconsin on Tuesday were filmed boarding up their businesses and scrawling Black Lives Matter propaganda on their sidewalks in anticipation of a potential charging decision involving a Black cop who shot a Black teenager who reportedly fired a gun at him.

Welcome to the new normal.

A small amount of Business owners in Wauwatosa board up as others write messages in chalk on the sidewalks in advance of a potential charging decision For Officer Joseph Mensah. @tmj4 pic.twitter.com/ZtcdUwp4Mf

Businesses in Wauwatosa are already boarding up ahead of tomorrow’s charging decision in the #Mensah case. Hear from the Mayor about how the city is preparing on @CBS58 pic.twitter.com/hBsjhxOJzq

It seems like business owners are getting creative and vandalizing around own property in the hope they’ll be spared by the mob.

The National Guard was pictured dispatched in the area.

Wisconsin National Guard arrives at State Fair Park. No word yet from officials why they might be there. pic.twitter.com/JL8pHWjBwi

Remember folks, this is all part of what the world’s richest man and oppressed minority Amazon CEO Jeff Bezos says is a “much-needed race reckoning.”