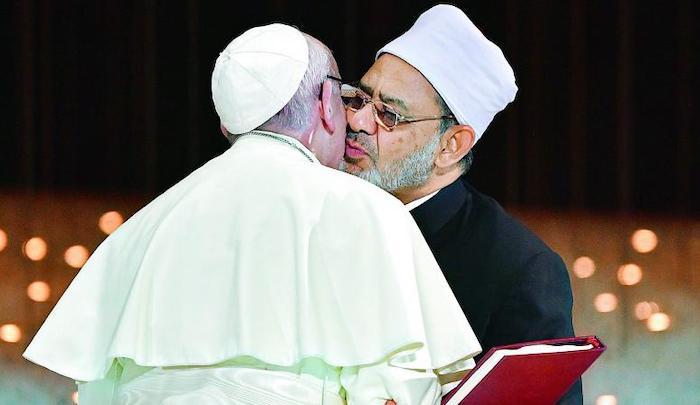 In his new encyclical Fratelli Tutti, the Woke Pope casts aside 2,000 years of unbroken tradition and declares: “Today we state clearly that ‘the death penalty is inadmissible’ and the Church is firmly committed to calling for its abolition worldwide.” That’s just great, but there’s one little catch. In the encyclical he cites and praises al-Azhar’s Grand Sheikh Ahmad al-Tayyeb, who has declared: “The four schools of law all concur that apostasy is a crime, that an apostate should be asked to repent, and that if he does not, he should be killed.” Apparently, Pope Francis now subscribes to the idea of the death penalty for thee, but not for me, all in the name of “dialogue.”

As you might expect with Pope Francis, it gets even worse. ChurchMilitant notes that in the new encyclical, al-Tayyeb is very much the star of the show; he is mentioned five times, including this: “I have felt particularly encouraged by the Grand Imam Ahmad Al-Tayyeb, with whom I met in Abu Dhabi, where we declared that ‘God has created all human beings equal in rights, duties and dignity, and has called them to live together as brothers and sisters.’”

Francis was referring to the Document on Human Fraternity for World Peace and Living Together that Francis and al-Tayyeb signed. Both that document and the new encyclical are as filled with falsehoods and wishful thinking as one would expect coming from a practiced deceiver such as al-Tayyeb and someone so eager to be deceived as the Pope.

What does al-Tayyeb really think about the equality and dignity of all human beings? In a 2016 interview, al-Tayyeb said that “We should be aware that the concepts of human rights are full of ticking time bombs.” In a 2019 interview, the grand imam elaborated: “Is equality an absolute principle or a limited principle? We can see that the Islamic notion of equality is limited. However, the Western notion of equality is, I’m very sad to say, absolute. It has destroyed – or has strived to destroy – many of the values that are more vital for the stability of people’s lives. If we examine the Western notion of equality… As a researcher I have the right to say that in my opinion this notion is false.”

For this reason, “terrorism is deplorable and threatens the security of people – be they in the East or the West, the North or the South – and disseminates panic, terror and pessimism, but this is not due to religion, even when terrorists instrumentalize it. It is due, rather, to an accumulation of incorrect interpretations of religious texts and to policies linked to hunger, poverty, injustice, oppression and pride. That is why it is so necessary to stop supporting terrorist movements fuelled by financing, the provision of weapons and strategy, and by attempts to justify these movements, even using the media. All these must be regarded as international crimes that threaten security and world peace. Such terrorism must be condemned in all its forms and expressions.”

Terrorism is due to “an accumulation of incorrect interpretations of religious texts”? Really? In his book War and Peace in the Law of Islam, which was published in 1955 and remains one of the most lucid and illuminating works on the subject, the scholar Majid Khadduri says that “the Islamic state, whose principal function was to put God’s law into practice, sought to establish Islam as the dominant reigning ideology over the entire world….The jihad was therefore employed as an instrument for both the universalization of religion and the establishment of an imperial world state.”

Imran Ahsan Khan Nyazee is an assistant professor on the faculty of Shari’ah and Law of the International Islamic University in Islamabad. In his 1994 book The Methodology of Ijtihad, he quotes the twelfth-century Maliki jurist Ibn Rushd: “Muslim jurists agreed that the purpose of fighting with the People of the Book…is one of two things: it is either their conversion to Islam or the payment of jizyah.” Nyazee concludes: “This leaves no doubt that the primary goal of the Muslim community, in the eyes of its jurists, is to spread the word of Allah through jihad, and the option of poll-tax [jizya] is to be exercised only after subjugation” of non-Muslims. How did someone with incorrect interpretations of religious texts become a professor on the Faculty of Shari’ah and Law at International Islamic University?

Meanwhile, Muslims continue to persecute Christians in many countries, and the encyclical mentions the word “persecution” only once, and in a general way.

This is what interfaith dialogue leads to, at least for the Christian side: total capitulation, the relativization of the faith, and the holding of contradictory ideas. The fruit of the dialogue between Muslims and Catholics has not been the protection of Christians in Muslim countries, but silence from the Catholic Church on this persecution. Bishops in the U.S. and Europe have now have been teaching for years that any discussion of such matters is “Islamophobic,” and will harm this wonderful dialogue that actually has no accomplishments to its name.

“Leave them; they are blind guides. And if a blind man leads a blind man, both will fall into a pit” (Matthew 15:14).