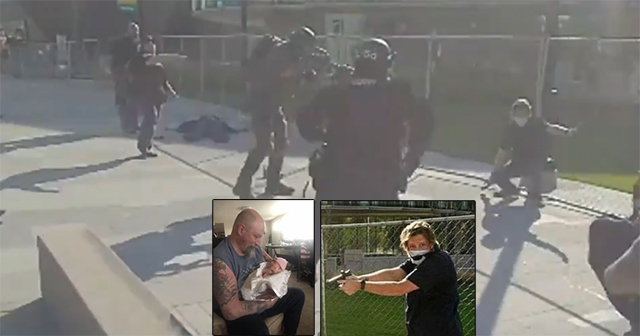 A hired gun for the station 9News shot and killed military veteran Lee Keltner at a “Patriot Rally” on Saturday afternoon in Denver.

The shooter, 30-year-old Matthew Robert Dolloff, is being held and investigated for first-degree murder but has not yet been charged, according to the Denver Police Department.

[UPDATE: City Of Denver: Accused Shooter Matthew Dolloff Is Not Licensed to Be A Security Guard]

UPDATE: Matthew Dolloff (DOB 03-07-1990) is being held for Investigation of First Degree Murder in connection w/the shooting that occurred yesterday at 10 W. 14th Ave. This remains an active investigation; any additional updates will be released as it becomes available. #Denver https://t.co/1Y7Yw7stL0 pic.twitter.com/Va3Lvc1CwT

A news photographer captured the shooting in a series of pictures (WARNING GRAPHIC):

Pictures put in order. There isn't a chance in hell this guy is able to walk via self defense unless his lawyer is dumber than internet autists. Also shows that I was correct as to who was in the blue shirt, the producer who was arrested. @SomeBitchIKnow @ThunderB pic.twitter.com/n1ZvBpLbUf

In the third photo, you can actually see the shell casing being ejected.

This photo shows the shell casing being ejected. pic.twitter.com/iw6HQL5rks

The shooting was barely captured on video at a distance:

The moment someone opened fire on another person in Denver. pic.twitter.com/lvC3KAYKjE

A left-wing agitator was screaming the N-word at Keltner and others right before the shooting, which is partially captured at the end of this video (GRAPHIC):

Here is a video of what lead up to the Denver shooting:pic.twitter.com/1IEZdFNE5v

Dolloff appears to have reached for Keltner’s pepperspray and then pulled his gun and shot Keltner in the face after Keltner tried to back away and defend himself with pepperspray.

Leftists were heard celebrating the attack in the immediate aftermath.

Dolloff’s social media accounts show he’s a big leftist himself and was a Bernie Sanders supporter.

Read the rest at Information Liberation…