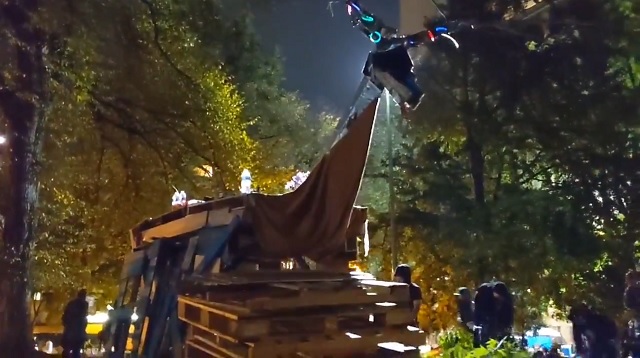 Leftists in Portland tore down statues of Abraham Lincoln and Teddy Roosevelt on Sunday night and put up one of their own the next day.

The statue, which they’re calling the second “Nightmare Elk,” is a giant pile of trash.

After tearing down century-old bronze statues of Lincoln & Roosevelt, antifa built their own statue in downtown Portland. They say it is an elk. The previous bronze elk statue was set on fire & severely damaged by antifa during the summer rioting. pic.twitter.com/9rie7j48dQ

“Property can be rebuilt,” they say.

As Andy Ngo noted, Roland Hinton Perry’s Elk statue from 1900 was taken down earlier this year after leftists set it on fire. The first “Nightmare Elk” leftists replaced it with was similarly horrible.

Patriot Prayer members, who are well known for their public service, helped their local community by removing the pile of trash last Thursday night or Friday morning.

Insurance will cover it pic.twitter.com/dvwC3wqJgx