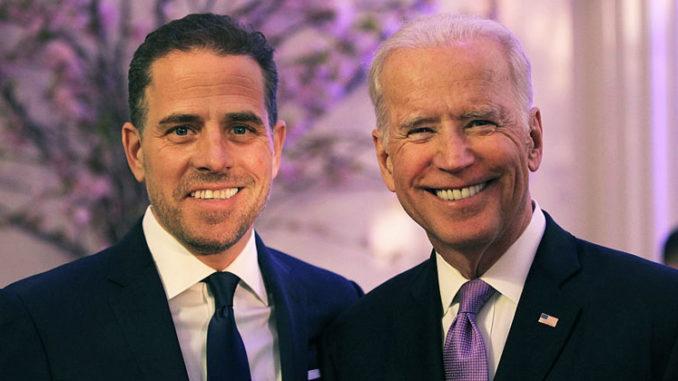 This probably comes as no surprise given former Vice President Joe Biden’s “hands on” approach to children and women.  Still, while it is yet unknown why a FBI special agent, whose specific crime investigations are on child pornography, was brought in on the case surrounding a laptop that allegedly belonged to Hunter Biden, the case has definitely taken a strange twist.

According to The New York Post with regard to the computer:

The computer was dropped off at a repair shop in Biden’s home state of Delaware in April 2019, according to the store’s owner.

Other material extracted from the computer includes a raunchy, 12-minute video that appears to show Hunter, who’s admitted struggling with addiction problems, smoking crack while engaged in a sex act with an unidentified woman, as well as numerous other sexually explicit images.

The customer who brought in the water-damaged MacBook Pro for repair never paid for the service or retrieved it or a hard drive on which its contents were stored, according to the shop owner, who said he tried repeatedly to contact the client.

The shop owner couldn’t positively identify the customer as Hunter Biden, but said the laptop bore a sticker from the Beau Biden Foundation, named after Hunter’s late brother and former Delaware attorney general.

Photos of a Delaware federal subpoena given to The Post show that both the computer and hard drive were seized by the FBI in December, after the shop’s owner says he alerted the feds to their existence.

But before turning over the gear, the shop owner says, he made a copy of the hard drive and later gave it to former Mayor Rudy Giuliani’s lawyer, Robert Costello.

Steve Bannon, former adviser to President Trump, told The Post about the existence of the hard drive in late September and Giuliani provided The Post with a copy of it on Sunday.

The Gateway Pundit follows up regarding the subpoena of the laptop by the FBI.

One image included in the New York Post photos was the FBI’s subpoena for the laptop.

In 2012, Wilson was described by The Star-Ledger, a New Jersey-based newspaper, as “an FBI agent based in New Jersey who has spent nearly five years working full time on child pornography.

A child pornography criminal complaint from 2012 includes Wilson’s signature — seemingly an exact match to what was found on the December subpoena.

Both Western Journal and the left-leaning Business Insider confirm that the Special Agent’s signature belongs to the same Joshua Wilson.

It’s unclear whether the FBI employs more than one agent named Joshua Wilson. But the available evidence seems to show **the Joshua Wilson who signed the subpoena for Hunter Biden’s laptop, and the Joshua Wilson who investigates child pornography for the FBI, are the same person**. This raises the possibility, not explored by the Post, that the FBI issued the subpoena for reasons unrelated to Hunter Biden’s role in Ukraine and Burisma.

Suppose the FBI’s child pornography and exploitation division is investigating the laptop. In that case, we begin to see possible answers to the two burning questions: Why did Hunter Biden agree to share his income with his wealthy father, and why has the FBI failed to act on the laptop’s contents.

Was Joe Biden Blackmailing His Own Son?

We know that Hunter Biden exploited his father’s position as Vice President to win ridiculously lucrative jobs with the Ukrainian energy company Burisma, several Chinese companies and officials, and a $3.5 million gift from the wife of Moscow’s mayor.

We have learned from the New York Post story that Hunter seems to have arranged a meeting between a Burisma executive and Joe Biden in 2015.

We know that Joe Biden got a Ukrainian prosecutor fired in exchange for a $1 billion gift to the Ukrainian government.

We just learned that Joe Biden demanded at least half of his son’s vast income and that Hunter Biden complied with his father’s demands.

We also know that Hunter Biden has lived a troubled life. The Navy kicked him out for drug abuse. He fathered a child he denies and refuses to support. Photos, both in the press and on the hard drive, reveal a playboy’s lifestyle of travel, drinking, drugs, and women. And constant financial problems despite millions of dollars in income.

Considering the numerous photos of Hunter and Joe together, it is reasonable to assume Joe knows about Hunter’s lifestyle. In other words, Joe Biden knows what’s in Hunter’s closet. And the potential consequences to Hunter’s reputation and freedom.

All of this information leads to one final question. A question that answers the two burning questions: **Did Joe Biden blackmail his son?**

Did Joe Biden exploit Hunter’s recklessness by pimping him out as a bagman to foreign capitals?

Did Joe Biden use his influence and power to hamstring FBI investigations of Hunter?

Therefore, did Hunter Biden feel he had no choice but to turn over half the loot to his “Pops?”

There’s More To The News Than COVID-19: The Biden Sexual Assault Allegation

Joe Biden: “Second Amendment Exists” But You’re Not “Entitled” To A Gun

Joe Biden Dropped Out Of The ’88 Presidential Election For Embellishing His Academic Record – Why Doesn’t Lee County Sheriff Carmine Marceno Drop Out Of His Campaign?

More Joe Biden Stories Are Coming Out: “Anybody Who’s Ever Been Around Joe Biden Has Been Touched By Him – Literally”

Well, did he?  Biden is a pretty creepy man and he certainly isn’t about upholding the law.