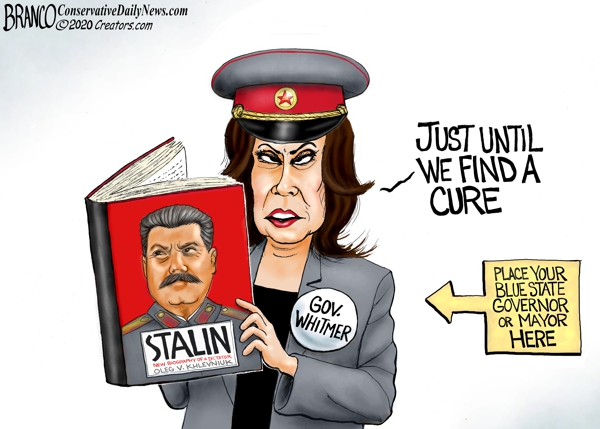 (Natural News) The alleged kidnapping plot against Michigan Gov. Gretchen Whitmer that was widely reported by the mainstream media turned out to be a false flag operation hatched by none other than the deeply corrupt FBI.

While there was, in fact, a handful of citizens that wanted to do something to stop Whitmer from continuing to trample the civil rights of Michiganders, it was an FBI informant who was paid $8,600 that actually ensnared them into the phony kidnapping scheme, creating fake news headlines that the left-wing media used to smear Trump supporters.

According to defense attorney Scott Graham, there was never any real kidnapping plot beyond the one imagined and conjured up by the FBI. Instead, there were a few guys talking online about how to hold Whitmer accountable who were deceived by the FBI into thinking its informant wanted to help them.

This informant spun the contrived narrative that the mainstream media ran with to try to smear the right-wing as a bunch of unhinged domestic terrorists who resort to violence whenever they do not get what they want – you know, kind of like what Black Lives Matter (BLM) and Antifa do.

“Have you ever dealt with big talkers?” Graham asked, suggesting that the alleged kidnappers are little more than “military wannabes” who were “never going to do anything.”

“There’s kind of a military wannabe theme that runs between the militias,” he added.

Militiamen may have planned a citizen’s arrest of Whitmer, which is perfectly legal and justified

Attorney Gary Springstead, who is representing one of the individuals falsely accused of trying to kidnap Whitmer, further stated that there is a whole lot more evidence yet to be seen that the FBI, in its quest to demonize the right, is obfuscating.

“I haven’t had a full opportunity to review all of the evidence,” Springstead is quoted as saying. “I think my co-counsel made good points that (the evidence presented today) is a snapshot. A lot of quick points in a big time frame. You don’t know what else is happening outside of that time frame.”

Springstead added that he does not plan to rely on the federal government to tell the full story about what happened and that it will take some time to fill in the gaps of what was not captured on tape that the FBI is conveniently leaving out of its alleged evidence.

There is also the very real possibility that the alleged kidnappers were actually planning to perform a citizen’s arrest of Whitmer, which is a completely legal process.

Barry County Sheriff Dar Leaf, who knows several of the alleged kidnappers, says a citizen’s arrest of Whitmer is fully justified considering the barrage of intolerable acts she has inflicted upon her constituents over the past seven months.

“It’s just a charge,” Leaf stated about the case, noting that the alleged kidnappers should not be convicted by the news media, but rather have a right to a fair trial.

Leaf further added that Michigan citizens have a right to perform a citizen’s arrest in the event that a felony has been committed.

“And it doesn’t say if you’re in elected office that you’re exempt from that arrest,” he stated. “So, I have to look at it from that angle, and I’m hoping that’s more of what it is. As a matter of fact, these guys are innocent until proven guilty so I’m not even sure if they had any part of it.”

The federal government is notorious for staging false flag operations like this to push a nefarious agenda – learn more at FalseFlag.news.