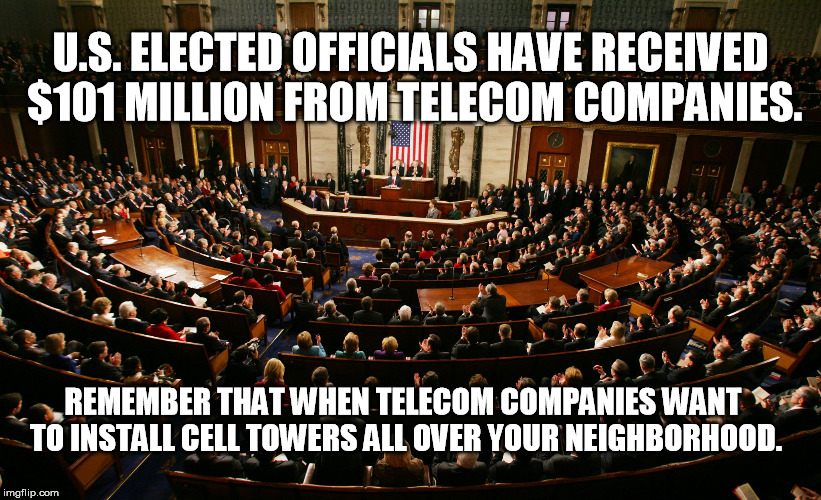 Last year Activist Post reported extensively about Sacramento children who became sick after Verizon installed a 5G tower next to their family’s home. Their uncle, Noah Davidson, has been fighting tirelessly ever since so others don’t suffer the same fate.

Speaking Out on Electrosensitivity as 5G Expands

SACRAMENTO, Calif. — As the march to install superfast 5G wireless service continues across the country, advocates for patients with electro-sensitivity are questioning the technology’s safety.

Noah Davidson of Sacramento began lobbying to have 5G antennas moved away from people’s homes and offices because his five- and seven-year-old nieces got sick for two months straight, right after Verizon installed a 5G box on a light pole next to their home.

The family hired an expert to measure the radio-frequency levels.

“He conducted some measurements and told us it was the highest indoor measurements that he’d ever recorded,” Davidson claimed. “So, we ended up installing some shielding in the home, moving the kids into a back room. And within a few days, their symptoms went away.”

Cell antennas for 3G and 4G signals are typically mounted on towers 50 to 200 feet above ground. But the 5G small cell boxes are more localized, generally placed every seven or eight houses, about 30 feet off the ground.

Dr. David Carpenter, director of the Institute for Health and the Environment at the University of Albany and an expert on RF radiation, said some people do fall ill when exposed to non-ionizing radiation from cell phones, smart meters, and components of the 5G cell sites, boxes that are now being installed across the nation.

“There are a lot of people that get ringing in their ears or get headaches, and feel fatigued and their brain isn’t working quite right, that never think about the fact that it may be coming from the Wi-Fi in their house, or the smart meter on the outside door,” Carpenter explained.

It looked at the case of 47-year-old Rick Garwood, a former cell phone tower technician from Southern California. He was exposed to massive radiation amounts in 2011, when a Verizon worker switched the towers back on after they’d been shut down for maintenance.

Declare Your Independence!
Profit outside the rigged system! Protect yourself from tyranny and economic collapse. Learn to live free and spread pea

Garwood said he’s now on permanent disability, suffering with nodules on his lungs and painful lesions on his brain, kidney and spinal cord.

“The person I was, is gone,” Garwood said. “I mean, I’ve lost everything in life. I had to move back to my parent’s home. I’m on permanent disability; I went from an $80,000-a-year career to all of a sudden, I was on worker’s comp for four-and-a-half years. And then they finally said, ‘You’re not going to get any better.’”

Garwood sued, went to mediation, and received about a year’s pay.

The Federal Communications Commission (FCC) is not a health or environmental agency. They replaced the EPA as the regulatory body assigned to protect Americans from the telecom industry. Unfortunately, they have catered to the telecom industry for decades and have become more dangerous since Trump was elected. Despite research proving harm, they refuse to update 24-year-old federal RF radiation exposure guidelines. Lawsuits have been filed against the agency for NOT protecting the public from unsafe levels of radiation as well as 5G deployment on land (see 1, 2. 3. 4, 5, 6) and in space (see 1, 2)

There ARE studies that have already determined 5G is NOT safe. Cities AND entire countries have taken action to ban, delay, halt, and limit installation AS WELL AS issue moratoriums on deployment. The majority of scientists worldwide oppose 5G until there are studies proving it isn’t unsafe. Doctors and scientists have also asked for a worldwide moratorium on deployment on Earth and in space (see 1, 2). However, health risks aren’t isolated to 5G exposure. Last year the World Health Organization warned that high levels of Electromagnetic Fields (aka “Electrosmog”) could cause health issues in a significant percentage of the population.

There are credible doctors and scientists – including the American Academy of Pediatrics – who already insist that exposure to all sources of wireless radiation, including 5G, is harmful (see also 1, 2). The FCC still only seems interested in what industry-paid consultants have to say.

Activist Post reports regularly about 5G and other unsafe technology. For more information visit our archives and the following websites.