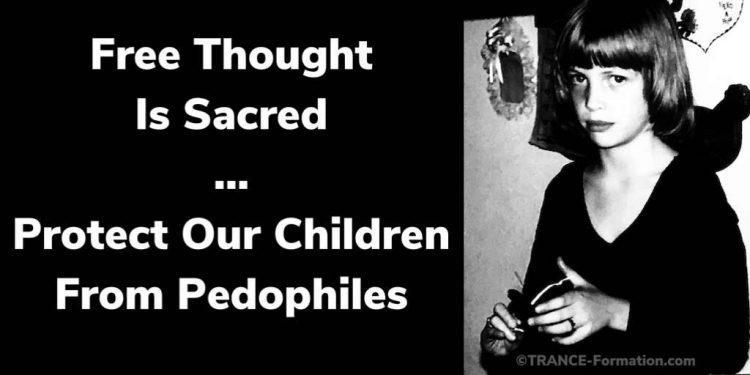 Last year, I was encouraged to read a book:  Trance Formation of America.  The book was authored by a former “spook,” Mark Phillips and the woman he rescued from MKUltra mind control, Cathy O’Brien, a victim of MKUltra and child sex trafficking at the highest levels of the government.  It’s a fascinating story, and what really got me was the use of the Bible to trip the mind control in this woman and her daughter, to the point that her husband had been prostituting her.  The book recounts the cost to Phillips to save this woman from the prison of her own mind that the spell of mind control had exercised over her and her daughter.  Now, she’s calling on Americans to stand up and protect children from the pedophile agenda.

No, this is not a “conspiracy theory,” but there is a clear conspiracy when it comes to pedophilia in America and those in authority being involved, perpetuating and even covering for those engaged in it.

With that said, Ms. O’Brien has written a recent article calling for justice and protection of our children against the growing pedophile agenda.

Pedophiles thrive on the adrenaline of tortured children, while we are being socially engineered to accept their idea that “children want to be raped”.

This inhumane concept is deliberately promoted in our school system and [mainstream] media while justice is usurped by complicit judges reducing sentences for pedophilic crimes against humanity.

I gained much insight into the pedophile agenda while forced into the swamp with perpeTraitors under their MK Ultra mind control.

Abuse prior to age 5 while the brain is still forming is considered the prime basis for mind control, which is a major component of their New World Order agenda.

In turn, mind control is consistent with human trafficking, which is their primary funding mechanism for implementing what Adolph Hitler first termed New World Order.

Ultimate Proof: Covid-19 Was Planned To Usher In The New World Order

It is up to you to arm yourself with knowledge against the pedophile agenda rather than simply dismiss it as “conspiracy” as perpeTraitors suggest.

When deep swamp-roots of corruption are strategically planted for generations, we must think beyond semantics and social engineering to do our part to #SaveTheChildren and #DrainTheSwamp.

Knowledge is our defense against mind control, which is why truth is censored by media that is totally controlled to perpetuate this horrific New World Order agenda. Research for yourself.

Dig deep for facts that are buried under illusions while our children continue to disappear at alarming rates to feed pedophilic adrenaline junkies.

My owner in MK Ultra torturous mind control was US Senator Robert C. Byrd [Hillary Clinton’s mentors], who planted his corrupt roots deep in US politics for over 50 years.

He even had an office in the FBI building to utilize the agency as a catch net operation for human trafficking “runaway slaves”.

Byrd would assure his cohorts in pedophilia, mind control, and human trafficking, “Good people do not think to look for this kind of criminal activity.”

This criminal activity has been hiding in plain sight ever since Project Paperclip imported Nazi scientists into the US in the wake of WWII.

By the time George Bush, Sr. took office as President, he brazenly told u.s. he was implementing what Hitler and he termed the New World Order.

Pedophilia: A Basis For Mind Control

Hitler/Himmler research had proved that pedophilia, especially incest based, produced the prime candidate for mind control due to the way our brains respond to incomprehensible trauma.

Therefore, suggestibility heightens as the conscious mind takes flight from the trauma.

In scientific terms, the brain autogenically shuts down neuron pathways surrounding trauma to compartmentalize memory of the event so the rest of the mind can function normally as though nothing has happened.

This brain response is professionally defined as “the mind’s sane defense to trauma too horrible to comprehend.”

Regardless of what you have been conditioned to believe about pedophilia, our innate design says it is wrong and responds accordingly.

This autogenic brain response peaks prior to age 5 – before there is even an ability to adjudge pedophilia is wrong – resulting in dissociative identity disorders that can last a lifetime.

What we Need-to-Know is that dissociative identity disorders are the primary basis of mind control for strategically ushering in the New World Order. Think Hitler’s youth.

Compound the reality of their robotic compliance with multi-generations of advanced application and technology, and you begin to see what is happening today to our sovereignty as a nation and as individuals.

Pedophilia must be understood in its entirety. It is not a “sexual preference” as we are being conditioned to believe. Pedophilia is violent assault of children that alters brain formation.

When brains compartmentalize sexual abuse prior to age 5, that part of the brain sectioned off by neuron pathways shutting down contains memory of that sexual abuse.

When the abuse occurs again, those neuron pathways re-open again and again as needed.

In later years, if the issue has not been consciously addressed that same brain compartment is vulnerable to being triggered open like a switch. Deviant sexual behavior including pedophilia could occur.

Often times pedophilia perpetuates itself, which is why multi-generational incest is targeted for mind control.

It is imperative that childhood sexual abuse issues be consciously addressed in order to break the cycle.

Information on pedophilia, mind control, and healing from it has been deliberately omitted from mental health training. Secret knowledge equals power whereby censoring scientific information on mind brain function for control is so intolerable that Intel insider Mark Phillips and I released it in PTSD: Time to Heal

Today our kids are being conditioned through global ed/common core to believe that their “gender confusion” is something they were born with, further diverting them from consciously remembering abuse/abusers and reclaiming self control.

My pedophile father received immunity from prosecution for manufacturing child pornography of me by selling me in CIA MK Ultra mind control. In the early 1960’s, our justice system was already being corrupted to perpetuate pedophilia!

Cathy O’Brien On The Real Reason For Masks: ‘My Daughter Was Made To Wear A Mask From The Age Of Two As Part Of Her CIA MKUltra Mind Control’

Then local politician Gerald Ford was responsible for thrusting me into MK Ultra, where my victimization rose proportionately to his political career.

I became a “Presidential model” used in black ops on White House/ Pentagon levels as detailed in TRANCE Formation of America.

Since extreme trauma creates compartmentalized memory used for MK Ultra mind control programming, I was subjected to tortures and horrors no one should ever endure – the worst of which was their pedophilic torturous assault of my child.

My mind control was absolute and robotic whereby I could not think to save her or myself.

I witnessed/ experienced a criminal faction of our government implementing their New World Order through a silent coup that is finally being exposed today.

Crimes against humanity perpetrated by Bush, Byrd, Clintons, and more strategically traumatized our nation into compliance and complacency.

Video evidence of horrific sexual acts was kept in vaults back when I was under mind control, much the way Epstein video and laptop files are kept today for blackmail purposes. PerpeTraitors have no cause to trust each other without blackmail.

Obviously, they know pedophilia and human harvesting/ trafficking is wrong, yet their addiction to adrenaline of our tortured and traumatized children unites them in perpetuating their New World Order slave society agenda at all costs.

Think what lies beyond perpeTraitors’ public justifications for pedophilia. Pedophilia is not our “new normal” – there is nothing “normal” about it as evidenced by our brain’s autogenic defense against it.

Research for yourself the effects of trauma on the human mind and how pedophilia alters brain function in children.

Our children and future generations depend on our informed actions today to effectively stop this pervasive pedophile agenda. Free thought is sacred! Protect our children!

Indeed!  While President Donald Trump’s administration has gone after many pedophile rings in the States, the bigger fish that Ms. O’Brien mentioned above remain at large, continuing their wicked practices against America and her children.  It’s time the politics stopped and the justice began, unless, that is, the current administration is controlled opposition just as I’ve said they are.