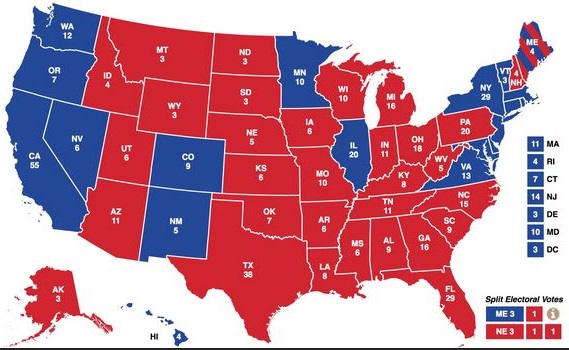 Google is a behemoth, controlling as much as 92% of internet web searches worldwide.

Finally, on October 20, 2020, the U.S. Department of Justice (DOJ) and 11 states filed a lawsuit against Google for violating anti-trust laws — the U.S. government’s biggest antitrust case in two decades.

It is noteworthy that all 11 states are red states in the 2016 presidential election: Arkansas, Florida, Georgia, Indiana, Kentucky, Louisiana, Mississippi, Missouri, Montana, South Carolina, and Texas. The other states must not care about Google being a monopoly that stifles and impedes competition.

As one of the wealthiest companies on the planet with a market value of $1 trillion, Google is the monopoly gatekeeper to the internet for billions of users and countless advertisers worldwide. For years, Google has accounted for almost 90 percent of all search queries in the United States and has used anticompetitive tactics to maintain and extend its monopolies in search and search advertising.

As alleged in the Complaint, Google has entered into a series of exclusionary agreements that collectively lock up the primary avenues through which users access search engines, and thus the internet, by requiring that Google be set as the preset default general search engine on billions of mobile devices and computers worldwide and, in many cases, prohibiting preinstallation of a competitor….

The Complaint alleges that Google’s anticompetitive practices have had harmful effects on competition and consumers. Google has foreclosed any meaningful search competitor from gaining vital distribution and scale, eliminating competition for a majority of search queries in the United States. By restricting competition in search, Google’s conduct has harmed consumers by reducing the quality of search (including on dimensions such as privacy, data protection, and use of consumer data), lessening choice in search, and impeding innovation. By suppressing competition in advertising, Google has the power to charge advertisers more than it could in a competitive market and to reduce the quality of the services it provides them. Through filing the lawsuit, the Department seeks to stop Google’s anticompetitive conduct and restore competition for American consumers, advertisers, and all companies now reliant on the internet economy.

In particular, the DOJ’s antitrust lawsuit targets a secret deal between Google and Apple, worth billions of dollars to both companies, by making Google the primary search engine on Apple’s devices.

According to the New York Times, the secret pact was first inked 15 years ago and has rarely been discussed by either company. 3½ years ago, Google and Apple renegotiated and renewed the secret deal, symbolized by the chief executives of the two companies, Google’s Sundar Pichai and Apple’s Tim Cook, having dinner together at an upscale Vietnamese restaurant, Tamarine, in Silicon Valley in Palo Alto, CA.

Nearly half of Google’s search traffic now comes from Apple devices, according to the Justice Department….

Apple now receives an estimated $8 billion to $12 billion in annual payments — up from $1 billion a year in 2014 — in exchange for building Google’s search engine into its products. It is probably the single biggest payment that Google makes to anyone and accounts for 14 to 21 percent of Apple’s annual profits….

[A] senior Apple employee wrote to a Google counterpart that “our vision is that we work as if we are one company,” according to the Justice Department’s complaint.

A forced breakup could mean the loss of easy money to Apple. But it would be a more significant threat to Google, which would have no obvious way to replace the lost traffic….

The deal is not limited to searches in Apple’s Safari browser; it extends to virtually all searches done on Apple devices, including with Apple’s virtual assistant, Siri, and on Google’s iPhone app and Chrome browser.

If the deal between Google and Apple were legitimate, there would be no need for secrecy.