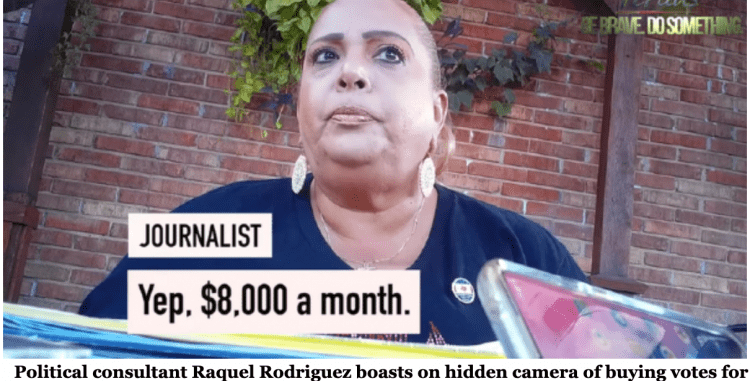 We need action. The Democrats are destroying this country on every front. And the Right doesn’t have testicular fortitude to do what must be done.

That’s exactly what I’m getting paid to do’

A political consultant in Texas boasts in a new Project Veritas hidden-camera report that she’s been paid a total of $55,000 to flip 5,000 votes for Joe Biden and the Democratic candidate for the U.S. Senate in her state, MJ Hegar.

Raquel Rodriguez also was featured in a report Tuesday that caught her on a hidden camera coercing and bribing voters to vote Democrat, violating Texas and federal law.

She’s a consultant for Republican House candidate Mauro Garza in Bexar County, Texas, but she admitted that “some of my Republicans are precinct chairs” secretly “want to help Biden.”

She said she’s paid to flip votes for Biden at a cost of “five to eight dollars per vote.

“Yeah, that’s what I’m doing. That’s exactly what I’m getting paid to do,” she said.

Rodriguez said she would not work for President Trump.

“Yeah, I’m getting the Biden vote out, but I mean I’m not going to do it for free — in other words if they don’t pay me, I’m like excuse me?” she said.

“I’m against Trump. OK. I’m with Biden and I’m with Hegar. That’s the truth,” she said. “I’ve got three Democrats, three Republicans and the rest are Democrats.”

Rodriguez said she was also hired to help judicial candidates.

After the report Tuesday, Garza issued a statement condemning Rodriquez’s action and announcing she is no longer working for the campaign.