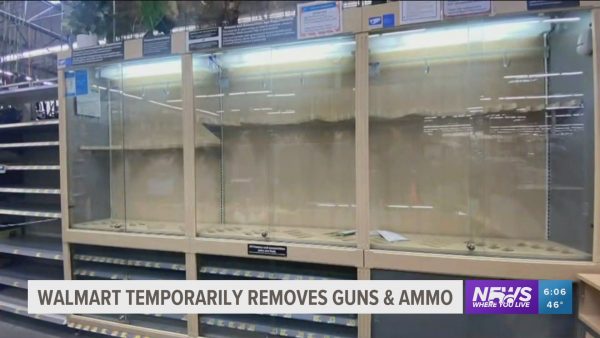 Keeping saying it. Don’t stop, or else you’ll be added to the naughty list: Diversity is our greatest strength.

Walmart on Thursday said it has pulled guns and ammunition from the sales floors of its U.S. stores as it seeks to keep firearms from being stolen should social unrest erupt.

“We have seen some isolated civil unrest, and as we have done on several occasions over the last few years, we have moved our firearms and ammunition off the sales floor as a precaution for the safety of our associates and customers,” a Walmart spokesperson said in an email to CBS MoneyWatch. “These items do remain available for purchase by customers.”

The company in June removed firearms and ammunition from stores after George Floyd’s killing by police when several of its stores were damaged.

The nation’s biggest retailer remains a major seller of guns and ammunition, although it has scaled back, selling firearms in roughly half of its 4,700 U.S. stores.

Walmart stopped selling ammunition that can be used in semiautomatic rifles and handguns after a 2019 shooting at one of its stores in El Paso, Texas, killed 23 people. The company stopped selling assault-style weapons in 2015 and raised the minimum age to buy firearms and ammunition to 21, from 18, in 2018. It stopped selling handguns everywhere but in Alaska in 1993, and ended its sales of rifles like the AR-15 in 2015.

Consumer demand for firearms has jumped this year. The National Shooting Sports Foundation, an industry trade group, estimates there were a record 12.1 million background checks for gun purchases from January through July, up nearly 72% from 7.1 million gun checks in the year-ago period.

Forty percent of firearms sales involves purchasers who’d never owned a gun, according to a NSSF survey of firearm retailers. It concludes that almost 5 million Americans bought a gun for the first time in 2020.

We must all become Winston Smith, and just admit the truth behind the statement and state unequivocally, “Diversity is our greatest strength.” We must win the victory over ourselves, right? Will just two gin-scented tears trickling down the sides of our noses suffice?

But note firearms sales have set a new record this year, all during a time period where Walmart has decided to pulls guns and ammo from every store across America.

Nevertheless, “Diversity is our greatest strength.”