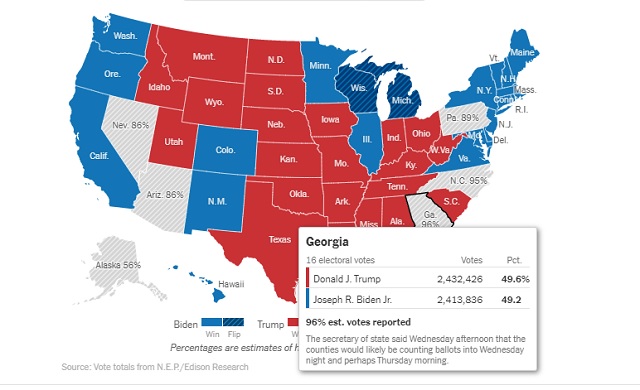 Early Thursday morning, it was looking like President Trump was going to narrowly secure a win in Georgia with under 25,000 uncounted ballots remaining but then between 6:00AM and 8:30AM the number of uncounted ballots was shifted to 50,000-60,000.

UPDATE: The Secretary of State's Office says there are actually 50,000-60,000 uncounted ballots remaining as of 8:30 a.m., more than initially thought early this morning: https://t.co/27Al5xzlvc

they were supposed to be done counting last night.

As of 6 am this morning they said there was 25,000 left and they should be done counting by noon. Two hours later it turned out several counties had misreported the number of absentees left by 25,000 to 35,000.

Here is the audio from the Secretary of State this morning on @wsbradio. pic.twitter.com/mHdAbMm42s

The ballots are allegedly from mostly Democratic areas and could be just enough to make Trump lose.

So, AJC is saying 51,000 untallied absentee ballots in Georgia, most "concentrated in highly populated areas, led by Fulton County in Atlanta and Chatham County in Savannah." Biden needs 18,500 to catch up, meaning he'd need to win them 68-32. Very doable. https://t.co/rhBCJDsKrc

The only thing we did on Election Day was tell them how many votes they needed on Election Night. pic.twitter.com/lOG2iV4l2e