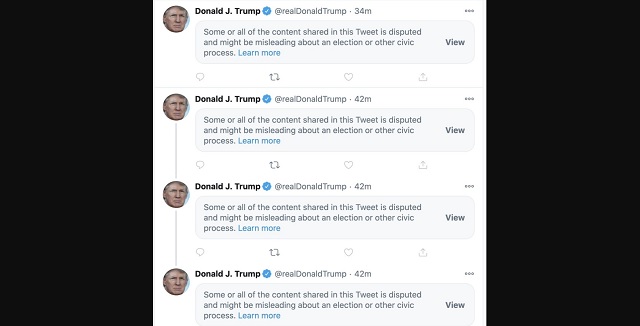 Twitter on Saturday censored all of President Trump’s tweets speaking out against Democrats’ blocking GOP poll watchers and warning that “illegal” and “bad things” took place behind the scenes.

The tweets were blocked from being liked and retweeted and had giant warning labels slapped on them.

….This would ALSO change the Election result in numerous States, including Pennsylvania, which everyone thought was easily won on Election Night, only to see a massive lead disappear, without anyone being allowed to OBSERVE, for long intervals of time, what the happened…

….Bad things took place during those hours where LEGAL TRANSPARENCY was viciously & crudely not allowed. Tractors blocked doors & windows were covered with thick cardboard so that observers could not see into the count rooms. BAD THINGS HAPPENED INSIDE. BIG CHANGES TOOK PLACE!

They’ve been doing this with nearly all of President Trump’s tweets since Election Day and announced they’re going to ban him come January if they so please.

NEW: If President Trump loses the election, he'll no longer be considered a "world leader" when he commits rule violations on Twitter

That means instead of hiding his tweets behind labels, Twitter could demand he delete them, suspend him or even ban himhttps://t.co/8KV3Gl1rjZ

Trump announced he’s holding a press conference at 11:30 AM EST:

He also highlighted how thousands of votes were “swapped” away from Trump to Biden as a result of an alleged “glitch” from Dominion Voting Systems’ e-voting machines.

Georgia Counties Using Same Software as Michigan Counties Also Encounter ‘Glitch’ https://t.co/N2KlEOezGi via @BreitbartNews What a total mess this “election” has been!

Michigan GOP Chair: Dozens of Michigan counties used the same software that caused 6,000 votes in one county to switch from Trump to Biden.

"These counties that used this software need to closely examine their result for similar discrepancies." pic.twitter.com/ZK3uUcogNB

Trump earlier this week said he is not planning on conceding and the American people “deserve to have full transparency into all vote counting and election certification” and he will “never give up fighting for your and our nation.”

"I will never give up fighting for you and our nation" pic.twitter.com/VCg0Za0m83

I WON THIS ELECTION, BY A LOT!” Trump tweeted Saturday.

I WON THIS ELECTION, BY A LOT!

Trump supporters are organizing “Stop The Steal” protests scheduled for 12:00PM throughout the country.

Arizona Rep. Paul Gosar called on patriots to join them and bring American flags, Trump flags and Bibles but DO NOT open carry.

Tomorrow. State Capitol. Patriots please join us. Bring flags. And again. No open carry. The leftist media will say “armed protestors” scaring the media. I know it’s legal. But it’s not necessary at this time. https://t.co/FGxYrXNnJn

Trump’s allies have been demanding not only that there be recounts throughout the country but vote audits to investigate potential fraud.

"A full audit is absolutely necessary. We should get injunctions if necessary. And if I have to do it, I'll fight on the floor of the House of Representatives to stop the Electoral College from being certified." pic.twitter.com/D6SQChnTAQ

2. No election results should be certified until a complete audit of the Dominion machine tallies is made.