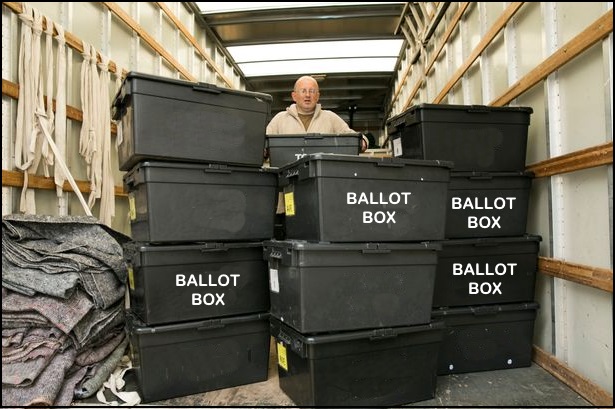 (Natural News) In the late hours of the November 3rd Presidential election, Donald Trump enjoyed large percentage leads in democrat-controlled states like Pennsylvania, Georgia, Michigan and Wisconsin. If the voting trend were to continue as projected, Donald Trump would have won the states handily; however, on the early morning of November 4th, the percentage of votes coming in for Joe Biden drastically changed, skyrocketing in frequency. The sudden change in the final voting trends in these states prompted suspicion that the election was being stolen through non-transparent processes, reporting errors, mail-in ballot fraud, manipulation of the data and computer program ‘glitches.’ Why were the sudden shifts in voting trend not reported in other states? Analyses of election data show statistically odd phenomena in the vote tallies for Joe Biden across these democrat-controlled states in the after-hours of the election.

Using statistical analysis, data experts report that Biden’s vote counts violate Benford’s law, a mathematical formula that investigates real world data sets to identify statistical anomalies. The law uses a logarithmic scale to weed out anomalies in first digit distribution to find patterns and locate data that diverges from the norm. If an anomaly is identified, it could be evidence that the data was artificially manipulated. Benford’s law has been applied to financial records to scan for illegal activities. It was used in the 2009 Iran election to monitor for ballot stuffing fraud and was put to use in the 2016 Presidential election in Wisconsin. In 2020, Benford’s law has already identified statistical anomalies that benefit Joe Biden’s vote total in Wisconsin, Pennsylvania and Illinois.

In Milwaukee, for example, many city wards started going to Biden at a much larger margin than counted before. The anomaly was identified for vote counts after 3 a.m. on November 4. Sometimes the anomaly peaked at 40 percentage points for Biden. Anomalies were also identified in Fulton County Georgia. It turns out that 132,000 “change of address” red flags were discovered in that county. Most of these votes were illegally cast by ineligible voters who had moved out of the state. Could there have been a coordinated effort to intercept and forge mail-in ballot requests of people who had already moved out of the state?

Too much fraud, not enough time, and Democrats hold all the leverage

Another statistical anomaly was observed in Michigan. At 5 a.m. on November 4, Decision Desk HQ added 138,339 votes to Biden, and none to Trump. Decision Desk HQ updated the totals forty minutes later, subtracting 110,796 votes from Biden and adding 16,638 to Trump because of a reported “clerical error” in Shiawassee County. The county admittedly distributed incorrect data. How many “clerical errors” benefited Joe Biden on a smaller, more unrecognizable scale? How many “clerical errors” were not admitted at all?

By 6:18 a.m., Biden’s total jumped up again by 158,902 votes, while Trump’s total only received 29,295. The votes were breaking for Biden at an exceptionally high ratio in the final counties (a staggering, unprecedented 85 percent vote split for Biden). Over 30,000 of the votes Biden received came from counties that were less favorable to him, adding further suspicion that the exceptionally high ratio turning to Biden in the final vote counts were fraudulent.

Trump is challenging the results in court, but Democrats hold all the leverage. Never before have so many legal challenges been needed to understand the true vote total in a Presidential election. If the vote totals are not certified and sent to the electors by January, Democrats will take charge anyway, with Speaker of the House Nancy Pelosi becoming the 46th President. President Trump may be forced to concede the election to either Pelosi or Biden if Democrats do not cooperate with the fraud investigations in a timely and transparent manner.