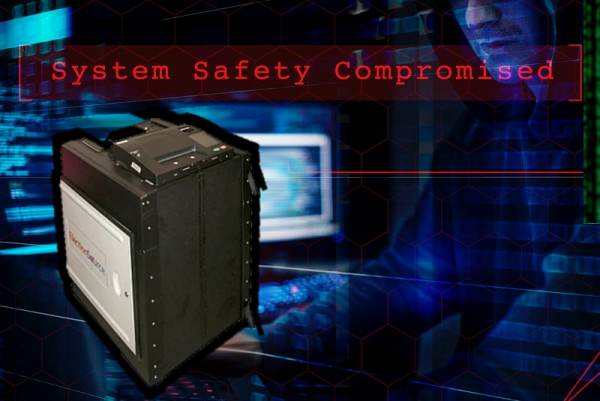 There’s no doubt in my mind that there has been rampant voter fraud despite the lying, CIA-controlled media’s narrative.  On top of that, we already know from court testimony by a software programmer that electronic voting machines can be manipulated without anyone knowing it to flip an election.  Now, in one of the lawsuits filed by the Trump campaign, we have an observer claiming to have witnessed delivery of v-cards or USB drives with no seal and no accompanying paper ballots taken to a back counting room, where observer access was limited.

This evening another IT expert noted that one of the complaints of the Trump lawsuit in Pennsylvania is the following:

The entire election could have been decided in these back rooms with nobody present.

TGP also reported on an IT specialist regarding the Dominion-based systems being used.

An IT specialist reached out to the Gateway Pundit and provided more evidence regarding the weak and non-existent system controls in place in the Dominion voting machines and applications. These machines never should have been used in a Presidential election.

One IT system expert told us that he never would have approved the Dominion system for use. It is that bad. Another IT expert provided a review of Dominion based on a vendor user guide he obtained.

In the post above we shared a tweet where [email protected] stated that the local IT guy as the power to decide elections:

After reviewing the Dominion Voting System user manual, it seems the local IT guy who services the machines is theoretically the ultimate political gatekeeper.
He has absolute power to decide elections.

This diagram shows that there are laptops or workstations onsite that some of the workers can access after the ballot images are scanned in. Our expert states that he kept thinking about the USB drives in the lawsuit and immediately noticed this is where election data (i.e. forged/faked images) could be inserted.

In the audit report the auditor states:

The Secretary of State ran the Functional Test as if it were a jurisdiction that just purchased the voting system. Testing of the system began by setting up all equipment in a configuration that mirrored a production voting system. The DS5.10 architecture allows elections officials to use one or more, permanent server(s) and set of centraloffice voting devices, known to be running unaltered, certified software and firmware to create memory cards before each election and to use another, physically separate “sacrificial” server and set of voting devices after the election to tabulate results and generate reports. To transfer election specific data, the ICP2 machines utilize SD cards, the ICC and ICE machines utilize CF cards, and the ICX utilizes USB sticks. The election specific data (files) transferred on these cards are encrypted. An iButton is required to unencrypt the SD and CF cards for the ICP2, ICC, and ICE, and a smartcard is needed to unencrypt the USB sticks used to transfer data to the ICX machines. The key used for these devices can be unified or not. A unified key is one that is election specific. A key specific to that iButton (polling place specific) can be used also. This would prevent a malicious actor from accessing the entire system with just one key.

In the audit it is reported:

This means unless you block the USB ports they are at risk of being compromised. But then the report mentions the key control weakness in these machines:

Vote-stealing software could easily be constructed that looks for undervotes on the ballot, and marks those unvoted spaces for the candidate of the hacker’s choice. This is very straightforward to do on optical-scan bubble ballots (as on the Dominion ICE) where undervotes are indicated by no mark at all. The autocast configuration setting that allows the voter to indicate, “don’t eject the ballot for my review, just print it and cast it without me looking at it.” If fraudulent software were installed, it could change all the votes of any voter who selected this option, because the voting machine software would know in advance of printing that the voter had waived the opportunity to inspect the printed ballot.

Finally, in situations like in Arizona, where voters were given sharpies instead of pens, the Dominion system could identify ink types and kick these votes out of the system.

The Dominion system was ripe for fraud and never should have been allowed near the Democrat Party.

It certainly appears that way, but this is really nothing new.  Listen to our show on voter fraud and also listen to testimony delivered under oath regarding electronic voting machines from 2006.  This really isn’t rocket science, people.