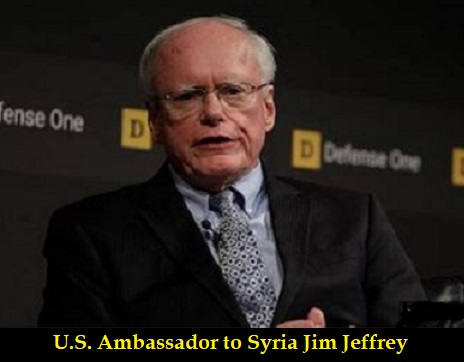 No U.S. President had ever been as lied about by the media, plotted against by the FBI/CIA, unceasingly harassed by the opposition party — the Democrats — with baseless accusations and impeachment, with those working in the administration not just disobeying but outright countermanding his policies and decisions as President Donald John Trump.

The State Department is notoriously left-leaning and a part of the D.C. swamp.

Now that the Demonrats believe Joe Biden has won the presidential election, James “Jim” Jeffrey, the outgoing U.S. Ambassador to Syria, is admitting his team lied about the number of troops in Syria so as to thwart President Trump’s policy of ending the war in Syria by withdrawing all U.S. troops from Syria.

Trump’s announcement in December 2018 of withdrawing from Syria led to the resignation of then-Defense Secretary Jim Mattis and then-Ambassador to Syria Brett McGurk.

Mattis has since become a dogged never-Trumper. But it must be noted that his resignation over Trump’s Syria policy was indisgenuous because months before resigning as defense secretary, Mattis had plotted to challenge Trump in the 2020 GOP primary.

Why Jim Jeffrey was appointed ambassador defies understanding because he had signed the infamous “Never Trump” letter while Trump was a presidential candidate in 2016. Jeffrey also gives foreign policy advice to Joe Biden.

In an interview with Defense One, Jeffrey said: “We were always playing shell games to not make clear to our leadership how many troops we had” in northeast Syria. The actual number of troops is “a lot more than” the roughly two hundred troops Trump initially agreed to leave there in 2019.

In 2018 and again in October of 2019  when Trump repeated the withdrawal order, the president maintained that ISIS had been defeated. But each time, he was convinced to leave a residual force in Syria and so the war continued.

Jeffrey said: “What Syria withdrawal? There was never a Syria withdrawal. When the situation in northeast Syria had been fairly stable after we defeated ISIS, [Trump] was inclined to pull out. In each case, we then decided to come up with five better arguments for why we needed to stay. And we succeeded both times. That’s the story.”