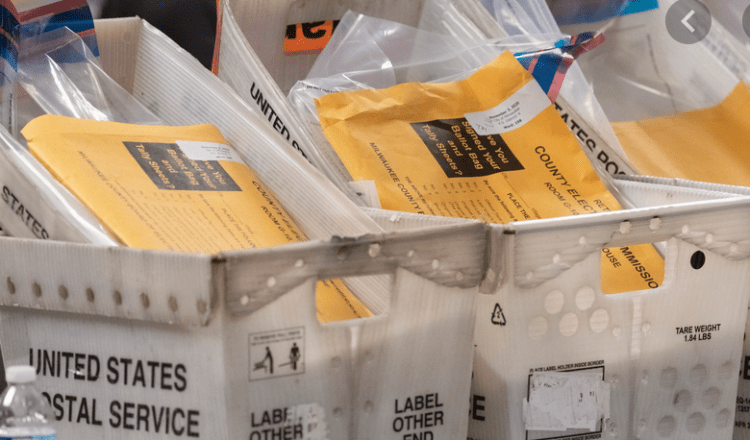 The civil action (pdf), filed on Thursday, alleges that there is “sufficient evidence that illegal votes were counted” in Milwaukee, Dane, and Menominee counties “to change or place in doubt the results” of the presidential election in the counties. The voters asked the court to declare that the counties’ results “must be invalidated” and to block the counties from certifying their results.

Biden’s Great Leap Forward: A split second in Wisconsin
I live in Switzerland and was working at my computer the morning after the U.S. election when I was stunned to see the Fox election map suddenly do something completely unnatural: in a split second between 3 A.M. and 4 A.M. U.S. Central Time, the Wisconsin icon switched from light-red Trump to light-blue Biden. In that same instant, the probability meter, which had been very accurate in 2016, likewise jerked from a 77% Trump likelihood to over 80% Biden. With Biden behind, at 3:42 A.M. on the night of the election bagged a net of 118,215 votes in a single massive data dump to take a narrow lead.

Wisconsin Voters File Lawsuit to Exclude Over 792,000 Votes in 3 Counties

Three voters in Wisconsin have filed a federal lawsuit seeking to exclude Nov. 3 election results in three of the state’s counties that helped push Joe Biden ahead of President Donald Trump. The action, if successful, would invalidate over 792,000 votes cast across the state.

The civil action (pdf), filed on Thursday, alleges that there is “sufficient evidence that illegal votes were counted” in Milwaukee, Dane, and Menominee counties “to change or place in doubt the results” of the presidential election in the counties. The voters asked the court to declare that the counties’ results “must be invalidated” and to block the counties from certifying their results.

All three counties lean heavily Democrat, with Milwaukee and Dane being among the most populous and heavily Democratic counties in the state. For the three counties, Biden holds a lead of 365,289 votes over Trump. In the state overall, Biden holds a lead of about 20,540 votes at 49.6 percent, compared to Trump at 48.9 percent as of Saturday. The Trump campaign has signaled it will request a recount.

The lawsuit stated: “Because illegal votes dilute legal votes, the evidence establishes, and will establish, that the rights of voters have been violated by vote-dilution disenfranchisement. Consequently, the presidential election results from the counties identified should not be included in certified and reported totals for presidential electors from this state.”

The suit asserted, citing past court rulings, that there is fraud risk inherent in mail-in ballots, and that voter fraud occurs more with mailed ballots than in-person ballots. It points out that Wisconsin “greatly expanded” the scope of mail-in ballots in 2020 amid the CCP (Chinese Communist Party) virus pandemic.

Plaintiffs noted that the “sudden flood of mailed ballots” this year meant that election workers in general had “less ability to carefully review them to screen out fraudulent ones, creating a substantial risk that fraudulent votes will be counted and vote-dilution disenfranchisement will occur.”

The lawsuit was filed in the U.S. District Court for the Eastern District of Wisconsin Green Bay Division. The plaintiffs are from Door County, Brown County, and Oconto County. The Wisconsin Democratic Party on Friday filed a motion to intervene (pdf).

The lawsuit states that plaintiffs “possess advanced technical capability to conduct statistical analyses identifying errors and anomalies such [as] double votes, votes by non-registered persons, votes by persons who are deceased or moved out of state, and the like.”

“Plaintiffs have persons with such expertise and data-analysis software already in place who have begun preliminary analysis of available data to which final data, such as the official poll list, will be added and reports generated,” the suit said, suggesting that the results will show that “sufficient illegal ballots were included in the results to change or place in doubt the Nov. 3 presidential election results.”

They said that the expert report will “identify persons who cast votes illegally by casting multiple ballots, were deceased, had moved, or were otherwise not qualified to vote in the Nov. 3 presidential election, along with evidence of illegal ballot stuffing, ballot harvesting, and other illegal voting.”

The plaintiffs are seeking “immediate production of registration, election, and other data to conduct and present those analyses to the court.”

Plaintiffs also took issue with a 238 percent increase—from 72,000 last year to 243,900 ahead of the Nov. 3 election—in a type of absentee ballot registration where voters self-report as “indefinitely confined.” This type of registration would mean that the voter wouldn’t need to present the ID normally required of a standard absentee ballot.

Wisconsin law regarding voter ID provides exceptions for individuals who declare as “indefinitely confined” either due to age, physical illness, infirmity, or disability, on their absentee ballots.

The suit alleged that the town of Menominee in Menominee County in early spring “encouraged” voters to vote absentee and provided instructions (pdf) that said “indefinitely confined” voters “are not required to provide a photo ID.” The suit also noted that Dane County and Milwaukee County earlier this year had “openly advised voters to indicate that they are ‘indefinitely confined.’”

The Republican Party of Wisconsin said earlier this year that the clerks’ advice in the respective counties were “willfully ignoring” state election law, and the Wisconsin Supreme Court subsequently ruled that the counties’ advice were “legally incorrect.”

The plaintiffs also noted the situation surrounding absentee ballot witness signatures and their addresses on the ballot envelope.

Under Wisconsin law, a ballot cannot be counted if the witness’s address is not present. However, the plaintiffs noted how the Wisconsin Elections Commission had issued guidance (pdf) saying that the issue could be cured by the clerk without the witness appearing.

The suit argued that the clerks “have no authority to accept the ballot,” and cites how Wisconsin law states (pdf) that “if a certificate is missing the address of a witness, the ballot may not be counted.”

The suit also pointed out several individuals, identified by their initials only, who alleged that they encountered voting irregularities, which included having received unsolicited ballots, or having received more absentee ballots than expected, and finding names of deceased voters who, according to myvotewi.gov, cast an absentee vote.

A number of media outlets declared Democratic nominee Joe Biden president-elect on Nov. 7. President Donald Trump has alleged voter fraud and said any declarations of victory are premature, without specifying how widespread the alleged cases are. His campaign has launched multiple legal challenges in Pennsylvania, Wisconsin, Georgia, Arizona, Nevada, and Michigan, over a variety of alleged voting irregularities.

States face a Dec. 8 deadline for resolving election disputes and certifying presidential electors. Electoral College votes will be cast on Dec. 14. As such, the plaintiffs in the case are seeking a quick decision from the court.

The Epoch Times won’t declare a winner of the 2020 presidential election until all results are certified and any legal challenges are resolved.