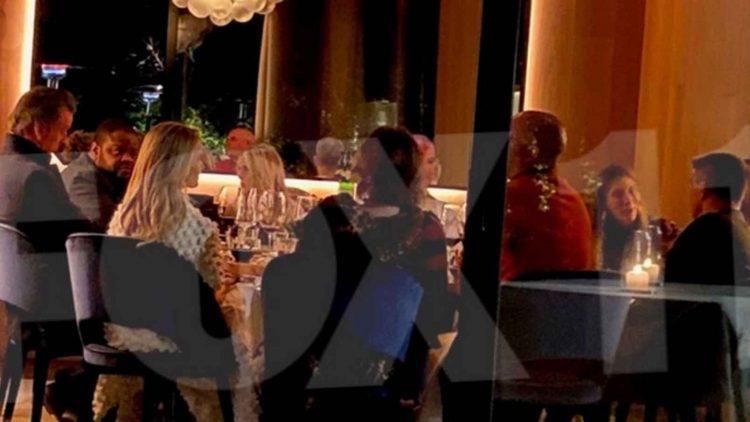 A week before issuing a statewide mask mandate and a few weeks after trying to ban Thanksgiving, Governor Newsom attended a dinner party, maskless, for a lobbyist.

The size of the party, a dozen people, contravened, Newsom’s own Thanksgiving crackdown limiting gathering sizes and urging members of different households not to mingle. The photos also contravened Newsom’s 87 to wear a mask at dinner between bites.

“COVID-19 has NOT gone away. Take the new case rates seriously. We cannot let our guard down,” Newsom had urged on Twitter. “Wear a mask, limit mixing with those you don’t live with, and physically distance.”

Photos of the dinner party showed no social distancing, no mask wearing, and no precautions.

Those attending the party included not only Newsom, but top California Medical Association officials. The CMA had lobbied to suspend “non-urgent” and “non-essential” procedures. It had also cheered Newsom’s mask mandate warning that “anti-science extremists” were “putting public health at risk” in an ad campaign released earlier this summer by the association.

The anti-science extremists apparently include the CEO of the California Medical Association.

Newsom’s dinner party comes after D.C. Mayor Muriel Bowser violated her own quarantine, traveling to Delaware for Biden’s election party, one of the “high-risk” states, while partying with Democrat political operatives, before returning home and then refusing to quarantine.

Bowser claimed that she didn’t have to follow her own rules because it was “official business”.

The coronavirus is presumably obliging enough not to infect politicians who are traveling on official business to party with fellow Democrats, but knows to infect people at Trump rallies.

“There are times when we actually do need to have relief and come together, and I felt like that was one of those times. That crowd was gathered whether I was there or not,” Lightfoot argued.

Of course, all of this isn’t really news.

Governor Whitmer’s husband was already caught demanding his boat, Governor Pritzker’s family was caught traveling around the country, Governor Murphy was caught dining indoors, Governor Cuomo didn’t bother social distancing or wearing a mask at a Sharpton event, Mayor Lightfoot was caught getting a haircut, and Speaker Pelosi was caught at a hair salon.

Senator Dianne Feinstein was caught repeatedly not using a mask, and Senator Kamala Harris had no problem piling into an elevator with her entire staff. All this is just business as usual.

Even without listing the numerous Black Lives Matter marches and Biden victory parties, or the Women’s March in D.C., it’s all too obvious that Democrat leaders don’t follow the rules.

And that leads to one of two inevitable conclusions.

Either Democrat leaders are suicidal or the mask and lockdown regimen doesn’t work.

But what absolutely cannot be true is the media narrative that Democrats are following science and should be trusted to lead us through the pandemic using a regime of lockdowns and masks.

The same Democrat leadership lecturing us that masks save lives goes maskless whenever it can. And that might be forgivable if they weren’t constantly pretending that the only people not wearing masks are Republican scofflaws who are endangering all of us with their selfishness.

The only thing more unforgivable than corruption is hypocrisy.

But the fundamental question is why Governor Newsom, Governor Cuomo, Mayor Bowser, Mayor Lightfoot, and so many others are casually violating their own restrictions and guidelines.

If Governor Newsom truly believed, as he tweeted, “Wear your mask. Physically distance. Do not let your guard down. Your actions could literally save lives”, would he have joined a crowded party at the French Laundry for a lobbyist and adviser, without doing any of these things?

The only two rational conclusions are that Governor Newsom has no regard for his own life (we already know that he, like most Democrat governors on this list, has no regard for human life when he ordered skilled nursing facilities to accept coronavirus patients in a cruel act that one geriatric doctor compared to, “premeditated murder”) or he doesn’t believe his own guidance.

Newsom, Cuomo, Murphy, Whitmer, and Pritzker, not to mention Pelosi, Feinstein, Bowser, and Lightfoot, can be accused of many things, but a willful disregard for their lives isn’t one of them.

That leaves us with the cold hard reality that they don’t believe the things that they’re telling us.

Some of the violations of guidance meant to stop the spread of the virus can be dismissed as selfishness that doesn’t directly put Whitmer or Pritzker at risk. But when Newsom and Cuomo, among others, casually hang out in close proximity without masks, there’s only one conclusion.

They don’t practice this stuff because they don’t think it works.

What do they know that we don’t? Mostly, that nothing they’re doing will really make a difference, but that they need to be seen to be doing something. This is a common problem in politics. President Trump suffered from poor ratings on the coronavirus because, while his administration did practical things behind the scenes, it didn’t impose abusive mandates.

People expect medicine that really works to taste bitter and any real approach to a crisis to cause pain. That’s why we have to take off our shoes and belts when we fly even though the TSA has not stopped a single terrorist attack after all these years of airport shoelessness.

But the TSA was never meant to stop terrorism. It was there to show that the government was taking the problem seriously. And the more miserable flying became, the tighter the security.

Congress spends a lot of its time holding entirely useless hearings that only exist so that its members can tweet about how seriously they’re taking the thing that the hearing is about.

Governor Cuomo mismanaged the coronavirus in the worst way possible, lying to the public, sending thousands of infected patients into nursing homes, imposing lockdowns and bragging his way through innumerable press conferences, before illegally scapegoating Orthodox Jews for the virus ahead of the second wave, but never missed a press opportunity or book deal.

That’s why his coronavirus leadership book hit the bestseller lists ahead of the morgues.

Democrat politicians know exactly how to navigate the pandemic, not to save lives, but to maximize their approval ratings, book sales, and potential presidential runs down the road. It doesn’t matter how many people die. Arguably more people dying in your state is better.

Just ask Cuomo who still holds down a nationwide championship in coronavirus corpses.

What is really important in any crisis is to be seen taking it very seriously by holding constant press conferences and imposing pain, lockdowns, restrictions, mandates, on the public. The more people suffer, the more a politician must get credit for doing everything to fight the virus.

The governors know that what they’re doing isn’t working and they don’t know what does. Their strategy isn’t to protect the people in their states, but to protect their political careers.

To find out what people really believe, don’t listen to what they say, watch what they do.

Governor Newsom knew, before imposing his statewide mask mandate, that masks don’t work. If he thought they did, he would have been wearing one while hanging out with his pals. But to a lot of people, masks provide a sense of control and so politicians happily mandate masks.

Newsom, Cuomo, Whitmer, Murphy, and the rest of the gubernatorial gang don’t have a plan to deal with the virus. Their only plan is to wait it out and come out looking good. That’s why they wear masks in front of the camera and then take them off the first chance they get.

They’re not leaders, they’re politicians, with no clue what to do in a real crisis. Except lie.

As winter is upon us, there are only two possible explanations why so many governors repeatedly violate the rules that they tell us mean the difference between life and death.

Either they’re suicidal or they’re lying to us.

Since none of them have yet grasped a noose, put shotguns in their ears, or plunged needles filled with uncut heroin in their veins, they’re not suicidal. They are corrupt and incompetent. And while they destroy the lives and livelihoods of millions, they go on partying behind closed doors.