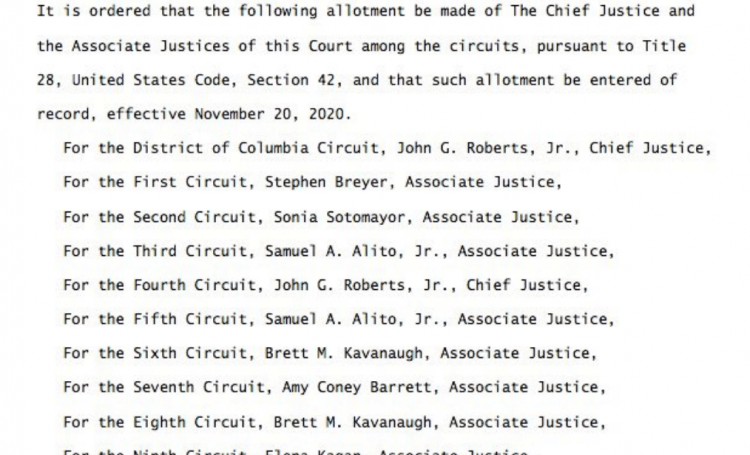 So, here we go!  The supreme Court will more than likely get involved, as I predicted concerning the three justices on the court who were involved in the Bush v. Gore fiasco in 2000.

Last night, Trump Team’s lead counsel Sidney Powell spoke of the “most stunning, most egregious” piece of evidence the campaign has. Powell referred to a young military officer “who saw it all done and was there when it was created.”

“We’ve got all kinds of evidence that is mathematically irrefutable by experts, including three professors at Princeton, and it all proves the same thing, the evidence of individual poll watchers who saw votes come in, saw the machines manipulated,” she added.

Here is the evidence.

BREAKING: Look who is now in charge of PA, WI, MI, and GA

Circuit Courts have been Reassigned

BREAKING: Look who is now in charge of PA, WI, MI, and GA

Circuit Courts have been Reassigned

It is ordered that the following allotment be made of The Chief Justice and the Associate Justices of this Court among the circuits, pursuant to Title 28, United States Code, Section 42 and that such allotment be entered of record, effective November 20, 2020.