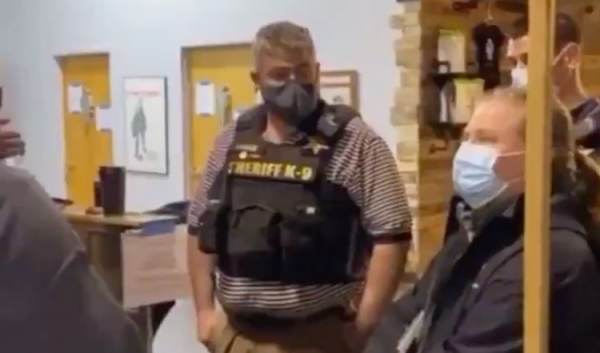 Good!  This needs to be occurring all over the united States.  This imposition of unlawful and unconstitutional orders on healthy people is an infringement upon liberty, which makes these sheriffs criminals, as well as the health inspector.  By the way, it also makes Governor Cuomo worthy of the death penalty… more on that below.

A gathering of about 50 business owners and their supporters inside an Orchard Park gym shut down by Covid-19 restrictions turned into a confrontation with Erie County authorities Friday night.

The owner of the gym, Athletes Unleashed on California Road, described the gathering as a protest of the state’s “orange zone” regulations that have closed gyms, salons and other businesses deemed nonessential.

No one was cited and no arrests were made, according to two people who attended, but video of the incident shows an Erie County health inspector accompanied by three sheriff’s deputies arriving about 20 minutes after the gathering began.

“You’re on private property. You need to leave!” one of the business owners shouted to the health inspector.

“This is a private party! It’s private property! Go get a warrant! You’re not wanted here!”

While the overweight sheriff tried to lecture business owners about wearing masks, one of the owners said, “Don’t worry about my health! My health isn’t your concern!”

They then followed the sheriffs and health inspectors into the parking lot where they told them again to get off their property.

“They’re Nazis!” one yelled. “Take your Commie sh*t elsewhere!” another one shouted.

Really, it’s a beautiful thing to watch… and you can, below.

As for Cuomo, as well as these sheriffs who are attempting to deprive people of their rights, they should know they are skirting with a crime that, according to 18 U.S. Code § 242, can result in a death penalty.