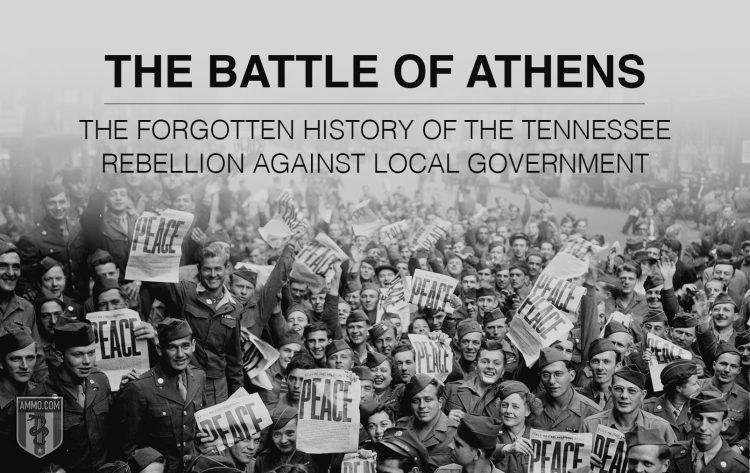 The Battle of Athens, Tennessee. Ever heard of it? It was an armed rebellion led by World War II veterans and citizens in Athens and Etowah, Tennessee against the tyrannical local government in August of 1946. A movie was even made about it, released in 1992 under the name “An American Story”.

Deputies commonly accepted bribes, intimidated voters, tampered with ballot boxes, and began beating those who spoke out. The sheriff’s department falsely ticketed and arrested individuals to obtain finances for personal and political purposes. The sheriff and his deputies received a fee for every person they booked, incarcerated, and released; the more human transactions, the more money they got. Local political bosses were just as corrupt.

The U.S. Department of Justice received complaints from county citizens of electoral fraud in the 1940, 1942, and 1944 elections. These complaints went unanswered.

The tyrannical establishment outraged World War II veterans returning to their home county. During the 1946 election, veterans fielded their own nonpartisan candidates and attempted to have a fraud-free election.

The veterans, anticipating trouble from corrupt politicians, sent a message for assistance with the election and keeping the peace in McMinn County to the Tennessee Governor and Secretary of State.

Lones Seiber writes about the Battle of Athens in American Heritage magazine, “… corrupt Democrat law enforcement started harassing returning GIs – making a habit of picking up GIs and fining them heavily for most anything. They were…’kind of making a racket out of it,’ said veteran Bill White.”

“After long hard years of service, most of us were hard-core veterans of WWII. We were used to drinking our liquor and our beer without being molested. When these things happened, the GIs got madder—the more GIs they arrested, the more they beat up, the madder we got”.

On August 1st, 1946, Election Day, Sheriff Mansfield brought in two to three hundred “deputies” to detain and beat ex-GI poll watchers. In addition, Mansfield and his “deputies” took the ballot boxes back to the jailhouse for an “official” count.

Taking the ballot boxes constituted a violation of Tennessee law, as it was required that ballots must be counted in full view of the voting public.

Enraged veterans armed themselves and sought to obtain the ballot boxes to prevent electoral fraud and tyranny. The conflict that followed became known as The Battle of Athens.

The veterans succeeded in storming the jailhouse and flushing out the corrupt politicians and “deputies”, placing their prisoners under citizens’ arrest in the jailhouse.

Mr. Seiber continued, “With the Cantrell forces conquered, ten years of suppressed rage exploded. The townspeople set upon the captured deputies and, but for the GIs, probably would have killed them all. Joined by a number of their fellows, the GIs cleared the jail of the rioters and locked up their prisoners for the night…Miraculously, there had been no deaths.”

“But on August 2nd a page-one headline in The New York Times wrongly trumpeted the news:

Even back then, the fake news was quick to jump on a story if it put 2nd Amendment loving veterans in a negative light. Mr. Seiber writes, “The national press was almost unanimous in condemning the action of the GIs. In an editorial, The New York Times concluded: “Corruption, when and where it exists, demands reform, and even in the most corrupt and boss-ridden communities, there are peaceful means by which reform can be achieved. But there is no substitute, in a democracy, for orderly process.” However, the paper of record for the nation’s elite offered no guidance as to how, without meeting corruption and violence head-on, that such an orderly process might be achieved.”

The veterans were never prosecuted for their armed resistance to unbridled tyranny. All of the weapons the GIs borrowed from the local armory were cleaned and returned before sunrise the next morning.

Seiber concluded, “Armed GIs patrolled streets that were still tense with rumors of a Mansfield army poised to reclaim Athens. Hundreds of men were issued permits to carry weapons, and machine guns on rooftops guarded the approaches to town.”

The ex-GI electoral candidates were ultimately victorious over the deeply entrenched and corrupt political machine. The rule of law had been restored to McMinn County, Tennessee, thanks to its veterans.

Columnist George Rasley writes “…as the Battle of Athens demonstrated, Americans are not inclined to accept being bullied into submission to corrupt Democrats, and when peaceful means fail, natural law allows a remedy from the people for corruption and political oppression.”

May we never forget this important lesson in Tennessee history. Voter fraud, corruption, and tyranny have existed for a long time. But in our advanced, civilized, free society that operates by the rule of law, there is no excuse for bowing to tyranny. And when all other constitutional remedies fail, the 2nd Amendment enforces all the others.

God bless our brave veterans. They are willing to honor their oath to defend us from all enemies, foreign and domestic, even after returning home when their service is complete. May we be thankful they are willing to sacrifice everything for our freedom right here at home.

Read more at AmericanHeritage.com “The Battle of Athens.”

The Language of Liberty series is an outreach project of Center for Self Governance to educate citizens in the principles of liberty. The views expressed by authors are their own and may not reflect the views of CSG.

The Language of Liberty series is a collaborative effort of the Center for Self Governance (CSG) Administrative Team. CSG is a non-profit, non-partisan educational organization, dedicated to training citizens in applied civics. The authors include administrative staff, selected students, and guest columnists. The views expressed by the authors are their own and may not reflect the views of CSG. To learn more, go to CenterForSelfGovernance.com.
Share
Tweet
Share
Pin