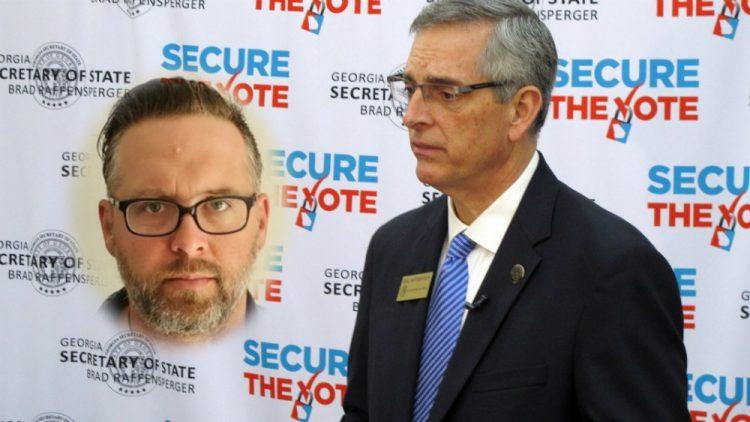 Director of product strategy and security for Dominion Voting Systems, Eric Coomer, is  an Antifa radical who is a key player in the massive voter fraud in voter tabulating systems.

Dr. Eric Coomer who is responsible for the strategy and Security at Dominion Voting Systems.

But if you search the company’s profile Eric Coomer has since been removed from their page of directors.
This was after Coomer was found to be a Trump-hating Antifa sociopath.

She Never Got Married, and Now We Know Why
newzgeeks.net
Ads by Revcontent

In 2016 Coomer told the Illinois States Board of Elections that it was possible to bypass election systems software during the vote counting process.

And in 2017 Eric Coomer explained how to alter votes in the Dominion Voting Systems in a Chicago demonstration.

This then is the SECOND VIDEO of top Dominion executive explaining to elections officials how to alter votes with the Dominion machines!This was a separate demonstration in the Chicago area (notice he is wearing a dark jacket and is without the wrist protector.)

2017 DR. ERIC COOMER EXPLAINS HOW TO ALTER VOTES IN THE DOMINION VOTING SYSTEM

THIS SEEMS ABSOLUTELY RIPE FOR FRAUD

“Don’t worry about the election, Trump’s not gonna win. I made f**king sure of that!” – Dr. Eric Coomer VP of US Engineering for US Dominion Voting Company pic.twitter.com/dEuPIzGOlC

According to reports in late September Dominion’s radical Leftist Eric Coomer made a “critical software change” to GA’s Dominion voting machines “without adequate testing or certification from the U.S. Election Assistance Commission”.

This was reported in the Atlanta Journal Constitution.

Now this…
A group of Georgia attorneys sued the state after news of the last minute changes to the Dominion voting machines. They called for paper ballots to be used instead of the controversial computer voting systems.

Secretary of State Brad Raffensperger called in Dominion’s Eric Commer to testify for him in the state’s defense.

Georgia election officials told a federal judge Monday that they’ll quickly correct a problem with touchscreen voting computers that left off the names of some of the 21 candidates in a special election for the U.S. Senate.

But attorneys suing the state government said they’re alarmed by technical difficulties so close to the time in-person early voting begins on Oct. 12. They want the government to replace the touchscreens with paper ballots filled out by hand.

Software on the state’s 30,000-plus touchscreens will be replaced to prevent an issue where the second column of U.S. Senate candidates sometimes didn’t appear. Those candidates included Republican U.S. Sen. Kelly Loeffler and Democrats Matt Lieberman, Ed Tarver and Raphael Warnock. Another Republican candidate, U.S. Rep. Doug Collins, wasn’t affected because his name appeared in the first column.

“The plaintiffs are flagging this as some apocalyptic scenario on social media, and it’s not. This is a very minor issue,” said Bryan Tyson, an attorney for Secretary of State Brad Raffensperger.

The issue, discovered last week during pre-election equipment testing in Douglas and Richmond counties, occurred when the second column of candidates didn’t appear because of a technical problem with how touchscreens communicated with their underlying Android operating system, said Eric Coomer of Dominion Voting Systems. He said the problem only happened rarely, when users made selections in a specific pattern.

David Cross, an attorney for the plaintiffs, said making a critical software change shows that the state’s voting technology is vulnerable to problems.

He said the software upgrade is being made without adequate security testing or certification from the U.S. Election Assistance Commission. But Coomer said the change is minor and doesn’t require recertification.

Election officials halted testing in the 77 counties where it had begun after they learned about the problem, said Gabriel Sterling, statewide voting system implementation manager.