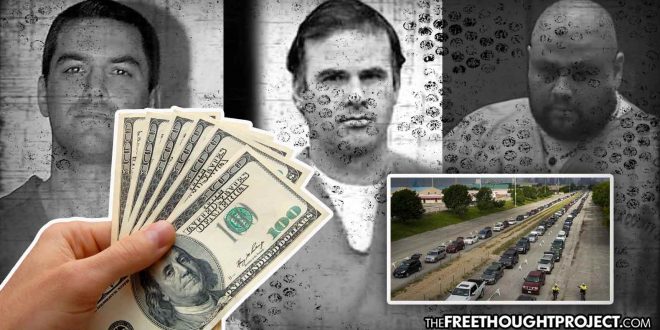 When the politicians on taxpayer funded salaries sit around and discuss which businesses to keep open and which businesses to shut down, they never consider limiting their salaries or cutting their funding. They simply force people out of business and offer nothing in return. In states that do offer some relief to shuddered businesses, the programs fall far short of the mark for small business owners, enrich already large corporations, or as the following case illustrates, puts millions in the pockets of murders, rapists, and child traffickers — some of whom are on death row.

Scott Peterson, convicted of killing his wife and unborn son, Cary Stayner, convicted of murdering two woman and children, and Isauro Aguirre, convicted of torturing an 8-year-old girl to death, all have two things in common. The first thing they have in common is that they are all on death row in California prisons. The second thing these disgusting monsters have in common is that they, along with murderers, rapists, and human traffickers in 35 California prisons, received pandemic relief amounting to over $140 million.

The LA Times reported that this was “the most significant fraud on taxpayer funds in California history,” according to a letter obtained by The Times.

“It is a manifest problem that cannot be ignored, and the governor needs to take steps to address it,” said McGregor Scott, U.S. attorney for the Eastern District of California.

Prosecutors told the Times that the fraud is entirely and easily preventable and they asked Gov. Newsom to step in and “turn off the spigot” of payments to incarcerated people. However, according to Sacramento County Dist. Atty. Anne Marie Schubert, who helped form and lead a task force on the issue, the Employment Development Department (EDD), seems unconcerned with the problem.

Schubert and Dist. Atty. Cynthia Zimmer of Kern County said the alleged fraud was taking multiple forms; some claims may have been submitted by inmates directly or by family and friends to whom they gave their personal information. Other inmates may be unwitting victims, according to the Times.

Adding to the insidious nature of giving violent felons millions of dollars is the fact that some of them are using this money to post million dollar bail amounts and get out.

According to the report, in total, nearly a billion dollars was paid out fraudulently through the relief system.

“The murderers and rapists and human traffickers should not be getting this money,” said Schubert. “It needs to stop.”

We agree. Had the government implemented the easy security practices, the fraud would have been minimal. Instead, those who wanted to exploit the system were able to steal money from people who desperately need it in a situation that’s akin to taking candy from a baby. In fact, it is so easy, that even though this investigation was launched, the fraud continues.

“Really, at this point stopping the bleed is the most important thing, because the fraud is continuing,” said Fresno County Dist. Atty. Lisa Smittcamp, who has found about 860 questionable claims from inmates at Pleasant Valley State Prison, amounting to about $3.6 million. “These are just random cash cards they are sending out, and they are being completely irresponsible with taxpayer money.”

The result is the same, however, and the billion dollars that could’ve have gone to feeding hundreds of thousands of Californians who are unemployed and in the midst of a food crisis, went to child traffickers and murderers.

As TFTP reported, this food crisis is very real. Though many of the signs are obvious, like thousands of cars lining up in Dallas, Texas to get food handouts, other signs are unfolding behind the scenes and are affecting millions. According to an analysis from Feeding America, food insecurity will hit 52 million people due to COVID-19 in the United States, which is an increase of 17 million people from pre-pandemic times. Supply line disruptions, lower levels of donations, and millions of unemployed people who’ve lost their jobs due to government-imposed lockdowns have created a massive strain on America’s food supply and more and more family’s are being pushed into a situation of food insecurity.

In the meantime, government leaders seemingly couldn’t care less about the plight of the people and continue to force business to close while offering zero support. And, as this case illustrates, when they do offer support, it is in the form of a wasteful disaster that allows criminals to steal taxpayer money.

It’s not just the brink of starvation that millions of Americans face either. Thanks to government-mandated lockdowns, a record number of Americans are unable to find jobs as businesses are forced to close or have gone out of business permanently. This is creating a situation in which families are unable to pay their rent — leading to the potential for mass evictions.

In March the CARES Act imposed a federal moratorium on evictions, which mandated that it was illegal to evict tenants who participate in federal housing assistance programs or who live in properties with a federally backed mortgage loan due to the nonpayment of rent. When the CARES Act moratorium expired on July 24, a host of state and local governments passed their own eviction prevention measures—but these actions varied significantly across the country and left many renters vulnerable to eviction once again.

Then, on September 4, the Centers for Disease Control and Prevention issued another moratorium on evictions through December 31, 2020. While this will certainly help those who rent — temporarily — all the moratorium did was pass the burden onto the landlord who may no longer be able to pay the mortgage on the property without the incoming rent.

And no, contrary to what many believe, most landlords are not mega rich property owners and actually live modest lifestyles.

In fact, according to an analysis by the Brookings Institute 40 percent of residential property units are owned by individual investor landlords. Among those owning residential investment property, roughly a third are from low- to moderate-income households; property income constitutes up to 20 percent of their total household income.

Now, as hundreds of millions go to murderers, rapists, and human traffickers instead of the taxpayers who need it, without some sort of assistance another massive crisis is unfolding.

The moratorium doesn’t forgive rent payments, it only allows the renter to defer them. However, if a tenant cannot come up with monthly rent right now, the idea of paying back multiple months of compounded rent after the moratorium is over, will be all but impossible.

This lack of income will then be passed to the small business landlord who will then default on their loan payments and these houses will be repossessed by the banks. Given that the majority of rental homes are owned by individual “mom and pop” operations — not massive real estate companies — the resultant defaults could be catastrophic. Bank owned homes will likely not be subject to a moratorium and the occupants will be thrown out on the street.

One would think that the government would be paying attention to these food and housing crises and take action to prevent the inevitable collapse that will ensue with their current policies in place. That action would come in the form of rental assistance or other relief packages that could prevent such a devastating chain reaction of default and subsequent eviction. Unfortunately, however, government is allowing these programs to be exploited and stolen from as murderers on death row enrich themselves while Joe Sixpack on Main street contemplates suicide for being unable to feed his family. Ahhh, the American dream.