Well are you, Los Angeles?  What about other parts of the country where tyrants are infringing on your God-given rights over a scamdemic?  People, it’s going to cost you something now, or it’s going to cost you a whole lot more later.  It’s far past the time that the people dealt with the tyrannical mayors, city councils, county councils, governors and anyone else that seeks to use “safety” and “public health” as a mask, no pun intended, for their tyranny.  The County of Los Angeles, California is no different.

According to the “Safer at Home Order” by the County of Los Angeles Public Health:

All public and private gatherings with individuals not in your household are prohibited, except for church services and protests.

Occupancy Limits (all individuals at these sites are required to wear face coverings and keep at least 6 feet of distance): 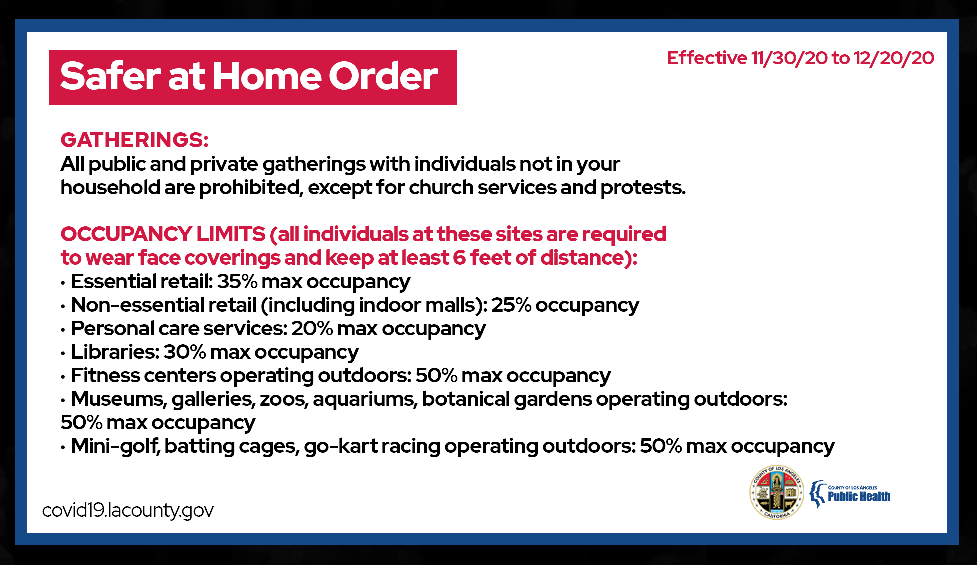 Every bit of this is unconstitutional!  Every single bit.

Why?  First, the US Constitution provides protections from the US federal Congress from writing laws against such things in order to not infringe on the rights of the people.

Congress shall make no law respecting an establishment of religion, or prohibiting the free exercise thereof; or abridging the freedom of speech, or of the press; or the right of the people peaceably to assemble, and to petition the government for a redress of grievances. Amendment I of the US Constitution

Now, we are not even talking about the feds here. We are talking about both local elected representatives and unelected bureaucrats infringing on the people’s rights.

You see, these rights are God-given and not to be infringed at any level!  Just go back to what our founders declared about the tyranny they were fighting against in the War for Independence.

We hold these truths to be self-evident, that all men are created equal, that they are endowed by their Creator with certain unalienable Rights, that among these are Life, Liberty and the pursuit of Happiness.–That to secure these rights, Governments are instituted among Men, deriving their just powers from the consent of the governed, –That whenever any Form of Government becomes destructive of these ends, it is the Right of the People to alter or to abolish it, and to institute new Government, laying its foundation on such principles and organizing its powers in such form, as to them shall seem most likely to effect their Safety and Happiness.

Besides take-out and delivery, restaurants and bars will remain closed under the new demand.  Certain other “non-essential” facilities, such as playgrounds and card rooms, will be closed altogether. Outdoor recreation will be “permitted”, but only for individuals from the same household, who will be required to wear face coverings and remain six feet away from other people.

There should be no illusions as to whether or not you are free at this point. This won’t end until we all decided these tyrants do not have any power over us.

LA County. by far California’s most populous with over 10 million residents, has so far recorded more than 387,000 coronavirus cases (with tests not intended for this purpose) and some 7,600 deaths, according to official data. The district has seen a “surge” in cases in recent days.  California as a whole is among the worst-affected states in the US, approaching 1.2 million cases and over 19,000 deaths, according to the rigged numbers.

Government has zero authority declaring what you do that is not a crime and being outside, assembling together and engaging in work are your God-given rights.  In fact, your Creator commands such of you in the first place!  This is not just an attack on basic rights of people, it’s an attack on God’s law!

Are the people of LA just going to sit back and take this or will they follow in the footsteps of the prophets, Jesus, the apostles and our forefathers who resisted tyranny in obedience to God?