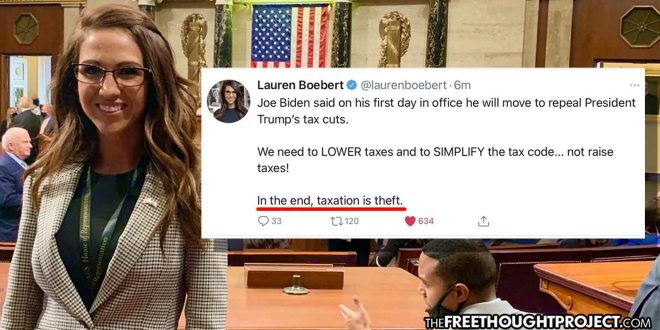 With Congressman Justin Amash announcing that he will not seek re-election in July, those who advocate for limited government and individual liberty were dealt a blow to their thoughts for the future. Without radical pro-peace and anti-statist representatives inside Congress, there is no one to oppose endless wars and massive debt spending. While the outlook was bleak, those who hold dear personal liberty and freedom were given a little optimism recently from Colorado’s newest Congresswoman from the 3rd district, Lauren Boebert — who took to Twitter to declare that “Taxation is Theft.”

Earlier this year, Boebert took out the 5 term Congressman Scott Tipton in the Republican primary and went on to win a seat in Congress on November 3. She owns a restaurant in Rifle, Colorado called Shooters Grill in which the waitresses and waiters open carry their pistols while at work. You won’t see any mass shootings taking place in there.

But most notably, Boebert took to Twitter last week to declare that “In the end, taxation is theft.”

“Joe Biden said on his first day in office he will move to repeal President Trump’s tax cuts. We need to LOWER taxes and to SIMPLIFY the tax code… not raise taxes! In the end, taxation is theft,” wrote the Congresswoman-elect.

Looking at her other tweets, it appears that Boebert is far from Ron Paul, Justin Amash or Thomas Massie, but making declarations like these certainly add a sliver of hope to the future.

Naturally, she was hit with the predictable statist responses such as, “Taxation is theft? How do you think we pay for roads?”

Sadly, this is the argument by confused souls across the planet who think they need to be extorted by government — that often pays 1000 times more for labor and materials — to have things like roads.

The answer to those questions are simple, however. Government does not build roads, private companies do. The government simply steals money from you and then pays private contractors to do the work. Certainly after thousands of years of civilization, humans can figure out how to build roads without stealing from one another, right?

What’s more, the income tax didn’t exist originally in this county. In less than a century, however, people went from keeping the entire product of their labor to being threatened with government force if they don’t offer up a certain percentage. This is slavery.

What percentage of the product of your labor can be stolen that makes it not theft and slavery?

Sadly, most Americans today do not know they are slaves. Of course, this notion sounds insane on the surface. However, try to keep 100% of the product of your labor and see if you do not get punished by the state, thrown in prison and forced into labor. No, the masters of today don’t use whips and chains to keep us oppressed; they use the law and the money.

In her years as an activist, Harriet Tubman risked her life to rescue around 70 people. These 70 people all had the same power to flee their captors as Harriet Tubman did. However, they needed her to incite the wildfire of liberty inside them before they realized they had the ability to resist and escape.

While she only freed 70 people, her actions led to the eventual abolition of slavery. Because of her work, Harriet crossed paths with Sojourner Truth and Frederick Douglas, who pushed together to rid their land of the vile acceptance of slavery.

In the meantime, however, those who refused to go along with the freeing of the slaves, plotted in the background and as the world gradually became freer, they waited for their time to strike.

The wars of American history were not fought with sticks and stones — they require weapons. All wars cost money, and all governments borrow that money to fund them. The banks love this tendency of governments to wage war as it enriches them for decades to come.

Every few decades, the greedy politicians, working from buildings built by slaves, would propose plans to tax the income of the citizens. As their ‘free’ labor diminished and debts on the costs of war increased, their attempts become more overt and more frequent.

In July 1861, the Congress passed a 3% tax on all net income above $600 a year, but no one paid it. Then, in 1864, for the first time, Americans had to swear to the veracity of their taxes, and government assessors could challenge that credibility — the seeds of what would eventually become the IRS were spawning their wicked roots.

In 1895, President Grover Cleveland opposed the income tax, but let the law pass without his signature, with faith that the Supreme Court would finally strike it down as unconstitutional — and they did, in a 5-4 ruling, noting that the income tax’s provisions amounted to a direct tax, which was prohibited by the U.S. Constitution.

Article I, Section 8 and 9 declares that direct taxes must be apportioned amongst the states according to the census.

But the bankers needed their debt payments on all the funds they lent to both sides during the civil war, and they weren’t about to let a little piece of paper like the Constitution get in their way.

In 1910, Richard E. Byrd, speaker of the Virginia House of Delegates, predicted the leviathan that was on the horizon, “a hand from Washington will be stretched out and placed upon every man’s business. . . . Heavy fines imposed by distant and unfamiliar tribunals will constantly menace the taxpayer. An army of Federal officials, spies and detectives will descend upon the state. . . .”

Sounds like the IRS of today, doesn’t it? The sole duty of the IRS is to make sure Americans pay “their fair share.” But what is fair? If they took 100% of our income, this would be de facto slavery, right? So then, at what percentage does the theft of our labor not become slavery?

Unfortunately, all the warnings throughout the years fell on deaf ears.

As Adam Young writes for the Mises Institute, the income tax returned as the product of an unholy combine between statist intellectuals with visions of state-sponsored utopias, envious demagogues and the desire by established, wealthy interests to prevent any competition to their place and to offload business costs to an expanding regulatory welfare state.

At first, the revenue raised by the new income tax was disappointing: only $28 million in 1914. But then it accelerated. $41 million the next year, when the top rate was 7%, and nearly $68 million in 1916, when it was raised to 15%. Eventually, more than $1 billion would be pulled in by the income tax during the whole of World War I, when the rates were raised to 67% in 1917 and 77% in 1918, and make the hated tax the permanent feature it has become today.

Since 1913, all of this taxation and new modern slavery has been facilitated, largely by the group responsible for printing America’s currency — the infamous privately owned, Federal Reserve Bank.

We hope that Boebert may bring this knowledge to her constituents who voted her in, as well as the rest of the country during her time in Congress.