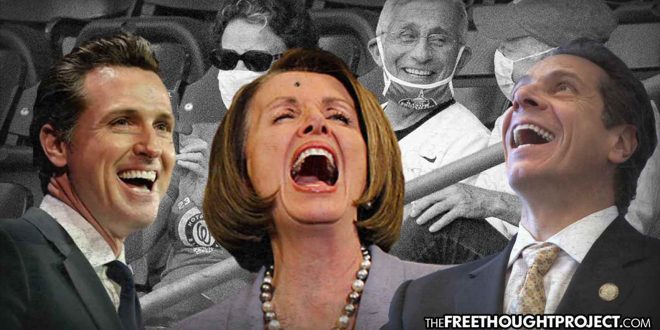 As COVID-19 cases continue to rise across the country, the government is responding the only way they know how — arbitrary rules backed by the threat of force. Business owners who flout lockdowns have been arrested, beaten, jailed, and even family gatherings have been raided like they are child trafficking rings.

Despite brutal lockdowns, mandates, the complete destruction of the economy, and putting the police state on steroids, cases are still rising. Every time they rise, the politicians take to their podiums and blame the citizens for not following their dictates close enough. More force is threatened and more arbitrary rules rolled out. Despite the utterly horrifying effects of the lockdowns, politicians across the country keep forcing them on the citizens. Why is that?

Well, one of the reasons these politicians are just fine and dandy with putting millions of people out of business, sparking an epidemic of depression and suicide, and locking down their states is because it doesn’t really have an effect on their lives at all. Regardless of what happened to the economy, every single government worker, from cops to the president, has kept their job, and received their weekly taxpayer funded paychecks — all the while getting an extended vacation — some of them literally.

On top of the fact that these politicians and government workers all keep their jobs, many of them have been caught breaking the very dictates they doled out. After all, hypocrisy is one of the key traits to being a successful politician.

The Free Thought Project has compiled a list of politicians who’ve been caught breaking their own rules. Because there are so many of them, this list is not complete, but should serve as a wake up call to those who think their ostensible leaders have their best interests in mind. In the cases below, many of these politicians advocated for throwing people in cages for the very mandates they are caught violating.

Out of the gate, the Mayor of Chicago, Lori Lightfoot was one of the heavy handed local dictators who threatened to kidnap and cage people for violating her orders — unless of course, that person is her.

After implementing a lockdown and threatening jail for violators — even people who just wanted a haircut — Lightfoot was busted going to a salon to get an illegal haircut.

Lightfoot defended the decision by saying, “I’m the public face of this city and you know, I’m a person who [takes] personal hygiene very seriously and I felt like I needed to have a haircut. So I got a haircut.”

But that is not all. In November, Lightfoot announced another “stay-at-home” order which mandated that Chicagoans remain home except for essential reasons, stop allowing guests into their homes, even if they are family, avoid travel that is non-essential, and “cancel traditional Thanksgiving plans,” Lightfoot said on Twitter.

According to Lightfoot, you could not have a traditional Thanksgiving. But if she wanted to go to the Joe Biden victory gathering, at which hundreds of people would be screaming and in close proximity, this is fine and dandy.

In New York, Governor Andrew Cuomo has been seen on video and photographs disobeying his own orders — which have gotten average citizens beaten and arrested. He’s even been seen hugging people while maskless.

In California, Gov. Gavin Newson was caught and exposed flouting his own ridiculous strictures on eating in restaurants — not putting his mask back on between bites (yes, he really mandated this) — while breaking the size limit on gatherings. When he was caught dining at one of the world’s most expensive restaurants, he lied to the public and said the table was outside. But photos quickly surfaced, outing his lies.

Louisiana Gov. Jon Bel Edwards — while forcing bars to shutter across the state — was caught on video breaking the gathering size limit while simultaneously hiring a private bar company for a political fundraiser.

Even Gov. Grisham in New Mexico — who is now forcing grocery stores to close — has been caught breaking her own rules. During her mandated closure of non-essential businesses, she had a store open up so she could buy jewelry.

Dr. Anthony Fauci, who has been at the center of this entire debacle from day one — first telling Americans not to wear masks and then pushing for a nationwide mask mandate — is not free from this hypocrisy either.

After telling the nation to mask up, Fauci was seen at the MLB game between the Washington Nationals and the New York Yankees — not wearing his mask. When word got out, Fauci went on the offensive and called those who criticized him for it, “mischievous” and claimed to have pulled down the mask because he was drinking water. But the picture showed that wasn’t true, he had his phone in both hands — not a water.

In November, Austin, Texas Mayor Steve Adler issued guidelines telling people not to gather in groups of more than 10. Naturally, these rules did not apply to Adler who turned around and hosted a wedding and reception with 20 guests for his daughter at a trendy hotel near downtown.

Then, Adler issued a stay-at-home order, noting that “We need to stay home if you can. This is not the time to relax. We are going to be looking really closely. … We may have to close things down if we are not careful.” Again, this did not apply Adler, who then boarded his private jet bound for Cabo San Lucas, Mexico, where they vacationed for a week at a family timeshare.

Naturally, Adler claimed he did nothing wrong by breaking his own rules.

That is not all.

While Nancy Pelosi was caught in California getting an illegal haircut, Gov. Ralph Northam was caught maskless at Virginia Beach. He later apologized and said “I was not prepared.”

In one image, about two dozen people are seen mingling with one another in an ornate dining area while celebrating Scissura’s 50th. Only two of them are visibly wearing masks.

All of this was in spite of Gov. Cuomo’s orders limiting gathering to no more than 10 people and mask mandates.

In November, the Mayor of Denver, Michael Hancock told citizens to “avoid travel.” Less than an hour later, this hypocrite boarded a flight to travel to his family for Thanksgiving.

The hypocritical response by the government is not at all surprising as this is what government does — do as I say, not as I do. With political leaders flaunting their above the law status, it should come as no surprise that there is massive resistance to their mandates.

In my time in the Marine Corps, I learned one very important lesson about leadership. Successful leaders do not create more docile followers, they create more leaders. Successful leaders also do not lead by barking orders and telling people what to do, they lead by example. If Americans followed the examples of the alleged “leaders” in the examples above, we’d have a nation of sheep begging for their corrupt overlords to tell them what to do next. Oh, wait.