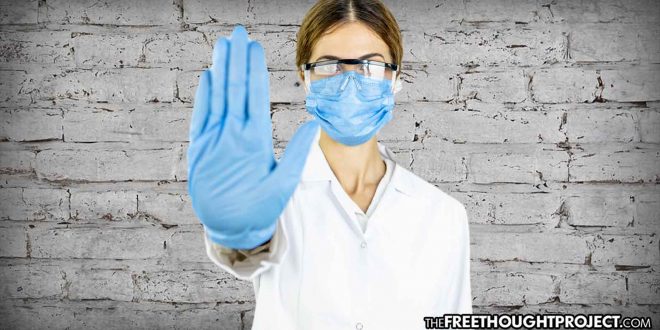 Many politicians, companies, and advocacy groups across the planet are celebrating the fact that governments have moved to fast-track the approval of COVID-19 vaccines from various companies. Many of these same people are also pushing to make the COVID-19 vaccine mandatory to continue normal life.

While mandatory vaccines may be music the ears of many, the idea of removing informed consent is chilling and should never be accepted by anyone who claims to support a free society. Nonetheless, across the country, dozens of bills have been filed proposing to expand, restrict or eliminate vaccine informed consent rights.

Many of the informed consent removal bills are for childhood vaccines like the measles. While it is never okay to mandate medication without consent, at least we have decades of science studying the effects of vaccines like MMR. The same cannot be said about the COVID-19 vaccine which was developed and brought to market in less than a year.

Undoubtedly, as this article is being written, “fact-checkers” are pining away in the darkness waiting to pounce on anyone who questions the safety of the vaccines. Despite government officials echoing the claims of the vaccine manufacturers that the vaccines are 90 to 95 percent effective, no one knows what will happen in the long term. By the very definition of the term, “long term effects” the long term results vaccine are completely unknown.

“I always make sure we say that [while] we know the short term and I’m going to call it midterm effects of the vaccine is now well understood, the very long-term safety is not yet understood by definition,” Dr. Moncef Slaoui, Trump’s vaccine czar said this week when stating that 10% to 15% of volunteers who took the vaccine, showed side effects that were “significantly noticeable.”

Side effects, according to the experts, are acceptable and should be expected with the vaccine and should not be a deterrent.

“We really need to make patients aware that this is not going to be a walk in the park,” Dr. Sandra Fryhofer of the American Medical Association told the CDC advisory group on Nov. 23. “They are going to know they had a vaccine. They are probably not going to feel wonderful. But they’ve got to come back for that second dose.”

Those working on the front lines of the the pandemic are expected to receive the vaccine first, and these talking points about the CVOID-19 jab are not sitting well with many of them.

Because they work on the front lines, healthcare workers are eligible to skip to the front of the line to receive the jab of the vaccine that was developed in record time. However, despite assurances from vaccine makers and their revolving door friends in the Food and Drug Administration, many of these front line workers are leery of this rushed product.

“I think I would take the vaccine later on, but right now I am a little leery of it,” nurse Yolanda Dodson, 55, who works at the Montefiore Hospital in New York City and spent the spring in the heart of the deadly fight against the virus told AFP.

“Vaccine studies so far “look promising but I don’t think there is enough data yet,” Dodson said.

“We have to be grateful to those who are willing to subject themselves to take that risk” to participate in the studies, she said. “It is a very personal decision.”

Indeed it is and this is why many in the government want to remove our ability to make that decision.

Others point out the dumpster fire that was the government’s response to the pandemic as reason for distrusting the vaccine.

Diana Torres, a nurse at a Manhattan hospital who saw several of her co-workers die of the virus this spring, said she’s suspicious of vaccines rushed for approval under the Trump administration, which she says has handled the entire pandemic like “some sort of joke.”

“This is a vaccine that was developed in less than a year and approved under the same administration and government agencies that allowed the virus to spread like a wildfire,” Torres said.

“They didn’t have enough time and people to study the vaccine,” she said. “This time around I will pass and watch how it unfolds.”

“They failed miserably with PPE (personal protective equipment) and testing and now they want you to be guinea pigs for the vaccine,” Torres friend added.

But critics of the skeptics tout the efficacy rates promoted by Moderna and Pfizer as reason to lower their defenses and line up for the jab.

Though the 90% efficacy rate touted by Pfizer is certainly welcome to many, the track record by those making this claim is less than stellar. Pfizer has paid out billions in health care fraud fines and in fact was party to the largest health care fraud settlement in US history.

The pharmaceutical giant paid out $2.3 billion in 2009 to resolve criminal and civil liability arising from the illegal promotion of certain pharmaceutical products

“Pfizer violated the law over an extensive time period. Furthermore, at the very same time Pfizer was in our office negotiating and resolving the allegations of criminal conduct by its then newly acquired subsidiary, Warner-Lambert, Pfizer was itself in its other operations violating those very same laws,” Mike Loucks, acting U.S. Attorney for the District of Massachusetts said at the time.

But that was only a single case, this company has a track record dating back decades that includes everything from bribing government officials to illegally testing products on children to making false claims about drugs and illegally marketing them — leading to multiple deaths. Despite making the largest payout in history, Pfizer has continued to be called to the carpet since 2009 multiple times for misleading the public about their drugs — up to and including vaccines.

Moderna has not been around long enough to get into much trouble, but other companies working on vaccines have track records similar to Pfizer’s. These include Johnson & Johnson, whose penalty total on Violation Tracker is $4.2 billion, AstraZeneca ($1.1 billion), GlaxoSmithKline ($4.4 billion) and Sanofi ($641 million).

Nevertheless, Americans have short memories and seemingly couldn’t care less about the criminal past of these companies pushing a vaccine that was developed and tested in less time than any vaccine in the history of medicine.

Americans would do well to research the last time a vaccine was fast-tracked with limited testing. As the Journal of the Royal Society of Medicine wrote in its peer-reviewed paper titled The Cutter Incident: How America’s First Polio Vaccine Led to a Growing Vaccine Crisis:

In April 1955 more than 200 000 children in five Western and mid-Western USA states received a polio vaccine in which the process of inactivating the live virus proved to be defective. Within days there were reports of paralysis and within a month the first mass vaccination programme against polio had to be abandoned. Subsequent investigations revealed that the vaccine, manufactured by the California-based family firm of Cutter Laboratories, had caused 40 000 cases of polio, leaving 200 children with varying degrees of paralysis and killing 10.

While a vaccine for COVID-19 would certainly be welcomed by many, the idea of rushing this in depth process which normally takes years or decades to complete, could prove to be utterly catastrophic.

“Getting safety issues wrong with a COVID-19 vaccine could set us back for years or even decades,” says vaccine expert Richard Malley, MD.

We should probably heed his advice.