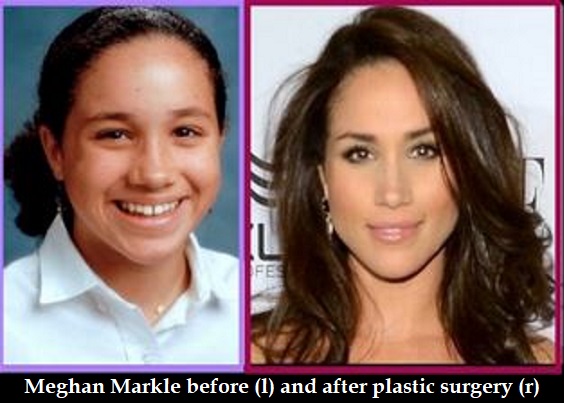 Before she married Britain’s dim-witted Prince Harry less than two years ago, Meghan Markle was a minor Hollywood actress in the cable TV show, Suits.

But she was more than an actress. Persistent rumors on the Internet (see here and here) say she was also a “yachter” — an actress or model, typically female, who supplements her income by prostituting herself on yachts owned by millionaires/billionaires. The term “yachting” however has been generalized to include not just prostituting on yachts, but sex-for-pay with wealthy men no matter the venue. (Urban Dictionary)

According to the National Enquirer, in 2017 after Harry and Meghan engaged to be married, MI5 scrubbed the net of Meghan’s salacious past, sealed her court and medical records, and silenced her friends and acquaintances with hush money and non-disclosure agreements (NDA).

But Markle was more than a yachter — she may be connected to the torture and sex-trafficking cult NXIVM.

Clare and her sister Sara Bronfman were heavily involved in the criminal NXIVM as financial backers, committed followers, and trainers. On April 19, 2019, Clare Bronfman pleaded guilty to conspiracy to conceal and harbor illegal aliens for financial gain and fraudulent use of identification. She faces several months in prison when sentenced.

Meghan, who lived in Toronto for 7 years as an actress in Suits, has the enthusiastic support of Canadian prime minister Justin “blackface” Trudeau. Trudeau recently grandly declared that Canada would pay for the hefty security costs of Meghan and Harry who announced they wanted to “scale back” on their royal duties to live in North America.

It turns out that Justin Trudeau also has a connection to the Bronfmans.

According to a report by The Guardian, Trudeau’s chief fundraiser and senior adviser is none other than another Bronfman — Stephen Bronfman, heir to the Seagram fortune, who was instrumental in Trudeau’s successful bid for the leadership of the Canadian Liberal party in 2013 and the premiership two years later.