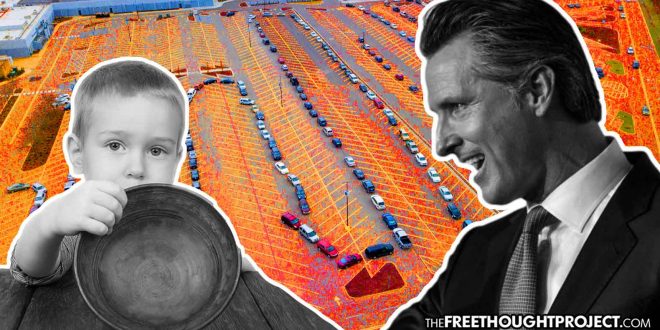 When the politicians on taxpayer funded salaries sit around and discuss which businesses to keep open and which businesses to shut down, they never consider limiting their salaries or cutting their funding. They simply force people out of business and offer nothing in return. In states that do offer some relief to shuttered businesses, the programs fall far short of the mark for small business owners, enrich already large corporations, or, like we reported out of California, puts millions in the pockets of murders, rapists, and child traffickers — some of whom are on death row. In the meantime, millions are facing unprecedented food shortages.

According to an analysis from Feeding America, food insecurity will hit 60 million people due to COVID-19 in the United States, which is an increase of 17 million people from pre-pandemic times. Supply line disruptions, lower levels of donations, and millions of unemployed people who’ve lost their jobs due to government-imposed lockdowns have created a massive strain on America’s food supply and more and more family’s are being pushed into a situation of food insecurity.

In the meantime, government leaders seemingly couldn’t care less about the plight of the people and continue to force business to close while offering zero support. Their callous attitudes and flouting of their own lockdown rules are almost palpable due to their brazen nature.

As California governor Gavin Newsom put thousands of businesses out of business, forever, he’s seen ignoring his own COVID-19 measures, dining with a dozen maskless people at a restaurant that averages around $850 per person.

Austin Mayor Steve Adler had the audacity to order people to stay home while getting on a private jet and taking off on an extravagant vacation in Cabo, Mexico.

The list of these pro-lockdown politicians rubbing their privilege into our faces is as long as it is infuriating. TFTP took the time to detail many of them. You can see that list here.

Because they aren’t worried about taking a pay cut or losing their taxpayer-funded jobs, government officials aren’t experiencing the stress like the rest of the nation as millions go unemployed and face food shortages.

More than 22 million people reportedly lost their jobs within just one month of lockdown orders being imposed, which was subsequently described as “the entire country being hit by a hurricane” and “by far the worst string of layoffs on record.” In April, it was reported that a record 30.3 million people were seeking unemployment aid. According to an estimate from Nicholas Bloom, an Economics Professor from Stanford University, around 40% of these “temporary” layoffs will likely be permanent. Unsurprisingly, this is having a terrible impact on the mental health of the population, after all, when you can’t even afford food, it is hard to maintain a solid mindset.

According to a report out of AP this week, some states have been hit especially hard: Nevada, a tourist mecca whose hotel, casino and restaurant industries were battered by the pandemic, is projected to vault from 20th place in 2018 to 5th place this year in food insecurity, according to a report from Feeding America.

In four states — Mississippi, Arkansas, Alabama and Louisiana — more than 1 in 5 residents are expected to be food insecure by year’s end, meaning they won’t have money or resources to put food on the table, the report said.

Feeding America has already distributed 4.2 billion meals in an 8-month period. That’s an unprecedented pace in the group’s history. The Associated Press analysis of most of the group’s food banks found a nearly 57 percent increase in food distribution compared with last year. Experts say Latinos, Blacks, households with, children and women are among those at greatest risk of hunger.

Millions of people are now waiting in long lines in a scene that is tantamount to the Great Depression. In Arizona, a 2-mile line of cars waited to receive food from St. Mary’s Food Bank for Thanksgiving. In Ohio, the Army National Guard helped with food distribution in the Akron-Canton region. During a drive-thru distribution before Thanksgiving, the line of cars stretched for a mile.

In rural California, where the governor who put people out of business dines on his $1,000 dinner, at least one food bank braced for a “food cliff” that could leave it unable to serve clients heading into the new year.

In Dallas, Texas, North Texas Food Bank (NTFB) distributed more than 600,000 pounds of food for about 25,000 people who waited in line for up to 8 hours to receive sustenance.

Examples like these are plentiful and in every single state in country.

The uncertainty and continuance of the lockdowns is not only leading to a food shortage but it is also having a heart wrenching effect on the mental health of children and adults alike.

In Arizona’s Pima County, officials have sent two health bulletins alerting doctors and hospitals to spikes in suicides. In Oregon’s Columbia County, the number of suicides by summer had already surpassed last year’s total. In the sprawling Chicago suburbs, DuPage County has reported a 23 percent rise compared with last year. And in the city itself, the number of suicides among African Americans has far surpassed the total for 2019, even as officials struggle to understand whether the deaths are being driven by the pandemic, racial unrest or both. What has shocked medical examiners in Chicago is the age range — from a 57-year-old deputy police chief to a 9-year-old child.

Americans are being pushed to the brink, and as a result, many of them are fighting back. Right now that fight is in the form of civil disobedience to lockdown dictates as business owners refuse to stay shutdown any longer. While the resistance is peaceful now, if the food crisis grows and more and more people face starvation, peace will be difficult to maintain.