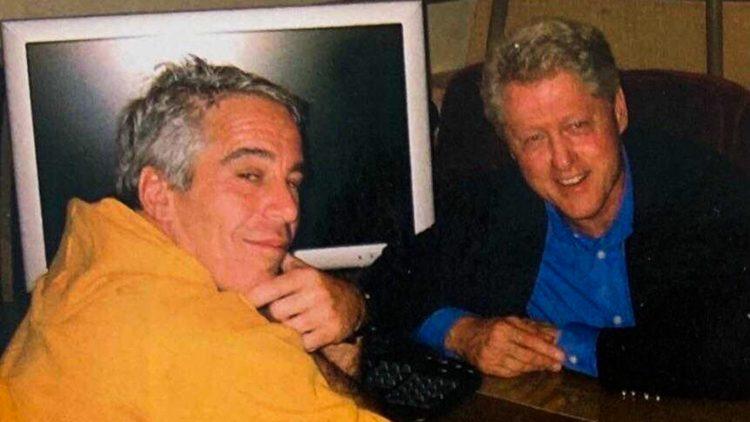 The bombshell that Clinton’s closest confidant confirmed the former president’s many trips aboard the “lolita express” has been totally ignored by the New York Times, Washington Post, NBC News, MSNBC, CBS News, and CNN.

A top Clinton insider has revealed that the former president visited the Caribbean home of notorious sex predator Jeffrey Epstein. In a long interview last week with Vanity Fair, longtime aide to Bill Clinton, Doug Band, noted that, contrary to the official line, his boss did indeed spend time on Little Saint James, the private island that the billionaire pedophile used as a base to traffick and rape women and children.

Neither Band nor his interviewer appeared to realize the gravity of what he was revealing, the subject being touched upon only briefly towards the end of a wide-ranging 7,000-word conversation in which he noted that in January 2003, Clinton flew on Epstein’s notorious “Lolita Express” private jet to the island. Band appeared to bring the incident up only as a way of distancing himself from the disgraced pedophile, who died under mysterious circumstances in a Manhattan prison in July last year. Band insisted that he knew nothing of Epstein’s misdeeds, but “got enough bad vibes that he advised Clinton to end the relationship,” refusing to travel aboard Epstein’s jet with his employer. Flight logs show Clinton made around two dozen trips on the infamous airplane.

Band is certainly a source in the know. For years he served as Clinton’s most trusted aide and confidant, traveling by his side and arranging his appointments for him. The former president famously did not carry even a cellphone, meaning that everyone from journalists to even Hillary and Chelsea Clinton would have had to go through Band to speak to him.

Wondering What to Do with Your Money Before the Jan 20

Band’s testimony adds weight to others who have already said they saw him on the island. Epstein victim Virginia Giuffre previously stated that Clinton “strolled into” Epstein’s private villa with “two lovely girls” in his arms. “There was no modesty between any of them,” she said. “I remember asking Jeffrey what’s Bill Clinton doing here,” Giuffre said in an interview earlier this year, “and he laughed it off and said ‘well he owes me a favor.’” Epstein’s former IT and maintenance contractor also said he saw the former president on the island, an assertion that Clinton has denied. The former president was also photographed receiving a massage from Epstein victim Chauntae Davies while at an airport, on route via the Lolita Express.

TRENDING:  This Is Why We Prepare: Terrorists Publish Plan To Strike A Critical Part Of America’s Infrastructure

While the press might be forgiven for focussing more on the pandemic and the election, the virtual silence from corporate media has been deafening. The bombshell that Clinton’s closest confidant — whom friends describe as being like a “son” to him — has been totally ignored by the New York Times, Washington Post, NBC News, MSNBC, CBS News, and CNN, with no relevant results appearing in searches on their websites. ABC News, which for three years sat on information that could have resulted in an arrest, also did not cover the story.

It was therefore left to more Republican-aligned, anti-Democrat media to play it up, the news appearing in conservative outlets like the Daily Wire, Fox News, and the New York Post. Unfortunately, this reinforces a partisan understanding of the Epstein case. Earlier this year, a MintPress study of one year of Epstein coverage on MSNBC and Fox News found intensely partisan coverage of the predator’s ties to Presidents Trump and Clinton. While MSNBC stressed his connections to the Republicans and downplayed his links to their preferred president, Fox News did the opposite, overwhelmingly focusing on the Clinton connections while failing to inform viewers about his relationship with the sitting president.

Clinton has a long history of accusations of sexual misconduct against him. Arkansas nursing home administrator Juanita Broaddrick claimed that he raped her in 1978 while he was Attorney General of the state. Paula Jones accused Clinton of sexual assault and exposing himself to her in 1991, while Kathleen Willey accused Clinton of groping her without her consent in 1993. On the last charge, he reportedly proclaimed his innocence by arguing that Wiley’s breasts were not big enough for him to be interested. He was also infamously impeached for lying about his affair with 22-year-old White House intern Monica Lewinsky. Trump, meanwhile, also has his own history of sexual misconduct, the Wikipedia page on the subject is nearly 10,000 words long.

Epstein was a convicted sex offender who was accused by dozens of women of trafficking, rape, or sexual assault, his crimes also involving a host of wealthy and well-connected individuals. His own enormous wealth appears to have come from his suspicious connection to Victoria’s Secret tycoon Leslie Wexner. For years, his links to the most influential figures and organizations seem to have kept him from justice, and, after his death, put the spotlight on them. Over the years, he built up a vast portfolio of connections to the rich and powerful all over the world, which included business magnates, heads of state, university professors, and some of the nation’s top journalists. Perhaps this explains why so few in the media are willing to touch the latest twist in this neverending story.

Alan MacLeod is a MintPress Staff Writer as well as an academic and writer for Fairness and Accuracy in Reporting. His book, Bad News From Venezuela: Twenty Years of Fake News and Misreporting was published in April.
Share
Tweet
Share
Pin