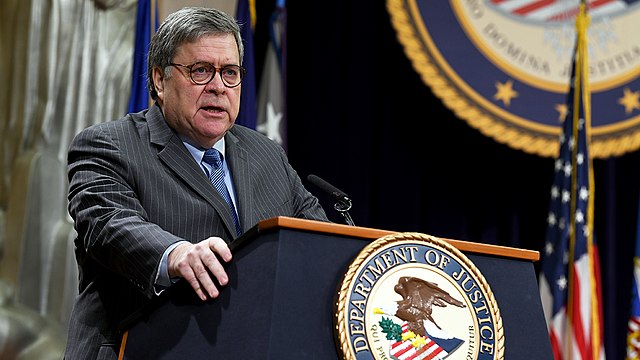 Attorney General William Barr announced his resignation on Monday in a letter to President Trump.

In the letter, Barr massaged Trump’s ego and announced he “will spend the next week wrapping up a few remaining matters important to the administration, and depart on December 23.”

Why didn’t Bill Barr reveal the truth to the public, before the Election, about Hunter Biden. Joe was lying on the debate stage that nothing was wrong, or going on – Press confirmed. Big disadvantage for Republicans at the polls!

The Wall Street Journal reported over the last few days that Barr personally ordered the DOJ to keep the Hunter Biden investigation under wraps.

From the WSJ on Monday, “Barr Kept Hunter Biden Probes From Public to Avoid Election Politics”:

Attorney General William Barr, in the weeks before November’s election, instructed prosecutors and senior colleagues to prevent word of investigations into Hunter Biden from becoming public and keep the Justice Department out of campaign politics, according to people familiar with the matter.

From the WSJ on Thursday, “Barr Worked to Keep Hunter Biden Probes From Public View During Election”:

One investigation became public this week after federal investigators served a subpoena on Hunter Biden. The subpoena sought detailed financial information in connection with a criminal tax investigation by the U.S. attorney’s office in Delaware, according to people familiar with the matter.

Federal prosecutors in Manhattan had also been looking at Hunter Biden’s business and financial dealings, as part of a broader criminal investigation that two people familiar with the matter described as an international financial investigation that had been going on for at least a year. Hunter Biden is implicated in that investigation but was never a specific target for criminal prosecution, the people said. They declined to provide details on the substance of the probe.

The federal scrutiny dates back to 2018, the people familiar with the matter said.

Barr claimed last year that Jeffrey Epstein died due to a “perfect storm of screw-ups.”

Barr’s father gave Epstein, who was a 20-year-old college dropout with no credentials, his first job teaching at the prestigious Dalton School in New York City

Barr failed to prosecute anyone involved in the RussiaGate conspiracy other than one low-level FBI lawyer and helped the DOJ successfully stall for four years without indicting any of the main co-conspirators.

The head of the DOJ unit that decided today not to prosecute Andrew McCabe testified in July that it was basically done investigating him and was "more in a decisional phase." pic.twitter.com/SSeUuB0LWN

While the BLM crowd was marching in Louisville, a U Haul truck pulled up with shields and supplies for the group to use. pic.twitter.com/VestCPdyTk

Barr did nothing to fight the discriminatory and Orwellian practice of “debanking” whereby online payment processors and banks are shutting down dissidents accounts over their political and religious views.

Barr also took no action to enforce obscenity laws despite requests from Republican congressmen to take action to protect children from “the prevalence of obscene pornography” online.

On the other hand, Barr did make sure to rush and announce the DOJ had found no evidence of widespread voter fraud “on a scale that could have effected a different outcome in the election.”

Barr did work together with Chris Wray’s FBI to prosecute Trump’s own far-right supporters for fighting with antifa.

Barr did push to end encryption online — which would effectively end internet anonymity.

Barr did allow Israeli spy Jonathan Pollard to flee to Israel after changing the terms of his parole.

Barr did refuse to release 9/11 documents to the families of the victims.

The move comes after President Donald Trump promised to help families, who accuse Saudi Arabia of complicity in the attacks. Barr says he cannot even explain why the material must stay secret without putting national security at risk. https://t.co/xEnpMkC4ZQ

Barr largely managed to avoid criticism from the right throughout his term thanks to the Q-Anon psy-op which convinced Trump supporters that “justice” was just around the corner if they simply Trust The Plan™ and ignore all the chicanery Trump administration officials were up to.

Remarkably, Q-believers are still acting like indictments are just around the corner.

Bill Barr is a Patriot. His letter to @realDonaldTrump was excellent. I believe Barr will announce major moves before 12/23 but does not want to stay to prosecute. He has done his job & served country well. New AG & assistants will prosecute the massive number of cases coming.

I’ve heard speculation that the “Q” psy-op may have been directed by Ezra Cohen-Watnick, who is currently the Acting Under Secretary of Defense for Intelligence.

Cohen-Watnick was brought into the Trump administration by Michael Flynn, who has done a lot of dog-whistling to Q-believers

Mike Flynn's sister tweeting out the Qanon hashtag three minutes ago. This tweet was liked by Mike Flynn Jr. pic.twitter.com/xHqhNgU4oD

I don’t know whether Cohen-Watnick was behind “Q” or not but it certainly wouldn’t shock me if that was the case.

Is covering up for the Epstein network and getting Joe Biden elected all part of the plan?

It seems to me that the deep state couldn’t ask for much more!