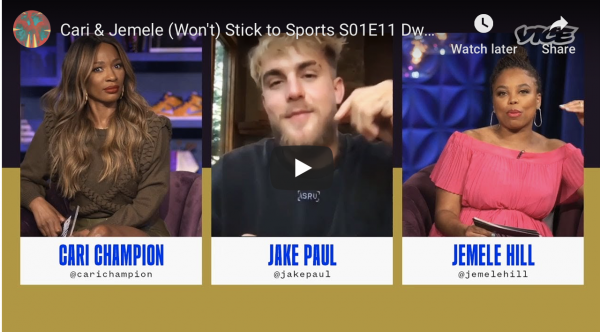 We have reached a point where a white pugilist competing against a black pugilist must immediately capitulate, because of the color of the formers skin.

Political correctness has reached such an extreme of absurdity that it is considered racist for a white guy to punch a black guy — even in a boxing match. Jemele Hill, formerly of ultrawoke ESPN, suggested during an interview that white boxer Jake Paul is racist for knocking out black opponent Nate Robinson.

Paul appeared on the show Hill co-hosts with Cari Champion, called Cari & Jemele (Won’t) Stick to Sports, in which the two regularly mix politics with sports.

During the interview, Hill asked Paul, “Considering where we are right now in our racial conversation in America, was what you did to Nate Robinson racist?”

“That is the question of the week,” Champion chirped before Paul answered.

At first, Paul couldn’t believe they were serious. But they persisted. Hill asserted that “it’s a sensitive time right now, we just had to witness a white man knock out a black man smooth out in front of all of America, and that’s why I asked that.”

Then Champion asked him the same question. To his credit, Paul failed to denounce himself for racism.

[B]efore moving on to other topics, Champion accused Paul of not being “woke” enough and refusing to be part of the “conversation.”

Liberals must not have eradicated the last vestiges of sanity, because Hill got enough public flak that she was forced to fall back on the lame “Can’t you tell I was only kidding” defense.

In the future, white boxers will be required to stand with their hands at their sides while black boxers pummel their faces. Even if this fails to create racial harmony, it will at least provide masturbatory material for Democrats.

Funny, white Americans are required to stand with their hands at their sides while their nation is pummeled.