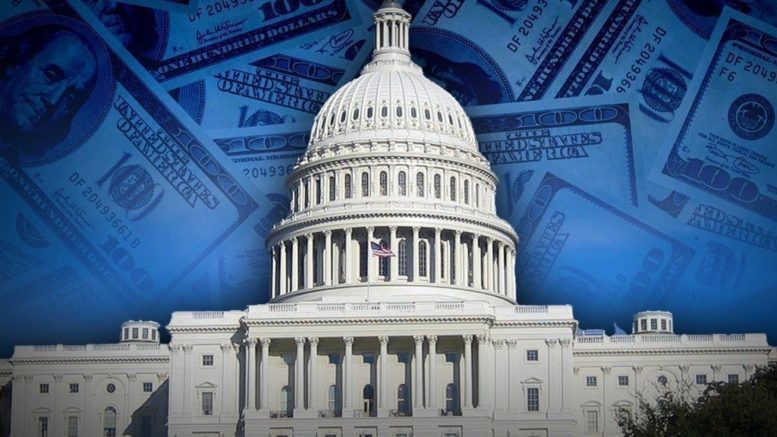 Within hours, Congress is set to vote on (and pass) a $900 billion Covid-19 aid bill that includes assistance for households and businesses, as well as funding for vaccine distribution and more. As discussed previously, the bill excludes the Republican priority of liability protections for businesses and other entities, and left the key Democrat demand of state and local bailouts.

In a nutshell, the new package extends federal UI programs (e.g. PUA, PEUC) with an extra $300/week for all UI claimants for at least an additional 11 weeks. 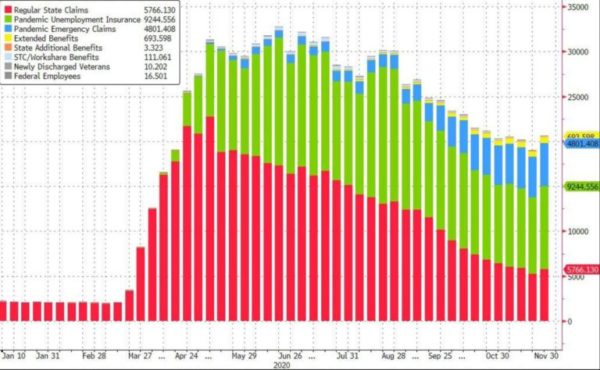 It also sends another round of stimulus checks worth $600 per individual per household for those making less than $75k ($150k for married couples) and gradually phases out at higher incomes. The bill renews funding for PPP to support small businesses and provides targeted aid to transportation and other hard hit sectors of the economy.  Similar to the prior bipartisan proposal, $325bn would go to small businesses support, including $284bn for a second round of PPP grants. Of note: the bill also allows businesses to deduct expenses paid with the first round of loans, which the Treasury had previously disallowed (i.e., a double dip). With around $525bn in forgivable PPP loans issued and more coming, this looks likely to reduce tax receipts by tens of billions and possibly more than $100bn, though it depends on the profitability of the businesses that received the loans.

It also provides additional funding for schools, healthcare, SNAP, childcare and various other programs. While the package excludes aid for state and local government and language around liability protection for businesses and schools as BofA notes, many of the provisions (e.g. aid for public transportation, schools, funding for vaccine distribution, testing and tracing) will channel aid to state and local governments

Here are the details of what is in the legislation. Direct Payments: The legislation would authorize a second round of economic-impact payments, following the checks Americans received in the spring and summer, at a cost of $166 billion. Households would receive $600 for each adult and $600 for each dependent, instead of $1,200 and $500, respectively, in the first round. Mixed-status households, where some people are ineligible noncitizens, would get payments based on the number of eligible people in the households, as opposed to being shut out as they were in the first round.

The payments would be based on income from 2019 and begin phasing out for individuals with adjusted gross incomes over $75,000 and married couples over $150,000. Treasury Secretary Steven Mnuchin said Monday that the first electronic payments could reach bank accounts by the beginning of next week. Households whose incomes were too high to qualify or who added dependents in 2020 might not qualify for full payments immediately. But they can request additional money as part of the 2020 tax returns they will file in early 2021.

Jobless Aid: Workers would be eligible for a $300-a-week federal unemployment subsidy. As with the prior aid package enacted in March, gig workers and others who don’t ordinarily qualify for benefits would be eligible for the jobless aid. The money is available through March 14. The legislation would also extend to 50 weeks the amount of time for which workers may claim benefits through both state and federal programs. Most states typically provide 26 weeks of jobless benefits.

Rental Assistance: The bill provides $25 billion of assistance to tenants in arrears on their rent. It also extends until the end of January 2021 a federal eviction prohibition, which the incoming Biden administration may extend again. The Treasury Department would be responsible for dispersing the rental assistance to states via a formula based on population. Landlords and building owners can apply on behalf of tenants meeting the eligibility requirements, generally those who make less than 80% of median income in their area, have at least one person in their households who has lost a job and can demonstrate they are at risk of losing their home.

Health Care: The bill includes $9 billion for health-care providers and $4.5 billion for mental health, as well as more than $1 billion for the National Institutes of Health to conduct Covid-19 research.

Testing and Tracing: States would receive $22 billion for testing, tracing and Covid-19 mitigation programs. Of this, $2.5 billion would be sent as grants targeting rural areas and communities of color.

Vaccines: States and federal agencies would receive funding for vaccine distribution. About $20 billion would go to the Biomedical Advanced Research and Development Authority, or Barda, for procuring vaccines and therapeutics. Nearly $9 billion would go to the Centers for Disease Control and Prevention and states for further distribution of the vaccine, and $3 billion is designated for the national stockpile. Included in those sums is $300 million that is directed to go to high-risk areas and to communities of color.

Airlines: Tens of thousands of airline employees would get their jobs back, at least for a few months, under the new bill, which includes $15 billion to cover airline salaries and benefits through the end of March. The bill also includes $1 billion for airline contractor payrolls. Airlines received $25 billion under the Cares Act in the spring to cover workers’ pay and benefits, and in exchange agreed not to lay off or furlough employees until Oct. 1. As that date neared without much improvement in their outlook, carriers and labor unions warned that job cuts would be coming and pleaded for another round of aid. When it didn’t arrive in time, they furloughed tens of thousands of workers, including 19,000 at American Airlines Group Inc. and over 13,000 at United Airlines Holdings Inc. The bill also includes $2 billion for airports and airport-based businesses.

Farms: The U.S. agriculture sector is set for another multibillion-dollar injection in the new relief bill, which directs $13 billion to crop farmers, cattle ranchers and rural communities. The new aid would come on top of roughly $46 billion that the U.S. Department of Agriculture projects the federal government will directly pay to the nation’s farmers this year, a record. That sum includes previous Covid-19 relief for farmers who had to plow up fields of produce ordinarily destined for restaurants, as well as hog producers who had to euthanize livestock because of pandemic-driven shutdowns at meatpacking plants.

Rail and transit: The bill would provide $1 billion in relief funds to Amtrak, aimed at helping the national passenger railroad avoid further layoffs and furloughs of its workers. Amtrak receives a regular operating subsidy of around $2 billion a year from the federal government, but its ticket revenue was devastated by the pandemic and lockdown orders. Ridership on some routes fell by more than 90% this year. The company says it will need a total of $4.9 billion in relief aid to get through the remainder of the year without deeper worker and service cuts. The bill also sets aside $14 billion for transit systems, many of which are considering major cuts in service and layoffs. In New York City alone, elected officials say they need an immediate $4.5 billion infusion to stave off severe reductions in subway and bus service. The bill also sets aside $2 billion for the bus industry and $10 billion for state highways.

Small Business: The $325 billion allotted to help small businesses includes $284 billion for first and second forgivable Paycheck Protection Program loans, and expands eligibility for local newspapers and TV and radio broadcasters. The bill also includes $20 billion for Economic Injury Disaster Loans. Businesses that received PPP loans would be able to take tax deductions for the expenses covered by forgiven loans, overcoming objections from Mr. Mnuchin. The provision would save businesses about $200 billion, according to an estimate from Adam Looney of the Brookings Institution. But it doesn’t count as part of the overall cost of the legislation.

U.S. Postal Service: The bill loosens some of the strings imposed on the U.S. Postal Service from the Cares Act, which provided a $10 billion Treasury loan after terms were negotiated. The bill would still provide $10 billion to the financially strained institution, but the Postal Service wouldn’t be required to repay it, and the conditions imposed by the Treasury wouldn’t apply. In exchange, the bill would require the Postal Service to provide more information to Congress, including a plan about its long-term financial solvency, within 180 days of the bill’s passing and information about how it plans to use the funds in reports to the Postal Regulatory Commission.

Taxes: Aside from the PPP break, the bill would extend a tax credit for struggling employers who keep workers on the payroll, and it would let recipients of certain tax credits qualify based on their 2019 incomes; in some cases, lower 2020 incomes could reduce their eligibility. The bill would also temporarily extend tax breaks for renewable energy, including incentives for wind energy and carbon capture. It also includes deductions for business meals, a provision that President Trump backed but that faced criticism from Democrats as a subsidy for three-martini lunches and indoor dining during a pandemic. Lower excise taxes on beer, wine and spirits that were set to expire Dec. 31 will be permanently extended, and tax incentives for investing in low-income areas and hiring workers from disadvantaged groups would be extended for five years.

Based on cost estimates of the various provisions and applying the corresponding fiscal multipliers (Chart 1), Bank of America estimates that the new stimulus package will contribute approximately 2.7% to growth in 2021. The bank now expects that more of the stimulus impact will be frontloaded into 1Q (Chart 2). The start of the year has cross currents with weaker economic data but an earlier and more targeted fiscal stimulus (we had expected passage after inauguration). On balance, the bank now sees upside risk to the bank’s forecast of 1% GDP growth in 1Q.

One final point: no more stimulus?

As we reported last week, Goldman’s economists believe that this is the last major COVID-focused fiscal package. Assuming that President-elect Biden is facing a divided Congress next year, this looks likely to be the last fiscal package that Congress passes worth several hundred billion dollars or more (as by 2021 Covid vaccines will be widely distributed making the passage of another broad-based stimulus virtually impossible). That said, Goldman does expect another debate over fiscal support in Q1, ahead of the expiration of the extended unemployment provisions in March. However, since Congress left the most difficult issues out of the current package, it seems unlikely that lawmakers will be able to agree on those in subsequent legislation. Of course, this would likely change if Democrats win both Senate seats in Georgia on January 5 and reach 50 seats in the Senate. In that scenario, Goldman would expect at least another few hundred billion in additional fiscal measures, including aid to states.