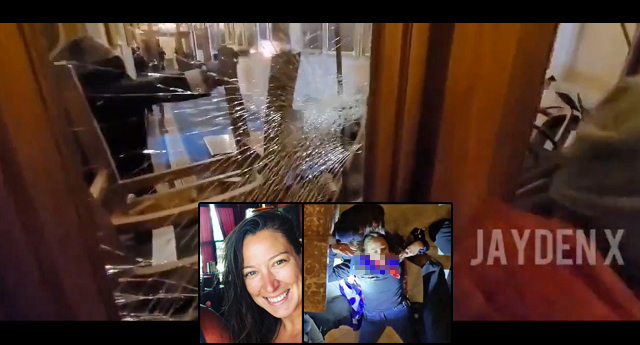 You can see the officer looked right at her before pulling the trigger. Additionally, there were cops armed with AR-15s right behind her.

Even leftists are saying this was a horrific crime which should be aggressively prosecuted:

GRAPHIC FOOTAGE: Police fatally shoot a Trump supporter inside the Capitol building. This is a sickening crime that should be prosecuted as such. pic.twitter.com/X8JK7HplJ7

Here’s additional angles of the shooting:

A young woman was just shot in the neck right besides me in the Capitol Building pic.twitter.com/hLQo4IP8J1

MSNBC aired footage of her being carried out on a stretcher covered in blood.

Ashli Elizabeth Babbitt, 35, was a wife and a 14-year veteran who served four tours with the US Air Force and worked as a high level security official throughout her service.

“Her husband says she was a strong supporter of President Trump, and was a great patriot to all who knew her,” KUSI reported Wednesday.