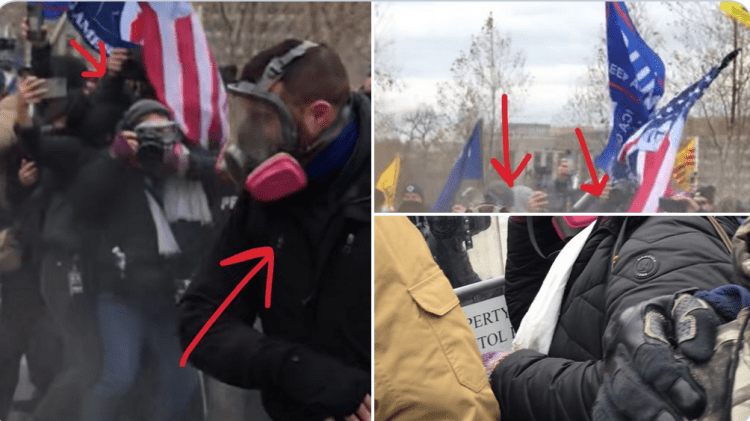 Well, more and more, it looks like The Washington Times was right, even though they issued an update stating that facial recognition had not picked up Antifa.

A retired military officer told The Washington Times that the firm XRVision used its software to do facial recognition of protesters and matched two Philadelphia Antifa members to two men inside the Senate.

The source provided the photo match to The Times.

One has a tattoo that indicates he is a Stalinist sympathizer. Many Antifa members promote anarchy through violence and want the end of America in favor of a Stalinist-state. “No more USA at all” is a protest chant.

XRVision also has identified another man who, while not known to have Antifa links, is someone who shows up at climate and Black Lives Matter protests in the West.

Born in Portland, Oregon, Antifa has mounted a year of violence in that city. The mayor said this week that Antifa is trying to destroy the town and called for tougher police measures.

Antifa, which is loosely organized nationwide, exports warriors to other towns.

Meet BLM criminal John Sullivan was arrested for threats and violence against conservatives in Utah!

John was interviewed on CNN about the film he took inside the CAPITOL of Ashli Babbit lying in a pool of blood dying – WHY was he there?

EXPOSED— ANTIFA was littered throughout the Capitol yesterday.

I am starting with John Sullivan, why? Because I know him. He is a Utah based Activist who leads insurgency groups. He claims to be a “Journalist” and is joking about Ashli’s death.

John’s “Insurgency USA” was one of the first groups I was able to successfully infiltrate. pic.twitter.com/Nt8JHNqDU7

I recognized this “press member” from Portland. She is known for setting up money shots and getting the PERFECT angle.

Let me show you! pic.twitter.com/AAm4GcYpkT

Here https://t.co/EKOQHs30Cp Shot is seen getting a PERFECT angle to get this entire clip of you guessed it… ANTIFA attacking the Police. pic.twitter.com/XT5CxSrcT7

Pay attention to the gas masks they use, see a pattern? There’s a reason.

ANTIFA hands out these masks and razor scooter helmets that they turn into “PRESS ID” by using tape and a sharpie.

They were littered EVERYWHERE throughout the crowd yesterday. pic.twitter.com/x2cpzj7Wun