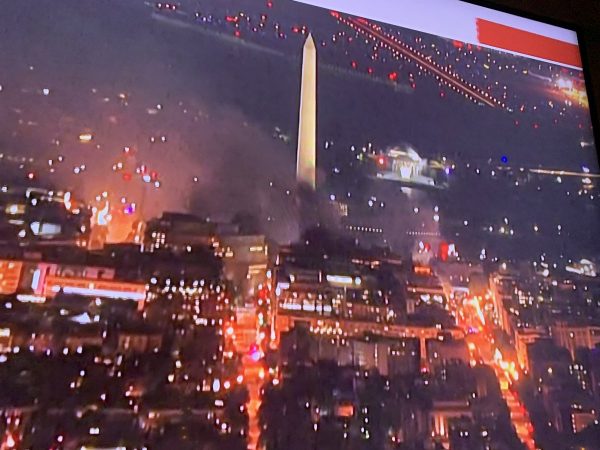 Previously on SBPDL: Her Name Is Ashli Babbitt: Unarmed White Woman (14-Year Air Force Veteran) Gunned Down By State During “Stop the Steal” Rally at Capitol in Washington D.C.

Chris Evans, the actor who portrays Captain America in Disney’s The Avenger movies, decided to interject himself into the debate surrounding the events of January 6, 2021 in Washington D.C., and the decision by patriots to storm the Capitol. He Tweeted, “Just think of the carnage had they not been white.”

Well, we do know of an event that happened in late May of 2020, when tens of thousands of Black Lives Matter supporters tried to rush into the White House (for who knows what purpose) and overwhelm Secret Service agents, all in the name of honoring a career criminal named George Floyd.

Remember Mr. Floyd? He once engaged in a home invasion in 2009, pointing a gun at a pregnant woman during this robbery.

So what happened that fateful night in Washington D.C. back on May 31? A full-blown insurrection in the name of a black career criminal… [At least 60 Secret Service members injured during George Floyd protests in DC, Fox News, May 31, 2020]:

The uprisings overflowed from Lafayette Park and continued near the White House on Saturday night and early into Sunday morning. Protesters in the area had taken to the streets since Friday to condemn police brutality.

Some demonstrators repeatedly attempted to knock over security barriers and vandalized six Secret Service vehicles, the agency said in a statement on Sunday.

Protesters threw bricks, rocks, bottles, fireworks and other items at officers and some Secret Service personnel were also “directly physically assaulted as they were kicked, punched and exposed to bodily fluids,” the statement added.

At least 11 employees were treated at local hospitals for non-life-threatening injuries.

“No individuals crossed the White House fence and no Secret Service protesters were ever in any danger,” the agency said.

President Trump said he “couldn’t have felt more safe,” from inside the White House on Saturday as agitated protesters defaced property and burned flags nearby.

D.C. police helped equip Secret Service agents with riot gear, including helmets, which are not a usual part of their protective gear, Chief of Police Peter Newsham said on Sunday.

“We certainly recognize and empathize with the outrage people feel following the killing in Minneapolis last week. The killing of George Floyd wasn’t the first. People are expressing outrage and demanding action,” she said. “We also recognize that we are proud of our city and do not want our city to be destroyed.”

“The Secret Service respects the right to assemble, and we ask that individuals do so peacefully for the safety of all,” the agency said.

These insurrectionists set fire to the 205-year-old St. John’s Church right across from the White House as well, all part of a true uprising in the name of a black career criminal.
So more than 60 Secret Service agents were injured in an event completely forgotten from the summer of 2020. What happened next? Corporate America gave Black Lives Matter $10 billion as tribute to the shock troops of establishment.

Yes, there was an attempted siege of the White House in late May of 2020, but it’s an event we aren’t supposed to remember.

It’s all about who/whom when it comes to perceived acts of insurrection or literal attempts to invade the White House injuring scores of Secret Service agents.

Oh, and Chris Evans: not one Secret Service agent opened fire on the massive crowd of black people during the Black Lives Matter siege of the White House in late May of 2020… so we already know of the ‘perceived’ carnage if they hadn’t been white. It adds up to scores of injured Secret Service agents, because shooting one black protester would have only enraged the conflict to the nth degree.

Meanwhile, a white woman was gunned down by an agent of the state on January 6, 2021…