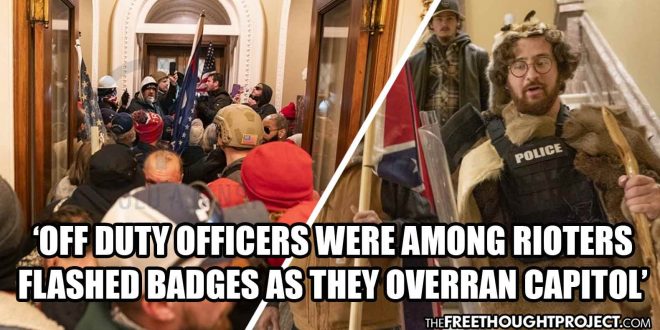 As the Free Thought Project reported this week, mainstream media outlets ran with headlines that police at the Capitol building were caught off guard and didn’t expect people to breach a series of fences leading up to the building. However, these protests were planned for weeks with Trump acting as the ring leader, instructing his followers to march on the capitol, carrying out plans that were publicly available on social media for weeks. Despite many on the right claiming Antifa was behind the violence, we are now learning something far more sinister was afoot.

It is now widely known that police officers removed the barricades after video emerged showing them removing barricades and allowing the rioters in to continue to the capitol steps.

In another video, Capitol police are seen waving the protesters in, directing them to the capitol.

In addition to the videos above, after the rioters were allowed into the capitol, quite literally storming through the front doors, the cops inside did very little to stop them. In fact, during a live stream, a cop was filmed taking selfies with one of the rioters.

Now, however, we are learning another reason the police were so friendly to those storming the capitol — they were cops too.

Briefly mentioned in a Politico article is the fact that a Metro D.C. police officer admitted that the mob of rioters who stormed the capitol on Wednesday were made up of off-duty cops.

One current Metro D.C. police officer said in a public Facebook post that off-duty police officers and members of the military, who were among the rioters, flashed their badges and I.D. cards as they attempted to overrun the building. “If these people can storm the Capitol building with no regard to punishment, you have to wonder how much they abuse their powers when they put on their uniforms,” the officer wrote.

Now that the word is getting out, Capitol police are facing backlash for, as Politico states, ” appearing to feed the rioters’ perception that they would not be severely punished for their behavior.”

“The fact is that it’s explicitly because they were white dudes with the support of the president that law enforcement basically did nothing,” one congressional staffer said.

But if cops were among those in the ranks, and were flashing their IDs to have fellow cops stand down, that would be far more sinister than cops showing white privilege.

When comparing other instances of police officers responding to protests, the treatment of the MAGA crowd in Washington becomes utterly disgusting.

After George Floyd’s death in May, multiple protests took place in Washington D.C. The overwhelming majority of them were peaceful with the exception of late night riots that took place after police escalation and unlawful assemblies declared. Basically, when protesters are kettled, cornered, tear gassed and pepper sprayed for the simple act of practicing their first amendment right, many of them will respond by fighting back.

However, prior to the anti-police brutality protests even starting in D.C., swarms of riot police, secret police, national guard, and metro cops were dispatched to the capitol. Hundreds of cops lined the streets and beat down citizens, many of whom had done nothing by exercise their first amendment rights. The MAGA folks saw the exact opposite reaction.

When Trump wanted to take a photo holding a bible, these heavily armed jackboots proceeded to open fire on peaceful protesters with pepper balls, tear gas grenades, and rubber bullets. In contrast, when hundreds of MAGA protesters tried to break through the barricades to get to Congress, police removed the barricades and took selfies with protesters.

In Standing Rock, when native Americans were taking a stand to protect their sacred land and protest for clean water, again they were met with rubber bullets, tear gas, and water cannons in below-freezing temperatures — not handshakes, selfies, and access to secure areas.

What’s more, when US veterans — who devoted their lives to upholding this system — attempted to peacefully protest the Iraq and Afghanistan wars in front of the US capitol, instead of being met with selfies and help, they were tackled to the ground and arrested.

Even the most vulnerable of protesters have been attacked by capitol police and posed absolutely no threat and broke absolutely no law.

When a disability rights organization, whose protest targeted a bill by Mitch McConnell to cut Medicaid for low-income Americans rolled into the capitol in their wheelchairs, Capitol police officers did not support them. Instead, they were dragged from their wheelchairs and faced mass arrests.

Nearly as many people in wheelchairs, peacefully protesting, and who entered the capitol legally, were arrested as were Trump protesters on Wednesday.

While there have certainly been far more damaging protests across the country, including in Washington D.C., the idea that police were involved in these makes it unforgivable. The level of hypocrisy it takes to beat people with batons for protesting police brutality while using your ID to storm the capitol is disturbing indeed. Hopefully, they are held accountable for their actions. But we won’t be holding our breath.