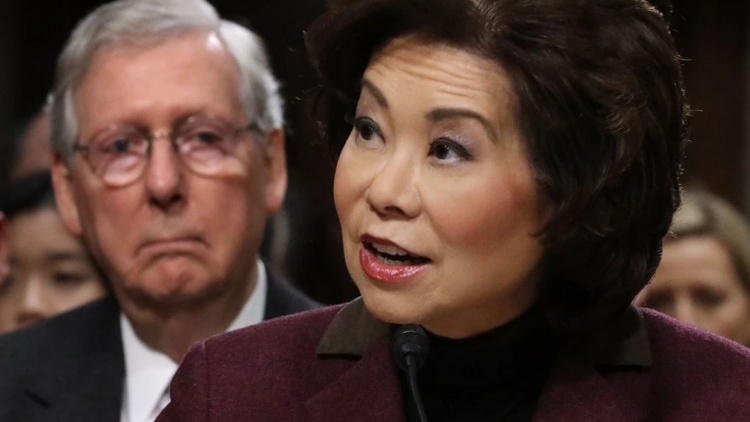 Ya don’t say!  Of course, how did no one know this?  Still, some seem completely ignorant when it comes to the corruption not only of the Democrat Party but the Republican Party as well!  Both must have the law applied to them and both must be removed from office in the best interest of the people and justice brought upon them for their corruption.  Sadly, the Trump administration was long on promises in the justice department, but short on delivering actual justice.

Schweizer said on Fox News Channel’s “The Next Revolution” that McConnell’s “position on China has softened over the years,” which he argued is due to the growing relationship between the Chinese government and the Chao’s company.

“Really, it goes to the fact that Mitch McConnell and Elaine Chao, his wife, are financially tied to the Chinese government,” Schweizer outlined. “And it comes through the shipbuilding company that Elaine Chao’s family owns. That relationship was forged in December of 1993 when James Chao, Elaine Chao’s father, Elaine Chao, and the new son-in-law, Senator Mitch McConnell, visited Beijing, China, at the invitation of the China state shipbuilding corporation. This was a coup to Beijing because Tiananmen square had happened just four years earlier. Very few high officials went there. The result of that meeting and the deals that followed is that today the Chinese government finances the construction of the ships for the shipbuilding company, they build the ships, they provide the crews for the ship, and they provide the cargo for the ship. So, the Chinese government could pull the plug tomorrow on this business. And the reason they’re doing business with them, let’s make it clear, is because Mitch McConnell is a very powerful figure in Washington, D.C. And the problem is, Steve, that his position on China has softened over the years the closer that this commercial relationship has become, and he’s a direct beneficiary of what this business does.”

According to Schweizer, this is the “strategy” of the Chinese government across the globe.

“They seek out political elites and give them commercial deals,” Schweizer stated.

“They are wedded to the Chinese,” he added. “They don’t want to anger the Chinese because they could destroy their families financially.”

7 Out Of 10 Americans DO NOT Want A Second Biden Term According To New Poll
July 3rd, 2022 Clash Daily